This issue of the USC US-China Institute's Talking Points newsletter highlights auto industry links between the U.S. and China. It also includes our comprehensive calendar of China-focused events and exhibitions across North America. 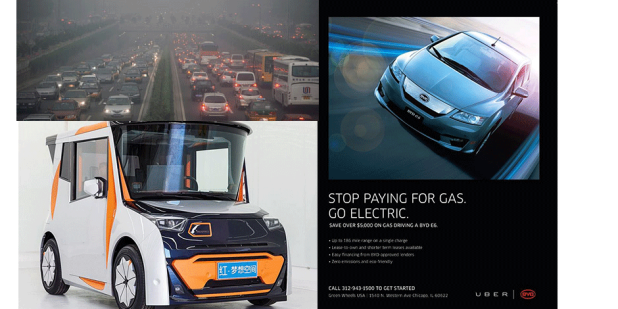 At the current Los Angeles Auto Show, a car from former BMW chief designer Chris Bangle has attracted a lot of notice. His REDS (revolutionary electric dream space) car for China Hi-Tech Motor, a company better known for textile machinery and commercial vehicles is about giving the owner space. The car is small, but it’s designed to be enjoyed even when it isn’t moving. It’s boxy and the seats swivel to form a discussion space, the navigation screen doubles in size for video or gaming. Is it the leading edge of a new trend? The rapid growth of China’s auto production and market and the push of the party-state to be a leader in new energy vehicles has the attention of the industry. 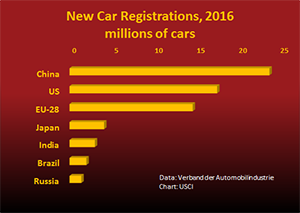 The first Los Angeles Auto Show 110 years ago featured 99 cars at a skating rink. The 2017 show opened on Friday and features 1,000 cars from all over the world. In 1907, the Chinese auto market was tiny, but it has been the largest market since 2009 and in 2016, more than 6 million more new cars were registered there than in the United States. McKinsey projects that half of the growth in the global auto market through 2022 will come from China. Sales of small sport-utility models are growing fastest. Consumers replacing their cars or buying second cars are choosing more expensive models.

China has also become the world’s largest producer of vehicles. It turned out its first vehicle, the Liberation 解放 truck in 1956 and now produces a wide range of cars including no-frills models that go for less than $5,000.

The big stories at the LA Auto Show this year are new energy vehicles (NEVs, including hybrids and plug-in electrics) and increasingly autonomous vehicles. Eager to 1) improve China’s urban air quality, 2) reduce dependence on imported oil, and 3) be a leader in an important green tech arena, China’s leaders have issued directives and provided incentives to support NEV production and consumption. And they’ve seen results, with Chinese buying 40% of all the NEVs sold worldwide in 2016. Subsidies have included no sales tax, rebates and free licensing. The party-state’s Made in China 2025 target is for Chinese brands to sell 70% of the NEVs sold in China by 2020 and for at least two Chinese brands to be among the top ten global NEV brands by 2025. The least expensive NEV is the Zoyte cloud, which goes for $9,400 after subsidies. BYD’s e6 is the biggest seller. In 2016, BYD sold 25% more electric cars than Tesla. Some Uber-users in Chicago have ridden in e6s there. In a pilot program, drivers lease the BYD cars, but don’t pay for fuel.

Ford was relatively late in going to China, but it is anxious to make up for lost time. In November Ford announced it would partner with Zotye to make electric cars in China. Yesterday, Ford’s Executive Chairman Bill Ford said in Shanghai, “China is not only the largest car market in the world, it’s also at the heart of electric vehicle and SUV growth and the mobility movement.” The company said it would offer 15 different NEV in China by 2025.

Later today, Ford is expected to announce a collaboration today with Alibaba to use the ecommerce giant’s new “Automobile Vending Machine” to select, test drive and buy cars. Ford dealers would service the cars, but Alibaba, not Ford, would make money through Alipay financing.

In Los Angeles, the trend towards cars able to pilot themselves is very much on display. Google and Tesla are well-known in this arena, but China’s Baidu has also been pushing forward with its Project Apollo. Ford is a partner in that effort. Today, JD.com, China’s second largest ecommerce company, announced it was entering the race by investing in a separate research and development effort in Hunan. It sees building an autonomous shipping and delivery fleet as an enormous competitive edge. Las Vegas has a driverless shuttle bus and yesterday a state-owned company tested driverless buses in downtown Shenzhen.

One of the trade frictions between China and foreign countries is the requirement that foreign companies can only produce cars in China in 50/50 partnerships with state-owned companies. The most popular models produced and sold in China are nearly all from these joint ventures, beginning with the Hongguang. It’s been the top selling model for five years and comes from the Shanghai Auto/General Motors/Wuling joint venture.

Geely is China’s largest private automaker. Along with the Shanghai Auto/General Motors joint venture, Geely is exporting cars to the U.S. Geely is exporting a Volvo model (having purchased Volvo from Ford in 2010) and Buick has sold 200,000 Envisions in the U.S. this year. Iran is the number one destination for Chinese auto exports. The U.S. is a distant fourth after India and Vietnam. The largest share of American auto imports wear U.S. brands and come from Canada and Mexico. Slovakia, South Africa, and Hungry export more cars to the U.S. than China. China, however, the value of China's car parts exports to the U.S. is far higher than its auto exports.

Geely will be the first Chinese company to build a new auto plant in the U.S. (BYD assembles electric buses near Los Angeles.) It plans to build Volvos in South Carolina for sale in the U.S. and export to China. Many Americans will be surprised to learn that South Carolina has already been exporting BMWs and Mercedes Benzes to China. Germany and the U.S. are the top auto exporters to China, each selling $12 billion in cars in China in 2016. The U.S. auto market is largely open, with tariffs under 3% for passenger cars (20% for light trucks). China’s imposes a 25% tariff on auto imports – another source of friction between China and auto-exporting countries.
The auto industry has long been globalization's poster-child. One of the first large American investments in China was the AMC Jeep joint venture in Beijing. The Jeep brand still has cachet in China. Now owned by Fiat Chrysler, Jeeps are produced on four continents, including plants in Hunan and Guangdong in China.

Thank you and best wishes,