New Pew survey notes that most Chinese are concerned about many economic and social issues, but are certain that others already think well of China and that those views will become even more positive with the success of the Beijing Olympics 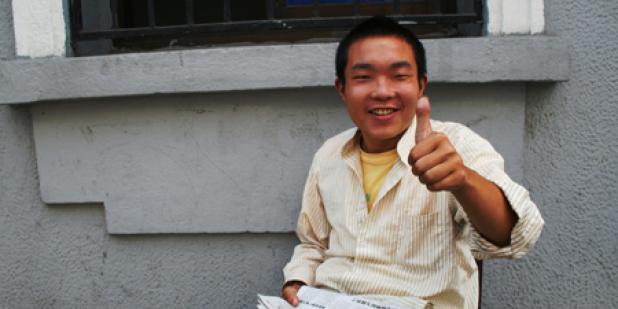 In 2008, the Pew Research Center carried out surveys in 24 countries on residents’ views of their country’s general direction and their country’s economy. Of those surveyed, it’s the Chinese who have the most positive view. This is a major change since the Center’s 2002 poll. Then, 48% of Chinese said they were satisfied with the direction China was heading and 52% said the Chinese economy was good. This year, 86% indicated satisfaction with the country’s direction and 82% said the economy was good.
In stark contrast, overwhelming numbers of Americans told Pew surveyors they felt the U.S. was not headed in the right direction (77%) and that the American economic situation was poor (80%).
When asked about their own lives, Chinese were still positive, though no more positive than in 2002. In terms of satisfaction with their family lives, 81% said they were very (14%) or somewhat (67%) satisfied. This was a slight drop from 82% in 2002. Nearly two-thirds (64%) said they were very (4%) or somewhat (60%) satisfied with their jobs. This is just higher than the 63% who responded positively to the question in 2002. The share indicating satisfaction with household income increased more substantially from 51% in 2002 to 58% this year. Only 4% said they were very satisfied, but 54% indicated they were somewhat satisfied. Chinese are generally less satisfied with their own lives than people polled by Pew in other countries in 2007. Not surprisingly, levels of satisfaction rise with levels of education and income. For example, three out of four of the college graduates surveyed said they were satisfied with their jobs.
The survey was carried out via face to face interviews with 3,212 adults in late March and the first half of April. This coincided with a dramatic rise in nationalist sentiment in response to civil unrest in Tibet and protests in Europe and the Americas during the Olympic torch relay. It preceded the devastating May 12 earthquake. Pew analysts concede that China’s urban residents are over-represented in the survey.
The Pew survey clearly illustrates how unequal economic development is experienced by Chinese. Responses to questions on life satisfaction and ability to afford food, utilities, and health care varies greatly depending on the education and income level of the respondent and whether he or she lives in a city or in the countryside or is in the richer eastern part of the country. For example, nearly one in four (23%) of the respondents from western China indicated that paying for food was difficult, whereas only 10% of those in the east said that it was difficult. 27% of those in western China said unemployment was a problem, but only 16% of those in eastern China felt this way. Central China produces most of the nation’s coal and more than eight out of ten people (84%) there are worried about air pollution. Environmental concerns are widely shared, though, and 81% indicated that protecting the environment must be a priority, even if it requires slower economic growth and layoffs.
Even though three decades of economic reforms have affected them somewhat differently, an overwhelming share of Chinese support free markets. Seven out of ten Chinese said they agreed that “people are better off in free markets.” Even in the poorer west, 62% expressed appreciation for free markets. At the same time, most Chinese feel that individual success is not primarily the result of individual action. Most (62%) said individual success was determined by forces “beyond an individual’s control.” This is in contrast to the nearly two-thirds (64%) of Americans who feel that success is mostly within one’s own control.

According to the survey results an overwhelming majority of Chinese believe that rising prices, the gap between rich and poor, official corruption, air and water pollution, and unemployment are big problems. In each case, more than two-thirds of those surveyed identified those issues as very or moderately big problems.
Official statistics put inflation at about 19%, with the rise in foodstuffs much higher. 72% of those asked said that rising prices was a very big problem. Another 24% said it was a moderately big problem. Almost half of those questioned (48%) said it was hard for them to pay for health care. The gap between rich and poor was held by 41% to be a very big problem and 48% to be a moderately big problem.
Other issues described by a majority of Chinese as very or moderately big problems include business corruption, crime, working conditions, product quality, old age insurance, and health care. Almost half identified food and medicine safety as big problems (49% and 46% respectively).
The high percentage of people concerned about product quality and safety is striking, since only 16% of those surveyed indicated they had heard anything about Chinese product recalls.

The survey was conducted when protestors were using the occasion of the Olympic torch relay to criticize Chinese governmental policies and practices toward Tibet and other issues. Nonetheless, virtually all Chinese (96%) polled felt the Beijing Olympics would be a success. More than half (56%) said the Games would be very successful. Eight out of ten Chinese (79%) said the Games were important to them as individuals. Three out of four Chinese (77%) already feel that foreigners have a positive view of their country, but a remarkable nine out of ten Chinese (93%) expect the Olympics to further improve China’s international image. Attitudes such as these reflect and further reinforce the attention to the Games in China’s media. At the same time, a rising share of Chinese (34%) feel that the saturation coverage has been too much. Only 25% felt that way in 2008. In Beijing, almost half of respondents (46%) said the Games and preparations for them were being over-reported. Most Chinese expect the nation’s athletes to shine during the Games. 75% anticipate that Chinese will win the most medals. In Beijing, though, only 58% expect Chinese to earn the most medals.
While most Chinese believe others have a positive view of China. Pew surveys in 23 other countries indicate this isn’t the case. In only seven of those countries did a majority say they had a positive view of China. In ten of those countries, China’s standing has dropped since 2007. Eight out of ten Chinese (83%) believe China considers other countries’ interests in determining its foreign policy, but only three out of ten of those surveyed in other countries felt this way.
Most Chinese (55%) feel that China’s economy has a positive impact on the world, though most (79%) understand that China isn’t the leading economic power. A significant majority (58%) expect China to replace the U.S. as the leading superpower.
Pew pollsters asked Chinese respondents whether they considered the U.S., Japan, and India as enemies of partners. More than a third of respondents described the U.S. and Japan as enemies.
Most Chinese (69%) have an unfavorable view of Japan, in large part because 76% believe Japan has not sufficiently apologized for its aggression more than half a century ago. While a significant number of Chinese see the U.S. as an enemy, a significant number (41%) have a favorable impression of the U.S.
China’s economic rise and the expansion of domestic economic opportunities has profoundly influenced attitudes toward the importance of studying English. Whereas in 2002, some 66% of respondents said they completely agreed with the view that “children need to learn English in order to succeed in the world,” now just 33% feel this way. Some 77%, though still at least partially agree with the statement (a drop from 92% in 2002).
Another important survey findings include the centrality of television as a news source (88% identified television as their preferred choice for news, another 8% listed it as a second choice). Even among those with their own computers and internet access, television is still the overwhelming choice (95%) for news. This confirms surveys conducted by the Chinese Academy of Social Sciences and other entities. While the internet is increasingly popular it is primarily utilized for entertainment, not news acquisition. At the same time, the internet’s role as a forum for discussion was not explored in this study.

Other USCI survey summaries are available: