School may never be the same

90% of the world’s 1.5 billion K-12 students are unable to go to school. We examine what digital learning looks like in the U.S. and China and how Chinese schools are updating safety protocols as they invite students back through their doors again. 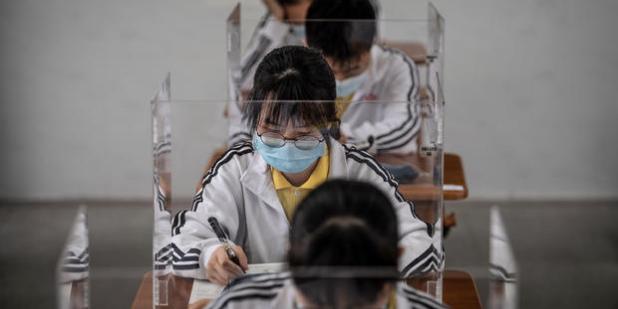 Like many U.S. colleges and universities, USC finished its spring term online  and held a virtual graduation for 19,000 students, streaming the event in English, Spanish and Mandarin. Most Chinese universities remain closed to students as well, instead offering online courses. In China, K-12 students are returning to class, but elementary and secondary schools in most of the U.S. and elsewhere remain closed.

In early April, The Lancet estimated that more than 90% of the world’s 1.5 billion K-12 students were not in school. Two weeks ago, The Economist editorialized that reopening schools had to be a top priority. Despite efforts to expand online programs (added data caps, temporary free access), there’s widespread acknowledgment that online programs developed in a rush don’t measure up and that poor children are especially likely to fall behind. America’s second largest school district, Los Angeles Unified is planning to expand summer programs to help students catch up. Some American students have not done any schoolwork since the “safer at home” orders were issued in mid-March.

China, unlike the U.S., has a national curriculum and has systematically worked to deliver instruction even in remote areas. Tsinghua University has provided lessons via satellite to thousands of remote schools and now broadband internet connections reach most corners of the country (though many families can’t afford at home access). China’s always used televised lessons (TV University was set up in 1979, morphing into the Open University in 2012). Seventeen years ago, the SARS outbreak closed Chinese schools. In Beijing, educators and broadcasters teamed up for the “Classroom of the Air.”

This year, most primary school students in China relied on televised lessons while many secondary schools created online programs. China’s robust live streaming platforms hosted a variety of lessons. As in the U.S., however, distractions are abound and parents worry about their businesses and jobs. The party-state worked with private companies and added K-12 curriculum lessons to the Learn for Strength and Wealth under the Communist Party’s Central Publicity Department. The Ministry of Education strengthened its existing online resources. The Ministry recognized, however, that some schools and teachers might have wanted to give their students an edge on upcoming exams. On Feb. 4, it directed schools to focus on review and not introduce new content during the extended winter holiday. The Ministry also cautioned parents not to put undue strain on students during this trying time.

The European Centre for Disease Prevention and Control found that child-to-adult transmission “appears to be uncommon"; nevertheless, reopened schools in China have introduced new protocols to keep students and teachers safe. Kindergarteners in Yongzhou have their temperatures taken and shoes disinfected before they enter. Desks in Wuhan classrooms have been moved 3.3 feet apart. Class sizes in Beijing have shrunk from 30 students to just 20. Video of one school's extreme sanitation protocol went viral, showing up in the U.S. on The Daily Show. The U.S. Centers for Disease Control is catching up. It’s had handwashing videos are available and yesterday released guidelines for schools.

Since every year of schooling adds, on average, nearly 10% more in annual earnings later, missing classes can have lifelong consequences for children. As the fall approaches, school districts will have to balance the costs and inconvenience of new safety protocols to ensure that all students have an equal opportunity to learn. If COVID-19 becomes a seasonal illness, these changes may be here to stay.

More on Education in China: