The Olympics Return to Beijing

Beijing becomes the first city to host both summer and winter games. International scrutiny of Chinese policies and practices has increased since the 2008 Summer Olympics.
February 3, 2022
Print 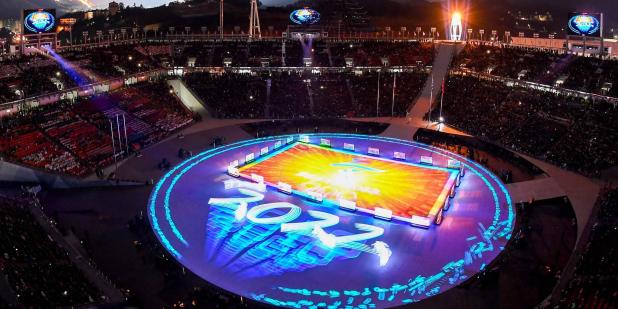 When Beijing hosted its first Olympics in 2008, it was seen as China's return to the international stage. At the time, one big concern was the impact of air pollution on the athletes (interviews, statistics). In addition to building several major venues and an Olympic Village, China initiated pollution controls and other measures to prepare for the games. There were minor issues with lip-syncing and the ethnicity of those dressed in ethnic garb for the opening ceremony, but in general the opening overseen by famed film director Zhang Yimou and choreographers Zhang Jigang and Chen Weiya wowed audiences worldwide. The Games came off smoothly, were attended by world leaders, including U.S. President George W. Bush and his former president father. Already the world’s second largest economy, China seemed very much on the move. In 2008 and 2009 Gallup polls, a plurality of Americans identified China as the leading economic force in the world.

Some of the 2022 competitions have begun, but the opening ceremony is tomorrow. Beijing’s “Bird’s Nest” stadium is again the venue and Zhang Yimou is back as the director. It will be a shorter and smaller extravaganza, with 3,000 performers compared to 15,000 in 2008. Covid-19 worries necessitated the paring back. But the geopolitical climate is chillier than the Beijing air temperature. The U.S. and a number of other countries won’t send top representatives to attend. They are protesting Beijing’s treatment of Uyghurs and other Muslims in Xinjiang. China’s party-state was willing and able to improve air quality in the capital for the event, but it considers strengthening controls in Xinjiang and elsewhere a matter of national security. Initially denying the existence of detention centers, Beijing subsequently described them as vocational schools. Critics say China’s government is working to “sinicize” Uyghurs. Beijing says it wants to increase Uyghur employability and bring about social harmony. Chinese authorities have stressed that athletes and others risk punishment if they engage in “political acts” during the Gamers. Some athletes may not join the opening ceremony as a silent protest.

Chinese Americans are among the most prominent athletes at this year’s Games. Six-time U.S. National Champion figure skater Nathan Chen 陈巍 placed third at the 2018 Games in PyeongChang, South Korea. Chen is a student at Yale University. Karen Chen finished 11th in 2018 and is taking a break from her Cornell University classes to compete. The youngest member of the U.S. team, Californian Alyssa Liu 刘美贤 is just 16, but she won the first of her two U.S. National Figure Skating Championships when she was only 13. She had to petition to make the team, though, after contracting covid-19 in early January.

But the Chinese American athlete that has garnered the most recent press attention is 18 year old Californian Eileen Gu 谷爱凌. She is currently a dominant force in freestyle skiing, winning  numerous competitions and is a gold medal favorite for these Games. She’s also a model representing major brands. Still, much of the attention lavished on Gu is her choice, beginning in 2019, to represent China in competitions. Fluent in English and Mandarin, Gu is headed to Stanford University in the fall. She has condemned anti-Asian speech and violence in the U.S., but has avoided discussing human rights issues in China. Speaking with the South China Morning Post last year, Gu rejected the idea she had to be either American or Chinese, "Nobody can deny I'm American,... nobody can deny I'm Chinese."

Gu isn't the only foreign-born athlete on the Chinese team. American Jeremy Smith and Canadian Ryan Sproul are joined by sixteen other players on the men's ice hockey team who were born or grew up in North America. They are eager to compete at this level and qualify by having played for a Chinese professional team.

Beijing is the first city to host both a summer and a winter Olympics, despite the need to rely on artificial snow. The number of places seeking to take on the costs and challenges of staging such large but short events is shrinking. Several cities prepared bids to host the 2022 Games, but all but two dropped out. Beijing beat out Almaty, Kazakzstan for the Games. Almaty was wracked by violent protests in January. Its airport only reopened two weeks ago. China’s leaders wanted these Games to spark greater domestic interest in winter sports and recreation and to demonstrate China’s innovation and organizational prowess. The charts below show the expansion of the ski tourism in China.

About 90 countries and regions have sent athletes to the Games. The U.S. has one of the largest contingents, sending 222 athletes. Because of the pandemic and the time difference, NBC is keeping many of its prominent announcers and commentators in the U.S. Politicians and activists have called on the network and Olympic sponsors to condemn Chinese government practices in Xinjiang and elsewhere. But some companies which have implicitly criticized those practices by saying they do not and will not utilize products from Xinjiang have been subject to pressure from Chinese state and social media. NBC and sponsors note that they contract with the International Olympic Committee for packages of Games and support the Olympic mission of promoting peace, friendship and fair play.