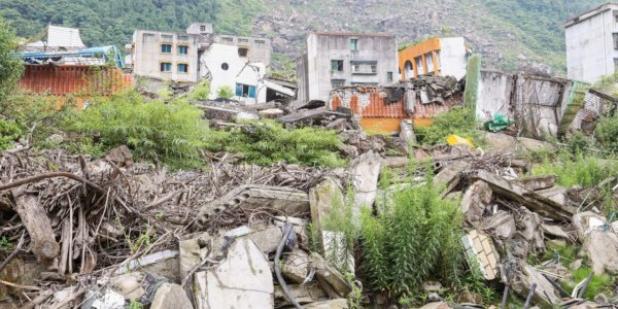 On a summer afternoon in May 2008, the Sichuan province of China was hit by one of the deadliest earthquakes in human history.

Thousands were injured and killed, millions left homeless; the subsequent landslides and river blockages tallied up to the largest number of geohazards ever recorded. Tremors were felt all the way in nine other countries.

Disasters of such scale inspired Nan Li — an associate professor in the Department of Construction Management at Tsinghua University and a 2014 USC Viterbi Ph.D. from the Sonny Astani Department of Civil and Environmental Engineering — to uniquely approach disaster prevention and mitigation through the concept of “urban resilience.”

In 2018, his philosophy of “Build Back Better” earned him a spot on  MIT Technology Review’s selective list of top 35 “Innovators Under 35” in China.

Li’s work looks at the entire event cycle of a disaster and focuses on the recovery stage.  He is the primary contact in China for the 100 Resilient Cities initiative supported by the Rockefeller Foundation. Focusing on two cities, Deyang, an earthquake-prone city in Sichuan, and Huangshi, which faces resilience challenges of pollution, water supply and a growing economy, Li is developing a plan that would enable these cities to bounce back after a disaster with millions of lives at stake.

A system of systems

Consider the sequence of events during the Puebla earthquake, which struck Mexico in 2017. Nearly five million people were left without power. Buildings collapsed and caught fire. Gas leaks were reported and dust plumes enveloped Mexico City. The international airport and city metro service were not in operation for several hours.

Clearly, Mexico City’s “lifeline systems,” such as its transport system and power supply were interdependent. The impact may have begun from a small region within the power grid, but propagated to other systems that depended on it for functioning. The scale was devastating.

So far, lifeline systems have only been studied in isolation but Li poses a critical question: “How do the interactions between these systems impact their capability to deal with extreme events?”

The making of a resilient city

Through Li’s eyes, a resilient city doesn’t just try to prevent disasters, but is able to rebuild itself intelligently after disaster strikes.

The heart of Li’s work is to explain how all the lifeline systems within a city are interconnected and use this newfound knowledge to identify reconstructions which have the most global impact. Li described it as “optimizing the recovery process of a city” by discovering the best way to allocate resources.

With his tools of complex networks and data analysis, Li models ripple effects to find “critical nodes and paths” that demand more attention when extreme events happen. The impact on these critical nodes can be predicted.  “And if we can predict it,” Li said, “We can stop the impact from propagating.”

“News channels report the damage of a hurricane as say, $300 million,” said Professor Lucio Soibelman, chair of the Sonny Astani Department of Civil and Environmental Engineering and Li’s secondary Ph.D. advisor. “They report it that way because it represents the cost of rebuilding the bridges that fell. This is wrong. What about the cost of longer commutes of the working population? What about the hidden costs of extra fuel, tire maintenance, and productivity?”

When the real cost of a disaster is known, we can address questions like: if 20 bridges were destroyed, which ones should you rebuild first? Said Soibelman, “This is the essence of urban resilience – how you bring the system back as fast as you can, and in the best way possible.”

Li credits his achievement to the training and research experience he received while at USC.

“She’s always been my role model,” said Li, whose current work expands upon his Ph.D. thesis at USC Viterbi, for which he won both the 2014 Best Dissertation Award and Ph.D. Achievement Award. Li’s thesis used sensor networks to track people in buildings during emergencies to locate the first responders and trapped occupants in real-time.

USC and Tsinghua University are presently in collaboration, with Li working on the infrastructure and systems aspect, Becerik-Gerber on the influence of design on behavior and intelligent environments for human-building interaction, and Soibelman providing expertise in big data and computation.

The mind and the building

Disaster mitigation has another crucial element: the people. At the urban scale, Li observes how people move during an emergency. Are they evacuating? Are they staying at home? Are they taking a diversion?

Li spoke passionately about the role of infrastructure in decision-making: “Often, human behavior depends on building design and the city’s infrastructure. I am interested in the infrastructural side of the story. In the long term, my dream is to see these two lines of research intersect so we can better understand the interactions between building environment, infrastructure, and human beings.”

“We still don’t have a good understanding of how people react during different types of emergencies and how buildings influence human behavior,” Becerik-Gerber said. “To understand that, and thus the building’s performance during an emergency, we recently ran virtual reality (VR) simulations of fires in a virtual train station, and collected data from Beijing, London, and Los Angeles. We are working on drawing their attention to the safest exit to minimize injury.”

Li speculated that the most challenging part of their work is yet to come, especially in the implementation phase.

“We just kicked off a three-year project with Beijing’s Earthquake Administration in which we will use the Tsinghua campus as a model to assess and improve its resilience, and then extend it to the entire city,” Li said.

Li noted that in the city plans for 2016-35, Beijing and Shanghai have included “becoming a resilient city” in their objectives. Said Li: “It’s interesting, because in practice the term of resilience is still quite new in China.”