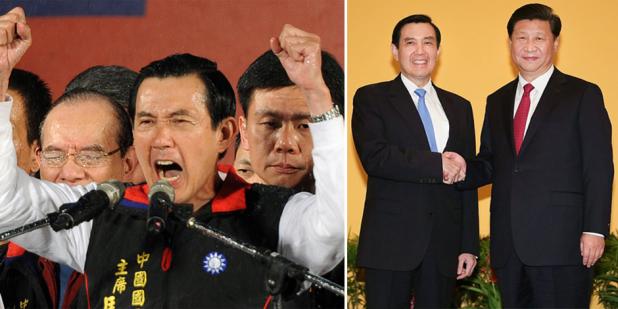 Ma Ying-jeou 馬英九, the former president of the Republic of China (Taiwan), is visiting Los Angeles and will give a public talk at noon today at the University of Southern California. The USC Center on Public Diplomacy is coordinating that talk. Later in the day, the USC U.S.-China Institute has organized a private discussion between Pres. Ma and USC students. On Tuesday, Nov. 7, he will address the Pacific Council on International Policy.

Ma Ying-jeou is the most successful Taiwanese politician of his generation. He was elected president in 2008 with 58% of the vote. He was reelected in 2012 with 52% of the vote. Prior to this, the New York University and Harvard-educated lawyer worked as an English interpreter for Pres. Chiang Ching-kuo, the last of Taiwan’s martial law presidents. Later Ma served as deputy chair and chair of the Kuomintang (Nationalist) party, as well as a member of the legislature (1991-1993), Minister of Justice (1993-1996) and Mayor of Taipei (1998-2006).

Ma’s triumph in 2008 largely stemmed from popular frustration over relatively weak economic growth. Ma assured voters that he believed in "three noes": no unification with the mainland without the consent of the people, no declaration of independence without such consent, and no use of force in cross-strait relations. Ma argued that stronger ties with China and more competent management would produce more rapid growth. During his administration, nearly two dozen cross-strait agreements were forged allowing for direct air flights, shipping, and greater cooperation in many sectors. The centerpiece of this effort was the 2010 Economic Cooperation Framework Agreement which lowered tariffs on many goods. Tourists from the mainland poured into Taiwan, increasing contact and stimulating segments of the economy. Mainland students began to enroll in Taiwan universities. Taiwan’s economy, largely because of strong links to the mainland, weathered the great financial crisis better than many places, but economic inequality grew, frustrating many, particularly younger Taiwanese. Ma’s promise of competent administration was challenged when the central government’s response to Typhoon Morakot in 2009 was considered slow and inadequate.

Among Ma's most important achievements was rebuilding ties with the United States. Washington appreciated Ma's outreach to China and his promise of "no surprises," of being predictable and reliable. U.S. Presidents George W. Bush and Barack Obama both authorized significant arms sales to Taiwan. During Ma's administration, most Taiwanese became eligible for visa-free travel to the U.S. While U.S. investment in Taiwan has grown slowly in recent years, trade has expanded, reaching $85 billion in 2016, up from $62 billion in 2008. The U.S. is Taiwan's second most important trading partner after China and ahead of Japan.

While a doctoral student in the U.S., Ma wrote on the Diaoyu/Senkaku islands, arguing that the islands belonged to the Republic of China. As president, he reasserted this claim arguing that the islands were claimed in Ming and Qing dynasty documents. Following World War II, the islands (along with Okinawa) were held in trusteeship by the U.S., Ma argued that in 1971, the U.S. told the Republic of China that while it would transfer administration of the Diaoyu/Senkaku islands to Japan, the U.S. was not taking a position on Japanese or Chinese sovereignty claims. During his administration, the Taiwanese government negotiated an agreement with Japan regarding fishing rights near the islands. In the last months of his presidency, Ma asserted Taiwan’s claims to territory in the South China Sea by flying to Taiwan’s military outpost on Taiping Island (Itu Aba) in the Spratly Islands. The Obama administration criticized the trip, labelling it “extremely unhelpful,” but Ma argued that “The US and we, when it comes to the big direction for the South China Sea are the same. We all hope for peace, hope there is no conflict or war.”

Ma sought to advance Taiwan’s external ties through a policy of flexible pragmatism. To get trade agreements with other countries, he argued, Taiwan first had to work around Beijing’s economic influence over potential partners by improving ties with the mainland. Ma felt that territorial disputes in the East China Sea and South China Sea could be best managed by focusing on practical issues such as joint resource management and developing codes of conduct. He put forward peace initiatives for both regions.

When he was reelected in 2012, Ma argued that his victory confirmed Taiwanese acceptance of the “1992 Consensus.” Ma explained it as both Beijing and Taipei agreeing that there was just one China, but that Beijing and Taipei held different interpretations what that meant. Ma argued that this consensus allowed the two governments to set aside the giant sovereignty question in order to work together to solve problems and foster greater cross-strait exchange. Opponents criticized the idea that a consensus actually existed and in 2014 popular opposition rose against the Ma government’s effort to secure a Cross-Strait Agreement on Trade in Services. Students occupied the Taiwan legislature for more than three weeks to protest the agreement. During this time, Ma noted that he was pleased young people were becoming involved in politics, but argued that such involvement must not violate the law or disturb public order. Many people supported the students with the largest show of support coming on March 30 with hundreds of thousands joining a demonstration in central Taipei. This "Sunflower Movement" protests caused the legislature to set the agreement aside. Ma, though, remained committed to strengthening cross-strait ties. In November 2015, he went to Singapore where he met with China’s top leader, Xi Jinping.

While the unprecedented Ma-Xi meeting itself was popular and absorbed television viewers (headlines celebrated the 81-second handshake), Ma’s personal popularity had slumped. This stemmed in large part from economic problems. Taiwanese society is aging rapidly and gdp growth never reached 2%/year during Ma's second term. Young people are particularly worried about diminished opportunities. Anxiety continues over environmental challenges, including worries over nuclear power in the aftermath of the 2011 Fukushima nuclear disaster in Japan. The most fundamental challenge for Ma, though, was the growing feeling among the people of Taiwan that they were Taiwanese first, distinct from the Chinese of the mainland. While Taiwanese want peaceful ties with China and value the opportunities of the enormous Chinese market, they are eager to protect the democracy they have built and the civil liberties they possess. Many are suspicious of agreements that call for greater cross-strait integration.

By the time of the 2016 election, Ma's Kuomintang party was in disarray, first choosing Hung Hsiu-chu as its presidential candidate and then dropping her in favor of Eric Chu. Ma’s 2012 opponent, Tsai Ing-wen, again represented the Democratic Progressive Party, focusing on Taiwanese worries about economic over-dependence on China and on expanding inequality. Tsai won with 56% of the vote, crushing Chu who won just 31% of the vote. Tsai’s DPP took 68 of the 108 legislative seats.

Ma is 67 and is making his third post-presidency visit to the U.S. While president, he made brief transit stopovers in the U.S., meeting informally with members of the Taiwanese community, local officials and scholars. He also used video links to speak directly to Americans. The USC U.S.-China Institute twice featured Pres. Ma’s remarks and his interaction with Americans and followed up with local discussions of Taiwanese politics, cross-strait ties, and U.S.-Taiwan affairs.

In our Freeman Foundation-funded teacher training program (part of the National Consortium for Teaching about Asia), the USC U.S.-China Institute routinely includes suggestions on how teachers could include Taiwan's history and culture in their lessons. Teachers have been especially eager to incorporate information about Taiwan's economic development and democratization in their courses. In 2010, 2012 and 2015, USCI took teachers on study tours that included visits to China and Taiwan. Taiwan Ministry of Foreign Affairs support helped make those trips possible.

The Thaw - documentary on cross-strait relations: part 1 and part 2