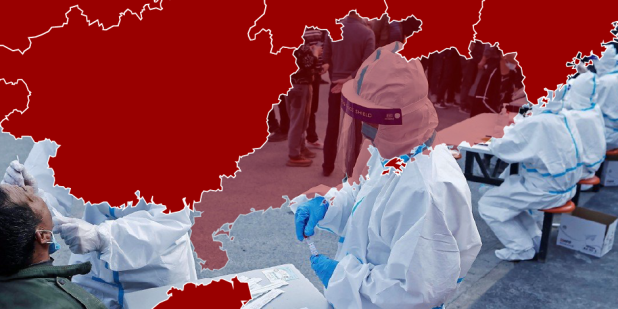 COVID-19 has infected more than 464 million people and taken more than 6 million lives in just over two years. In some places, effective vaccines and treatments have reduced how lethal the disease can be and other measures have slowed its transmission. But the virus mutates and moves. Cases have been surging in Vietnam, with an average of more than 254,000 new cases each day for the past week. Yesterday, South Korea recorded over 621,000 new cases and 429 deaths. Chinese officials have paid close attention to these trends among its neighbors and in its Hong Kong Special Administrative Region. Two weeks ago, Hong Kong had over 44,000 new cases a day. For the past week, the city of 7.5 million has averaged 250 deaths per day.

Determined to avoid a similar outbreak, China’s government has acted to ramp up testing and to restrict the movement of people when a relative handful of cases are found. Its ZERO COVID policy has kept its fragile health care system functioning and its factories and ports running. Americans and others have sought and bought from China at a record pace.

China’s ferocious, if belated, focus on the virus has come at great cost to individuals, families, companies and communities. The pandemic began in China in late 2019 (1 | 2) and hit Wuhan and neighboring areas hard. Hospitals were overwhelmed (1 | 2) and many died before they could get medical care. Two years ago at this time hundreds of millions of people were confined to their homes as the government struggled to mobilize health care personnel and erect care facilities.

Tightly managing the flow of people in and out of the country, even for the Beijing Winter Olympics, and vaccinating 85% of the population has meant that infections have been relatively few and were contained. Learning, work and normal family life were interrupted for many. More than 4 million Chinese companies failed in 2021. The highly contagious omicron variant, however, has penetrated those defenses and there are outbreaks across China. The protection offered by the vaccines employed in China may be less effective than others.

And so officials are locking down communities and even complete cities. Our map below shows earlier and current city lockdowns. Key manufacturing centers in Guangdong province near Hong Kong have been closed. Foxconn, the famed supplier for Apple and other companies, garnered headlines by creating a closed loop where tested employees go between factories, dining halls and dormitories. 2,500 kilometers (1,600 miles) to the north, Jilin and Changchun have been locked down and hazmat-outfitted crews have been using drones and sprayers to spread disinfectant. CNN reported on tough conditions and nervous students at one school. A social media post, purportedly from a student, detailing their woes was widely circulated, receiving nearly 3 million likes.

Shanghai has not been locked down, but international flights to the city are being diverted to other cities and those going into or out of the city are required to be tested. Elementary and secondary schools went to online classes last week and many companies shifted to working from home. There are reports of apartment blocks being converted to quarantine centers.

Two years ago some in China mitigated the uncertainty and strain of lockdown by swing dancing. #workfromhomewithchildcare 居家办公带娃 took off as a humorous way for middle class women to note how they carried more than their share of family duties. In COVID-19’s third year, creativity and complaints may go in other directions. The restrictions are familiar. Better off folks have screens and delivery meals. Poorer people suffer the most. At least the current lockdowns are likely to be shorter than those in 2020.