Locke: American Jobs and Profits tied to Trade with China and the rest of Asia 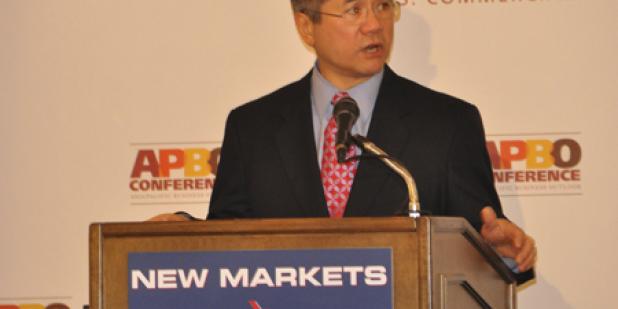 By Andrew McIntyre and Malia Makowicki

LOS ANGELES — Gary Locke, United States Secretary of Commerce and President Obama’s nominee to be the next U.S. Ambassador to China, spoke Tuesday about the need for America to offer continued assistance to small and medium size businesses, increase its exports and develop a green energy plan.

Locke’s comments came as part of a keynote address to the 2011 Asia Pacific Business Outlook conference, sponsored by the University of Southern California’s Center for International Business Education and Research and the U.S. Commercial Service.

Tuesday was the second stop of the U.S. Department of Commerce’s “New Markets New Jobs” tour, which visits a different city each month over the coming years.  The tour kicked off in Minneapolis last month.

“We want to help small and medium size American businesses sell more of their goods and services all around the world so they can create more jobs here at home in America,” Locke said.

The tour aims to incentivize investment in America and equip small and medium size businesses with the tools necessary to compete in the global economy.

“Small to medium size businesses are absolutely critical for expanding trade with Asia, and indeed all around the world. There is so much more that we can do,” said Locke. “Your Made in the USA goods and services are highly desired and in great demand all around the world,” Locke added.

Los Angeles Mayor Antonio Villaraigosa, on hand to introduce the Secretary, stressed that the future of America is here in Los Angeles.

“This is the city that looks east, not west,” said Villaraigosa. Los Angeles—where over 200 languages are spoken and 37 nationalities have their largest populations outside of their home country—needs to capitalize on its global position, according to Villaraigosa.

Indeed, increasing U.S. exports has been one of President Obama’s main initiatives during his first two years in office. His National Export Initiative aims to double U.S. exports by 2015, and according to Locke, the United States is on track to meet that goal.

United States exports—specifically those to China and the Pacific Rim—have been responsible in large part for the recent economic recovery, according to Locke. Exports to China are at an all-time high—up 32 percent from a year ago—and Locke expects continued increases in exports to result in nearly 10 million new jobs in America.

“I think one of the areas he could have improved upon, one of the areas in which the Department of Commerce needs to focus on, is the exporting of services,” said Jonathan Galaviz, Chief Economist of Galaviz & Company. “The majority of economy is a service-based economy and the United States’ competitive advantages are really in the areas of high value intellectual services,” added Galaviz.

Still, many praised Locke’s expertise and noted how well respected the Secretary is.

“He has the respect of the Chinese government …and tremendous respect in the business community, which is going to add value to him as an ambassador,” said Jeremy Potash, Executive Director of the California-Asia Business Council.

Although Locke awaits confirmation by the U.S. Senate, he mentioned some of the challenges the U.S. Ambassador to China will face, including issues of intellectual property rights, level playing fields and China and its WTO agreements.

And another challenge the United States faces is the challenge of becoming less dependent on fossil fuels.

“We’ve got to diversify our portfolio.  We’ve got to move forward on clean energy,” said Locke.

Locke warned that other nations—including China—have national-level alternative energy plans, while the United States does not.

“China is spending 9-10 billion a month on a clean energy sector.  They want to be the world supplier of green energy technology because they know that with that come millions of jobs,” said Locke.

Alex Wu, founder and CEO of GreenTree Inns, a hotel chain in China, agrees that China’s green technology initiatives far surpass those of the United States.

“I don't think there is a tactic or strategy that we have as to how to compete with China's government initiatives for green energy. China has a lot more proactive and massive programs,” said Wu.

Locke agrees. “We just need to have a policy.  So many American companies are sitting on the sidelines not willing to invest… At the same time, China is racing ahead.”