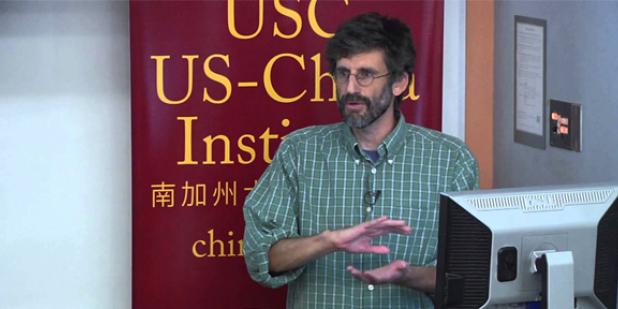 One of the USC U.S. – China Institute’s principal missions is to support cutting-edge research that illuminates the – relationship and the immense changes underway in that may affect that relationship. Toward that end, USCI has made four grants ranging in size from $4,000 to $15,000 to USC faculty researchers for work to be carried out this spring and summer. These projects were selected from among fourteen proposals submitted by faculty teams or individual faculty members. As an indicator of the immense cross-campus research interest in , these fourteen proposals came from eight different schools. Four schools were represented among the funded projects. The application guidelines are available here.

The Role of Civic Engagement in Securing Property Rights: A Comparison of the US and China

After tremendous internal debate, China’s National People’s Congress voted earlier this month to amend the nation’s property laws. These changes were first proposed more than a decade ago and the original bill was brought to National People’s Congress in 2002. Professors Cooper, Crigler, and Deng head a team of researchers investigating the role played by home owner associations in asserting and protecting property rights. They and others from USC’s Civic Engagement Initiative are working with Chinese scholars including Chen Youhong and Mao Shoulong of People’s University. These scholars and others will participate in a Beijing conference in June to lay out a collaborative research agenda for the next five years.

This collaboration of USC and Chinese researchers is investigating how economic changes and tensions are affecting China’s political discourse and structure, looking at the functions performed by homeowner associations and how institutional norms affect strategies and practices.

Professor Goldstein has been assessing scrap collecting and recycling for a couple of years and is now focusing on its international dimensions, including the enormous shipment of recyclable waste from the U.S. to China. The grant will fund summer fieldwork in China. The following is from his project abstract. “In 2005 the Beijing scrap scavenging and recycling sector processed approximately 1.5 million tons of post-consumer materials, generating US $270 million in profits and employing nearly 300,000 rural migrant laborers.  On a national scale, scrap scavenging and recycling in the China accounts for several million jobs and several billion dollars in profits annually.  Yet this huge sector has gone largely neglected by social scientists, both Chinese and foreign…”

“China’s recycling sector is more than merely a municipal or domestic concern; recyclable scrap now plays a major role in China’s international trade.  If paper, plastic and metals are aggregated together, then in 2004 the U.S.’s largest export to China was recyclable scrap, amounting to over US $3.1 billion. The scrap industry has also arisen as a fairly sensitive area in U.S.-China trade relations; in the last few years controversies over the U.S.’s export of toxic electronic waste as well as several accusations of unfair trade practices in the steel and paper industries all intersect in this burgeoning new sphere, the global scrap trade.”

Documenting the Global City, Enhancing Cultural Understanding Between China and the USA

Projects such as this one explain why Mark Harris recently received the honor of being designated a “University Professor.” He pairs USC documentary students with students at the Communication University of China and has them collaborate in producing short bilingual documentaries on “the global city.” In summer 2006, students working in Los Angeles produced six documentaries. Another team documented the pairs at work. These films were screened at both universities and have been broadcast on the Documentary Channel in the US and CCTV in China. In summer 2007, the collaboration moves to Beijing where USC-CUC student teams will produce short films about Beijing as a global city.

The films produced by this project will also be used in an interactive installation which will be exhibited in public venues in Beijing during the 2008 Olympics. USC’s Marsha Kinder heads the Labryinth Project which will produce the installation. As the project abstract notes, “Labyrinth will produce an interactive database documentary that addresses relations between Los Angeles and Beijing.”

Thanks to lengthening life expectancy and the impact of family planning initiatives, China’s population is aging and families are shrinking. While about 10% of China’s 1.3 billion people are currently over age 60, many expect the proportion to double within twenty years. Meeting the medical, financial, and other needs of that population is an enormous challenge. Professors Silverstein, Chi, and others at USC have been working on these questions. This grant funds continued collaboration with scholars from Peking University, Renmin University, Xi’an Jiaotong University, and the China Research Center on Aging and will provide for preparatory work on a fall USC conference. The project aims (in the words of the abstract) “to (1) strengthen on-going cross-school research at USC on the topic of population aging in China, (2) widen collaborative efforts with Chinese colleagues in the field of aging who are eager to strengthen their ties to USC, (3) provide graduate students with an intellectual and training infrastructure within which they can better develop their dissertation research on aging in China, and (4) sponsor a conference at USC that will bring together scholars from China and the U.S. to address issues pertaining to population aging in China, with the intention of producing an edited volume from the proceedings.” As Silverstein and Chi note, understanding this massive demographic shift and addressing its impact is not only a pressing issue for China, but a global concern.

USCI will also fund 2007-2008 faculty research projects. The application period for those grants has just closed. Twenty-one faculty or faculty teams from nine USC schools have applied. These grants (of up to $15,000) will be awarded in late April. In addition twenty-eight graduate students from ten schools have applied for summer fieldwork grants to support pre-dissertation or dissertation research in China. These grants (of up to $4,000) will be announced in mid-April.