Completing its executive global program, a multinational group convenes for commencement ceremonies on the USC Marshall site in China. 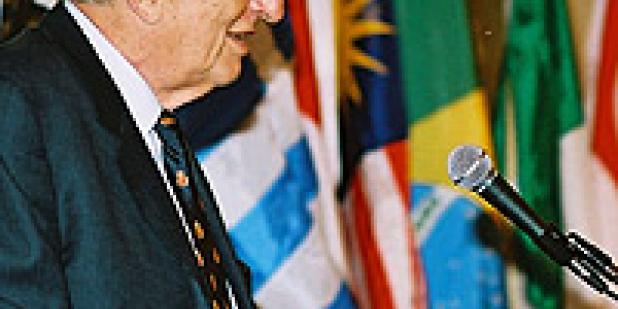 By Dagmar King
This article was originally published by USC News.

It was no ordinary commencement for a group of 45 students who traveled from China and eight other countries to receive MBA degrees from the USC Marshall School of Business.

The Jan. 27 graduation ceremonies, attended by more than 100 friends and family members, marked the completion of a pioneering executive global MBA program, or GEMBA, offered by USC Marshall in collaboration with the Antai School of Management at Jiao Tong University in Shanghai.

The students, who ranged in age from 30 to 53, represented a microcosm of the new global economy, hailing from Canada, China, Germany, Hong Kong, Japan, Singapore, Taiwan, the United Kingdom and even the U.S.

All of the students speak two languages, and many are fluent in three or more. Eight of the GEMBA students previously had earned degrees from USC. About half the class flies in for the program, which meets every six weeks for five class days over long weekends. Two faculty from USC fly to teach in each session.

Many students work for multinational companies. Some are from family businesses, while others lead their own entrepreneurial firms.

Rosemarie Gong helped open the first McDonald’s restaurant in China 15 years ago. Matthew Cooper, an American who works as a consultant in Shanghai, also has a reputation as one of the best blues guitarists in China.

USC Marshall enrolled its first students in its GEMBA program in May 2004; this first crop of graduates will be known as “GEMBA 1.”

The Shanghai program was created for managers seeking a “U.S. style” MBA education, as well as servicing USC’s large alumni base in Asia. It also exposes the university’s Los Angeles-based faculty to a broader international education and plants the USC flag in a new, high-growth market.

“This is a momentous occasion,” said Larry Greiner, the academic director of GEMBA and a professor of management and organization at USC Marshall. “Just a few years ago we only dreamed of such a program, and now it is flourishing, thanks to these 45 trailblazers.”.

“Science and business are closely linked,” Olah said. “It is as important to create a viable product as it is to properly develop a sound economic and marketing strategy for it. That is why scientists and business people must work together to solve our energy problems.”

Olah, who received the Nobel Prize in chemistry in 1994, is now working on developing alternative energy sources.

Degrees were presented by Lu Wei, associate dean of the Antai School of Management and a former visiting professor at USC Marshall, and by former USC Marshall Dean Yash Gupta.