Xiang-Rong Wang donated 100,000 isolation masks to USC health care workers. He was motivated to give to Keck Medicine because his daughter, Sofie Wang, is a freshman at USC. 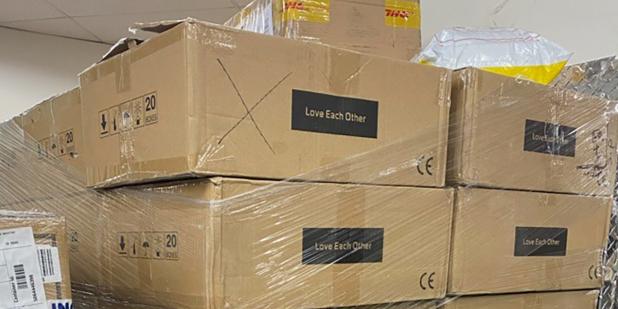 When Xiang-Rong Wang founded a water pump manufacturing company 25 years ago in Zhejiang, China, he named it Leo Group Pump. “LEO” stood for “love each other” and reflected Wang’s desire to give back to the community.

This philosophy took on significance for Keck Medicine of USC this week as Wang donated 100,000 isolation masks to health care workers.

“We are so grateful for the generosity of this Trojan family,” said Keck Medicine CEO Tom Jackiewicz, MPH. “This donation makes a significant difference in further ensuring the safety of our frontline workers.”

In March, due to the coronavirus pandemic, Wang began using part of his factory to produce medical face masks, which he has donated to charities and hospitals around the globe. He was motivated to give to Keck Medicine because his daughter, Sofie Wang, is a freshman at USC.

“USC is everything I ever dreamed of,” says the student, a business administration major with an emphasis in cinematic arts at the USC Marshall School of Business. “When my parents visited me earlier in the year and saw how happy I was, and then later learned that USC has a medical center, they knew they wanted to give back, and in a big way.”

A young woman beams at a star-shaped seal bearing the letters USC.

Sofie Wang reached out first to USC, then Keck Medicine’s supply team and together they made the gift happen.

So far, four of five shipments of masks have arrived. They are being used by staff, physicians and others at Keck Hospital of USC and neighboring care locations.

Currently Sofie Wang is living in an apartment near the University Park Campus, unable to return home to Shanghai due to the coronavirus. While she misses her family, she is buoyed by the fact that she is making a difference.

“Donating the masks was a collaborative effort involving my family, my family’s company and USC,” she said. “Even though we are separated by thousands of miles, we are still connected and working toward the same goal of supporting the medical staff.”

Hoping to one day produce television or movies, Sofie Wang believes this experience will also inform her career path.

“In any film I make, I hope to show the impact people can have on their communities and that we are all united,” she said.

USC Annenberg Professor Nick Cull looks at the impact of the Covid 19 crisis on the battle of images between the United States and China.

Gary Rieschel, founder of Qiming Venture Partners, takes a look at how innovative China has been and how the US-China rivalry may spur or stifle innovation.

City on Fire: The Fight for Hong Kong

Please join the USC U.S.-China Institute for a discussion with Hong Kong based author and photographer Antony Dapiran for a look at his new book on the city's protests and what they mean for the future of Hong Kong and China.

The China Initiative: The Department of Justice's Use of Criminal Law to Counter a "China" Threat

Please join the USC U.S.-China Institute for an online discussion with Professor Margaret Lewis on how the US government's use of criminal prosecutions to address a broad "China" threat is at tension with the criminal justice system.