USC scholar Bettine Birge receives a Mellon Fellowship to support her study of how the Mongolian conquest changed the rights of Chinese women. 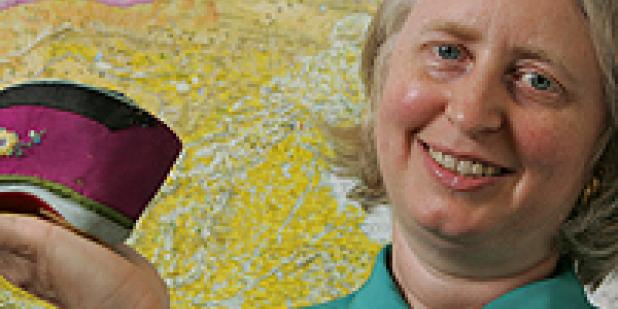 By Pamela J. Johnson
This article was originally published in USC Chronicle on July 5, 2006.
Photo by Philip Channing: Prof. Birge holds a shoe worn by a woman whose feet had been bound.

Bettine Birge was in the ninth grade when her grandmother asked if any of the grandchildren could accompany her on a trip to Asia.

None of the older grandchildren could make it. Bettine, a math whiz who had never traveled, eagerly volunteered. That long-ago sojourn through Japan, Hong Kong, Taiwan and Singapore profoundly impressed the youth, now an associate professor of East Asian languages and cultures and history at USC College.

Birge wrote Women, Property and Confucian Reaction in Sung and Yüan China (960-1368) (Cambridge University Press, 2002), and has shed new light on the alarming treatment of women in China – and how foreign rule became the catalyst.

For the next two years, Birge will step up her research by mastering the Mongolian language and following the route of the Genghis Khan conquest, studying archaeological excavations along the way.

USC has been given an Andrew W. Mellon Foundation New Directions Fellowship, a $208,000 award that will help Birge to further dispel myths in the communist state, where the trafficking and sale of women as brides or into prostitution, and female infanticide are commonplace, according to Birge.

“[My research] puts a different perspective on prevailing belief systems regarding women,” Birge said inside her office, examining a decorated, tiny silk shoe once worn by a Chinese woman during the agonizing, now-banned tradition of foot binding.

“Many practices are not Chinese traditions, as professed to be,” she said. “So it’s no longer a valid argument for maintaining such inequality.”

A USC College scholar since 1990, Birge’s research centers on the Mongol invasion of China in the 13th century. Western and Chinese scholars have long believed that the Mongol conquest had no lasting effect on Chinese culture or social structure.

Specifically, the Mongol occupation drastically transformed China’s marriage and property laws pertaining to women. Prior to the Mongol-Yüan dynasty, women’s rights had been improving, Birge said, moving away from Confucian ideals.

But women’s financial and personal autonomy was dramatically altered during the Mongol rule. Power was shifted from the woman and her family to her husband’s family. Among other inequities, this power shift paved the way for the practice of widow chastity in late imperial China.

“The emergence of the cult of widow chastity, thought to represent traditional Chinese Confucian values,” Birge said, “actually owed much to the foreign occupation.”

Social attitudes toward women deteriorated and extended into later dynasties, she said.

“In the 13th and early 14th centuries, issues of marriage, incest, property control, personal autonomy, control of reproduction and rights of widows entered a contested sphere of conflicting values,” Birge said. “[These conflicts are] seen in legal challenges and court battles leading to long-term changes in the law.”

As a result of the fellowship, Birge will expand her expertise beyond traditional Sinology. Birge, who speaks and writes fluent Chinese, Japanese and French and commands good German, will study the Mongolian language, classical and modern. She also will be trained in visual culture and archaeology. She leaves for Ulaan Bataar, Mongolia, in July.

“With additional training, I’ll be in a position to include visual materials in my analysis,” Birge said. “And I’ll be able to incorporate fully into my research the new perspectives archaeology offers.”

She has two new books in the works. One addresses gender, ethnicity and status under the Mongol rule, as seen in the legal arena. The other will explore the wider social implications of the legal cases, incorporating analyses of textual and visual materials.

Birge’s husband and their 8-year-old son, Henry, will meet her in Mongolia this summer. Henry, whom Birge affectionately has nicknamed Adventure Boy, is no stranger to exotic trips. When he was five, he journeyed through the back roads of Western China by bus with his mother and her colleagues.

The dirt roads were so rugged and bumpy that the bus shook violently during the 16-hour daily rides across country.

“It was an extremely grueling trip,” Birge recalled. “Henry was the only one who didn’t get sick.”