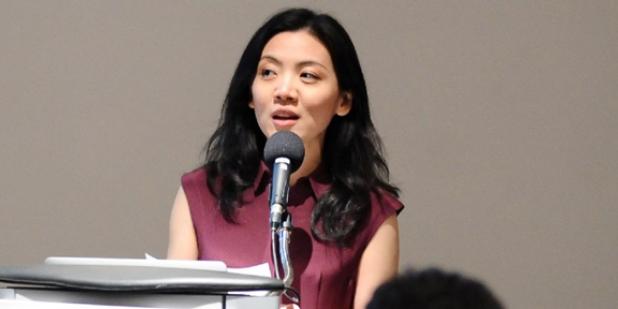 Originally published by USC News on June 5, 2014 by Eddie North-Hager.

Yu joins USC PAM from the Los Angeles County Museum of Art, where she served as assistant curator of Chinese art.  At LACMA she was instrumental in forming collaborations with the museum’s education department on all educational and outreach programs related to Chinese art and culture.

She also was responsible for the installation and rotation of LACMA’s Chinese art galleries and co-curated the exhibition “Chinese Paintings From Japanese Collections,” which opened in May and will remain on display through July 6. This is the first major exhibition in the United States to examine the story of Chinese paintings in Japan over the course of 600 years. It features nearly 40 masterpieces.

Yu is also the co-founder of Pacific Connections, which supports contemporary Asian art in Southern California.

A vision for growth

“Christina was selected from a highly talented pool of candidates to lead the USC Pacific Asia Museum,” said Elizabeth Garrett, provost and senior vice president for academic affairs. “Her experience in researching and curating Asian art at prestigious institutions is coupled with her ambitious vision for expanding the museum’s influence among our university, local and global communities. She is the right leader to ensure that USC PAM reaches new heights as part of USC Arts.”

Previously, Yu held positions with the Boston Museum of Fine Arts and Museum of Modern Art. She also was on the curatorial team at the Yokohama Museum of Art in Japan and the International Center of Photography in New York.

Yu was born and raised in China, went to Wellesley College for her undergraduate studies and then earned a PhD from the University of Chicago with a dissertation on Yuan Dynasty painting. She is fluent in Chinese, Japanese and English.

Her research interests include traditional Chinese painting and calligraphy, China’s contacts with border lands and contemporary Asian art. Her scholarship on Chinese art has appeared in journals and exhibition catalogues, and she has lectured widely at museums and universities.

USC PAM, founded in 1971, is located in a 1924 Chinese Qing Dynasty-inspired mansion in downtown Pasadena and has a collection of more than 17,000 items from across Asia and the Pacific Islands, spanning more than 5,000 years.

In November 2013, the museum and the university announced an affiliation to preserve its current location as an art museum, enhance the scholarship of the creative faculty and students at USC and provide a foundation for a museum studies and curatorial training program at USC.

Yu will be able to tap USC’s strengths in the arts, which include more than 6,000 students pursuing arts-related degrees. A significant number of these students come from Asia. USC also has a number of institutes that focus on the historic, cultural and social dynamics of the Pacific Rim and the Asian-American experience, including the East Asian Studies Center, the Korean Studies Institute, the USC U.S.-China Institute and the USC Shinso Ito Center for Japanese Religions and Culture.

Yu will begin her new role at USC PAM on Aug. 1.