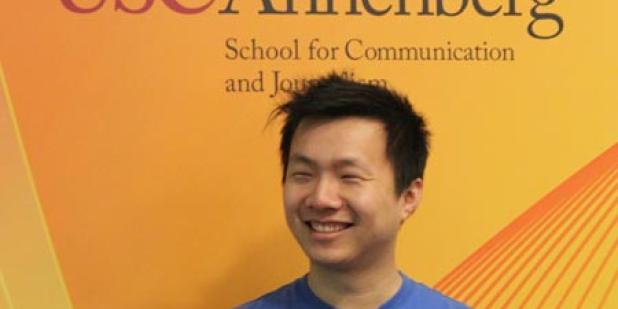 Originally published by USC Annenberg News on May 24, 2012

As a kid in Shanghai, Jenova Chen (pictured, above) bartered with his parents for the chance to play video games. He studied computer programming to please his father, but poured his leftover energy into playing hours and hours of games, copied onto floppy disks that he traded with friends. With his parents tightly restricting any outlet other than studies – including novels and TV – Chen thrived on the emotional rush he got from playing games like The Legend of Sword and Fairy.

As he got older, his friends started to outgrow video games. Chen realized what was missing: a mature, emotional connection to the entertainment. Something more than guns, swords and avatars with aggressive names like “Hairy Knuckles” and “I Killed Your Dad.”

Chen, who went on to become an award-winning game developer who changed the landscape of adult Internet gaming, told his inspiring story at USC Annenberg’s 10th Chinese Internet Research Conference this week. He was joined at the conference by Ge Wang, founder of SMULE and creator of groundbreaking iPhone and iPad music apps, and Ting Chen, chairman of the Wikimedia Foundation, which supports and oversees Wikipedia.

They spoke to a diverse group of students, business and entertainment professionals, game developers, academics and technology leaders. They and other speakers probed a wide range of issues, including: the rising influence of microblogs, the explosive growth and development of online games, the mechanics and politics of Internet controls and Beijing’s use of online mapping services and digital athletes as a way to extend its global impact.

China now has the largest Internet population of any country. More than 500 million people – 60 percent more than the entire population of the United States – are on the Internet in China. Since its inception in at USC Annenberg in 2003, the conference has investigated the phenomena that are altering and being altered by China. Those include all aspects of the Internet: online gaming, microblogging, search engines, e-commerce, content regulation, Internet governance and international domain names.  This week’s gathering also explored how social media is breaking down barriers of distance and social station, as well as the continuing party-state use of these tools to achieve its own goals.

“People want to know what’s going on within China regarding the Internet,” said Clay Dube, head of the USC US-China Institute. “How are Internet developments affecting the social, political and economic landscape? And how is China, with its mammoth online population, affecting the Internet for everyone – in terms of governance, economic choices and censorship? Those are the topics we’re exploring here.”

The three keynote speakers, all natives of China, demonstrate the breadth of talent impacting the Chinese Internet and how those users are transforming our understanding of collaborative knowledge, music and video games that evoke complex emotions, said journalism professor Mei Fong, who organized the conference.

“What really distinguished this conference is the keynote speakers: game developer Jenova Chen, i-Phone music app creator Ge Wang and Wikimedia Foundation chairman Ting Chen,” Fong said. “All three are China-born, Western educated and are forging new paths in the digital era, whether it be music or gaming or knowledge sharing. This is, I think, inspirational to young Chinese people who are being urged by their parents to stick to the "safe" technocrat jobs in technology.

“These three demonstrate that when you marry technology with creativity, the sky's the limit."

For Jenova Chen, the answer didn’t come right away. He made 12 games before he came up with the idea for “Cloud,” which was based on a young boy, confined to a hospital room, who dreams of escaping by flying. He developed the game as a student in the Interactive Media Program of the USC School of Cinematic Arts, and with the help of a $20,000 grant from USC. Within three weeks of its release in 2005, school servers had trouble keeping up with the demand for downloads.

Chen had never heard from a player before, but he started to receive emails. He had moved people. “One email I received said, ‘Tell everyone involved they're beautiful people.’ My entire life, no one had ever told me I was beautiful,” he joked.

But the sentiment told him he’d finally made the connection he’d been hoping for. “There was something in this project that set it apart. We tried to analyze what went right. It was a new continent for video games, and the continent was emotion.” Chen realized people can be hungry for feelings, and he set out to make games that could fulfill the appetite for emotions beyond those sparked solely by excitement, competition and violence.

After earning his master’s degree, Chen co-founded thatgamecompany in 2006 (he still serves as creative director) and began work on a game called “Flower,” that took two years and a dozen prototypes. The goal was to create something that was completely positive and uplifting – but challenging at the same time.

“We realized how difficult it was to make a game unlike anything that existed. It basically is like searching the fog,” Chen said.

The game was a success, and is even featured as part of the Smithsonian’s “Art of Video Games” exhibit.

Chen got the idea for his latest game, “Journey” after a conversation with Charles F. Bolden Jr., now the administrator of NASA and a former astronaut. Bolden recalled how astronauts’ spiritual selves changed after seeing Earth from space. They felt something that changed their lives – awe.

“The problem with today’s entertainment media is there’s not a lot of awe left,” Chen said. To feel awe, you have to feel small, he says, but existing video games were focused on empowering the user. “You are the center of power.”

The idea of Chen’s latest game, “Journey” is to strip the player of empowerment – no avatar names, no chatting, no weapons, no detailed mission – to evoke a sense of wonder and awe, as they try to navigate a wild and unmarked territory. Players are completely alone in a desert landscape until they stumble across other online players.

And their interaction turned out to be exactly what Chen was hoping for. Instead of competing, their natural instinct is to cooperate.

Since its release in March, it’s already Chen’s most universal game, with popularity spread across Japan, America and Europe, and he’s received more than 500 emails of support from players.

Chen hopes to make the future of video gaming and interactive design even more nuanced, like film, to evoke more emotion, he said. He sees the recent surge in simplistic online games, using basic programming and little art, as a step back. He called the trend “heartbreaking.”