The Dragons of Troy

From missionaries and technocrats to business moguls and government ministers, USC has a distinguished history of preparing China’s movers and shakers. 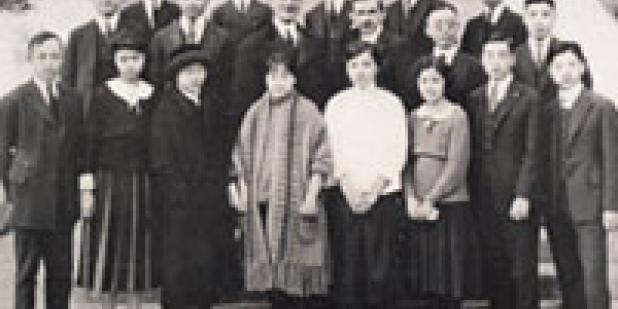 This article originally appeared in Trojan Family Magazine (winter 2006).USC’s ties to Asia run long and deep. Originally founded as a Methodist school, it was a natural magnet for missionaries-in-training – many of them bound for China. Indeed the founder of USC’s theology school – Robert S. Maclay (uncle of USC founding fathers Robert Maclay Widney and Joseph Pomeroy Widney) spent 25 years as a missionary in Fuzhou.

Two of the first “Chinese” students at USC were actually Americans: sisters Louise Evans Chapin and Abbie Goodrich Chapin were born and raised in China, the daughters of a missionary. After graduating in 1892, Abbie returned to her birthplace; records show she was still there 20 years later, working as a missionary in T’ungcho.

Almost from the start, USC has also enrolled a steady stream of Chinese students – not only immigrants but Chinese nationals who would carry their learning back to their homeland.

Early yearbooks bear witness to this. So do yellowed articles from the archives of the Los Angeles Times – and not always in a flattering light: a 1912 court report noted that Chin Man Kan, manager of the Quang Hing Lung Company and a USC law student, had pled guilty to charges of immigrant smuggling. There’s a more favorable mention, in 1914, of Chinese national Jane Owyang studying law here sponsored by her government; and a 1922 article notes Chinese minister of education Yuan Lien Fan’s six-week stay here to take USC courses in modern methods of agriculture and development.As early as 1911, university president George F. Bovard established a Department of Oriental Studies. A Chinese Students Club was formed in 1921, and USC began offering Chinese language instruction in 1923. In 1927, the Times reported that engineer Shubert M. Chee, a USC graduate, had traveled to New York “with the authority of the Peking government” to spearhead the installation of radio broadcasting equipment in China. Most distinguished, without a doubt, is Lei Jieqiong MA ’31 who, after completing her training in sociology, returned to her homeland to become a key architect of China’s social-service system (and an admired academic, political organizer and former vice mayor of Beijing).

Madame Lei, incidentally, is still alive. The 101-year-old Trojan was named “USC’s International Alumna of the 20th Century” by President Sample and a delegation of visiting trustees in Beijing last spring. Sample had met her on an earlier visit in 1995, when he presented her with a copy of “A Study of American-Born and American-Reared Chinese in Los Angeles,” her master’s thesis found in the archives of USC’s library.

There have been other standouts. A 1944 photo in USC’s archives shows graduate students Wen-Hui Chen and Theodore His-En Chen relaxing on a sunny Southern California day, far from the turmoil of the second Sino-Japanese War which had driven them from their homeland. The couple went on to earn PhDs in sociology and education, respectively. Teddy Chen became USC’s first Chinese professor, and a leading proponent of East Asian studies and education across the Pacific Rim.

After the Communist revolution, USC ties with the mainland withered, but connections in Hong Kong and Taiwan continued to flourish. With President Nixon’s historic reopening of relations, USC was the first American university to make overtures.

“I can remember in 1978 we started getting the first letters of inquiry from China,” recalls Margie Berti, an associate dean and longtime graduate recruiter at the USC Viterbi School of Engineering. “It looked like they had been opened and taped back up by many hands.”

After the Asian economic crash of the 1990s – which hurt not just Japan, Indonesia and Thailand, but also bloodied real estate investors in Taiwan, Hong Kong and Singapore – many American universities lost interest in Asia. But not USC.

“We continued to have a lot of ongoing programs and relationships with Chinese alumni,” says international development director Irma Quintana. “I remember going with business students to see how these people were pulling themselves up by the bootstraps.”

Such loyalty did not go unnoticed. “A lot of what we heard,” she recalls, “was that they appreciated that USC didn’t abandon them in the crisis. We kept sending students and recruiting students.”

So when Sample and a delegation of eight USC trustees visited Asia in 1995, they found the doors of government and industry wide open.

President Suharto of Indonesia gave them a 90-minute meeting. Tung Che-Wah, Hong Kong’s incoming leader after the British departure in 1997, was almost as generous. So were Japan’s former prime ministers Kiichi Miyazawa and Yasuhiro Nakasone and Malaysian prime minister Mahathir Mohamad. At the time, most of the secretaries general in Mahathir’s cabinet, his personal chief of staff, the mayor of Kuala Lumpur and the president of the University of Malay were all USC graduates.