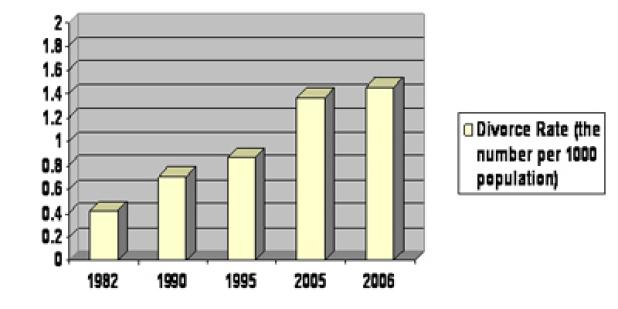 ON AN AVERAGE DAY IN CHINA 5,233 couples complete divorce proceedings. Two-thirds handle their divorces through the civil affairs offices of their local government. One-third divorce through the courts. The divorce level in China has been rapidly increasing since the 1980s.

This may have something to do with the 1981 New Marriage Law, which placed more emphasis on the emotional basis for a happy marriage and considerably eased the requirements for divorce. (Zeng and Wu). A similar phenomenon could also be seen in the 1950s, after the 1950 New Marriage Law came out. This law, called the “divorce law” by many rural men stressed that marriage was to be voluntary and permitted women and men to end their marriages at civil affairs offices. Some studies found that divorce rate was 1.99 per thousand in 1953, which was even much higher than the rate in 2006 (Zeng et al). Divorce in the United States is declining. It peaked at 5.3 per 1,000 people and is now 3.6 per 1,000 people. However, even though this figure is now at its lowest level since 1970, it is still nearly 2.5 times the China rate.
Sources:
Fox News, May 10 2007, <http://www.foxnews.com/story/0,2933,271322,00.html>.
PRC Ministry of Civil Affairs, May 23, 2007, <http://www.mca.gov.cn/news/content/recent/2007523122309.htm>.
Xinhua News Agency, May 24, 2007: <http://www.china.org.cn/english/features/cw/211746.htm>.
Zeng Yi, T. Paul Schultz, Wang Deming, and Gu Danan, Association of Divorce With Socio-Demographic Covariates in China, 1955-1985: Event History Analysis Based on Data Collected in Shanghai, Hebei, and Shaanxi,” Demographic Research 7.11 (August 2002): 407-432.
Zeng Yi and Wu Deqing, “Regional Analysis of Divorce in China since 1980,” Demography 37.2 (May, 2000): 215-219.
Xiao Wei did her undergraduate work at Renmin University of China in Beijing, China, and received her Bachelor of Arts in philosophy in 2003. She is presently a third year Ph.D student in philosophy while also working on her master's degree in Communication Management in the Annenberg School for Communication at USC.