Chinese take to the air

Before the pandemic, increasingly affluent Chinese were flying all over their country and the world. American aerospace companies have benefited as China's airlines have grown in size and reach. But a new Chinese competitor to the established manufacturers is entering the arena.
March 24, 2022
Print 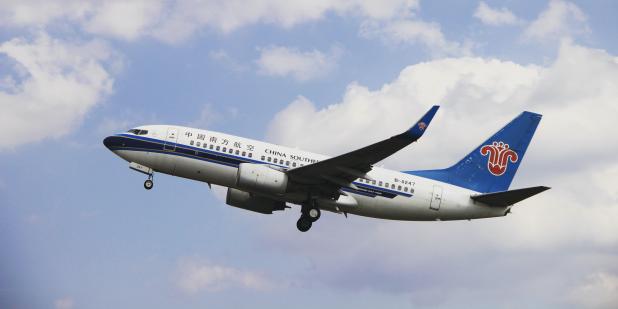 China Southern is the nation's largest airline. Like China Eastern and many other carriers, it makes heavy use of the Boeing 737-800.
Subscribe to our weekly newsletter to get it delivered straight to your inbox!

On Monday, 132 passengers and crew perished in the crash of China Eastern flight 5735 from Kunming to Guangzhou. Worldwide, air travel has picked up significantly, but it is still 41% below 2019 levels. Passenger traffic in China had been coming back despite the constraints posed by covid-19 lockdowns. China Eastern, the nation’s second largest airline group, serves more destinations than any other. Kunming is its third busiest hub after Shanghai’s two airports.

China Eastern changed the colors of its website to those of mourning.

The charts below show how China’s air travel industry has expanded, especially over the past two decades, rising from 90 million passenger trips in 2004 to 671 million in 2019. China has built and expanded airports at a furious pace. It is still building with plans to add 29 more airports to the 241 currently in service. Some of those projects don’t make economic sense, handling few flights or passengers, but many are bustling. Before the pandemic Chinese airlines were hustling to find pilots, including recruiting abroad. Airlines based in Xiamen and Qingdao, for example, offered senior pilots $40,000-50,000 more a year than big American carriers. When the pandemic hit, the number of flights dropped by more than half and foreign pilots were sent home on unpaid leave. Chinese pilots saw their wages cut as they flew less. The Ministry of Finance subsidized carriers converting passenger space to cargo space, a policy that was reversed in 2021 with carriers ordered to reinstall seats.

Most assume that the passion for travel among Chinese, including foreign travel, will return as restrictions are reduced. U.S. aerospace manufacturers have benefited from sales to China. Boeing delivered its first plane to the People’s Republic in 1973. In 2018, as the trade war began, Boeing delivered a record 192 planes to China, about a fourth of the jets the company produced that year. Boeing made almost $14 billion in China in 2018.

Crashes of Boeing’s 737 Max in late 2018 and early 2019, however, led to the plane’s worldwide grounding. As it focused on fixing the problems with the jet, deliveries in China collapsed. In 2019, the company delivered just 45 planes. With the pandemic hampering production and crushing demand, Boeing delivered just 6 jets to China in 2020. In December 2021, China’s aviation regulator indicated it would eventually recertify the 737 Max for use in China. Chinese airlines have 143 Boeing jets on order. It was one of Boeing’s workhorse jets, the single-aisle 737-800 that crashed this week, the first major accident for a Chinese airline in almost a decade. It isn’t yet known what caused the disaster.

Last year, Boeing estimated that China would require 8,700 new passenger jets over the next two decades, most of them of the single-aisle variety. This would more than double the number of currently in service. At present Boeing and Airbus are the main producers of such jets. But China’s leaders have long admired this expertise. Deng Xiaoping visited Boeing in 1979 and Xi Jinping went there in 2015. During Xi’s visit Chinese companies agreed to purchase or lease 300 Boeing planes, including 250 737s. Boeing also agreed to set up a 737 “completion” center in China, to finish interiors and paint the planes. Chinese firms were already producing components for Boeing jets.

Eager for the economic gains and technological advantages available to those able to produce such sophisticated and reliable planes, China has invested heavily in developing its aerospace sector and set goals for the industry in its Made in China 2025 plan. It launched development of its own single-aisle workhorse plane, the C919 in 2008. The first flight of the jet was in 2017. It still needs to earn a number of certifications before it can go into commercial service. Demand for such jets, especially in China, is high and the state-owned company that produces it should have steady revenues. Foreign firms won’t completely lose out. The C919 uses engines produced by a General Electric and French joint venture and other systems from Honeywell and other American firms.