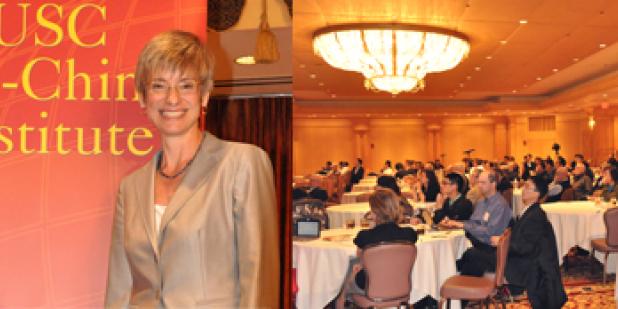 By Andrew McIntyre
An abridged version of this article was published by USC News.
Click here to see the conference program and video of the presentations.

What is happening in the Chinese economy and what this means for that nation and for the U.S. was the focus of USC U.S.-China Institute’s Feb. 25-26 The State of the Chinese Economy conference. Projections for China's gross domestic product, labor supply, currency, education, demographics, marriage, housing and healthcare dominated the two day’s discussions.

Featuring a closed-session keynote introduction by USC Provost Elizabeth Garrett and address by eminent journalist Hu Shuli, the conference came at a time when the majority of Americans believe China, not the United States, to be the world’s economic powerhouse.

Some economists, including speaker Carsten Holz of Hong Kong University of Science and Technology, argue that China’s economy is already as large as America’s. But all agree that if China can maintain its record-setting growth rates, its GDP will pass that of the U.S. within a decade. That is a big if, however, since speakers outlined many significant economic challenges.”

Much of China’s GDP growth over the past two years has, ironically, been an indirect result of the global economic downturn.

“The crisis was crucial because it gave policymakers the resources from all this money flowing through the banking system and encouraged their inclination to dramatically shift the development strategy,” said UCSD’s Barry Naughton, emphasizing China’s rapid recent investment in infrastructure and large state-owned enterprises.

And much of China’s recent development has been fueled by unprecedented mass rural to urban migration, a topic of discussion across both days.

“There’s a real crisis, and it starts in remote rural areas,” said Scott Rozelle of Stanford University. “Huge amounts of labor are moving into the city and fueling the workshop of the world,” added Rozelle. The challenge ahead for the Chinese labor force is whether it can become and stay competitive globally.

And while Rozelle stressed the need for China’s labor force to become and remain competitive, UCLA’s Cindy Fan suggested that the U.S. labor force will, in response, need to shift into a newer, more competitive gear.
While Fan admitted that “the rhetoric about China taking jobs from the U.S. is somewhat true,” she said that “if the labor force [in the U.S.] is competitive enough, jobs will come.”

Both nations are closely watching one another, particularly on currency valuations.

One of the major hurdles along China’s path to global competitiveness is the question of how to improve access to and quality of education in rural areas.

“Say you have 100 kids in poor rural schools, and two to four end up going to college. Seventy percent of urban students go to college. That’s a 35-1 gap,” said Rozelle.

And convincing Beijing to act promptly is no easy task. “Those that are in power now are serving five-year terms. The problem is you need to think about what the needs will be 20 years from now, and educate for that now,” said Rozelle. “If you’re still producing 10 million students a year who don’t have the skills to perform 20 years from now, that’s the problem,” he added.

While much of the conference focused on educating China’s youth, economists and political scientists also discussed the country’s older generation. “China is aging at a very rapid rate, and it has to cope with that,” said Dube.

And part of China’s challenge is providing ample financial support for its retirees. “The people who suffer the most are the elderly, who are on pensions and small government payments,” said Victor Shih of Northwestern University.

The official retirement age in China is 55 for women and 60 for men, but today “more and more people work in private enterprises,” said Fan. USC’s John Strauss joked that “by Chinese rules, I should have retired yesterday. Because this conference is so good, I have decided to delay my retirement until this afternoon.”

According to Zhang, for every six men in China, there are five available women, and one of Zhang’s recent surveys found that “80% of Shanghai mothers object to their daughters marrying men who don’t have a house.” This engenders the phenomenon of “mother-in-laws pushing up housing prices,” said Zhang; according to tradition, “groom families are supposed to offer a house,” Zhang added.

USC’s Brett Sheehan’s tale of two (Shanghai) women was consistent with Zhang’s findings. When Sheehan recently asked two Shanghai women about the city’s towering real estate prices, he found that they “were completely unconcerned. ‘It doesn’t affect us, because the boys who we will marry will buy the houses.’ They were completely unfazed, because they didn’t have to buy houses,” said Sheehan.

“It’s like Darwin’s peacock tails,” Zhang added. Indeed, many Chinese feel the pressure to construct houses more capacious than those of their neighbors. And “the problem may get worse,” warned Zhang.

However, the China housing bubble—astronomical cost-to-income ratios in numerous cities, including Hangzhou, Shanghai and Hong Kong—has of course been inflated by much more than simply mother-in-laws.
But what exactly has sent Chinese housing prices soaring through the roof?

National University of Singapore’s Deng Yongheng believes that China’s massive—and quickly implemented—stimulus contributed to much of the real estate bubble, but cautions that “we need to be more thoughtful” in our analysis. Deng believes we cannot simply use U.S. housing models to analyze the Chinese housing market.

While USC’s Baizhu Chen disagreed in part with Deng’s analysis, arguing that China’s huge population needs housing and that prices reflect natural demand, Naughton found Deng and others’ housing work to be extremely valuable. “These are really good data sets, big data sets. The quality of the work is really good,” said Naughton.

And while the lack of affordable housing is a major issue in China, the lack of healthcare—substantive and comprehensive, that is—also looms large. Strauss has done extensive healthcare research in Gansu and Zhejiang provinces.

“As of 2008, an overwhelming majority of people were covered by some sort of insurance,” said Strauss. The figure that year was about 90%, markedly different from where things stood five years ago.

Health insurance in China maxes out at about 40% coverage for bills exceeding 10,000 RMB (about $1,500). “This means there is no major medical insurance in these two provinces,” said Strauss.

Sheehan concurred. “Professor Strauss answered the question I had, which was, ‘is this real healthcare?’ No!” asserted Sheehan during a discussion of his USC colleague’s work.

“China achieved almost universal coverage in about six years, but policies are more like subsidies than real insurance,” said Strauss. “The healthcare system has not become properly geared towards chronic diseases of the elderly,” he added. “What do you do? You rely on your family,” Strauss said.

And the absence of “real healthcare” covering high-cost operations is only part of the problem. According to Rozelle’s research, if a simple nutrition pill were readily available and distributed in rural China, academic performance and overall health in these areas would drastically improve. This is critical, USC’s Guofu Tan suggested, if China is to strengthen its human resources for a time when labor will be in short supply.

Tan argued that the policy implications of the research presented on nutrition, health care and labor should be summarized for use by Chinese leaders. “I think the Chinese government should pay more attention,” said Tan.

Rozelle expressed optimism on getting such recommendations considered. “It’s a great time to be an economist. If you can show that something works and is cost effective, they [government officials] often act on it,” said Rozelle.

The conference attracted a large and diverse audience, consisting of journalists, businesspeople, trade officials, community leaders, students, scholars, and even a delegation of high school students from Harvard-Westlake School.

Video of the presentations is available at the USC US-China Institute website.

Andrew McIntyre is a graduate student at the USC Annenberg School for Communication & Journalism and an editor at US-China Today.