China, Ukraine and the United States

The Canadian embassy in Beijing has shared its support for Ukraine with Chinese via a sign on its wall and via Weibo. China and Ukraine have been building a significant economic relationship, one that has occasionally troubled the United States. Here we look at these ties in the context of Russia's invasion.
March 10, 2022
Print 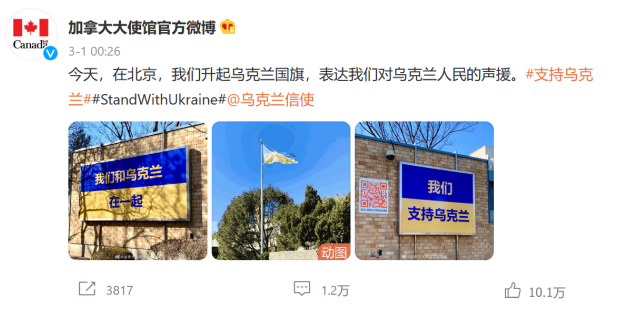 The war in Ukraine grinds on, taking lives, displacing millions and destroying cities and infrastructure. Many countries have rallied to Ukraine’s side, condemning Russia’s invasion and calling for Moscow to withdraw. China has not, asking Russia and Ukraine to resolve their differences through negotiation and criticizing sanctions imposed by the United States and others.

A month ago, in their “friendship and cooperation without limits” proclamation, Xi Jinping and Vladimir Putin argued against blocs of nations, unilateral sanctions and extraterritorial jurisdiction. Meeting and issuing the statement on February 4 was convenient. It allowed Putin to attend the opening of the Olympics, where punishment for systematic abuse of banned substances meant the Russian flag did not fly. And it allowed China to have a prominent leader defy a U.S.-initiated diplomatic boycott of the Beijing Games. China and Russia are both committed to not being subjected to standards set by others. China and India haven’t found it comfortable to be among the minority of countries that have abstained from condemning Russia’s invasion. But they so far see it necessary to protect their own perceived interests.

As it is for the United States and many other countries, China is Ukraine’s top trade partner. Two-way trade in 2019 amounted to $11.4 billion, nudging past Russia. From 2014 (when Russia seized Crimea and had proxies occupy parts of Eastern Ukraine) to 2019, exports to Russia from Ukraine fell 53%. Meanwhile, China ramped up both exports to and imports from Ukraine.

By value, China’s top exports to Ukraine in 2019 were semiconductors and phones (15% of the total). Ukraine’s top exports to China in 2019 were iron ore (33%) and corn (20%). More than two-thirds of the corn imported by China that year came from Ukraine. But even China pales in comparison to the European Union as a trade partner. The EU took in 37% of Ukraine’s 2020 exports and provided 42% of its imports.

With Chinese officials and businesspeople, Ukraine has talked up its potential as a bridge linking China and Europe. It has hosted its own Belt and Road Forum and in 2016 sent a test container train to China utilizing ferries across the Caspian and Black seas. In a 2020 interview Ukraine’s President Volodymyr Zelensky noted that interest in China was so high and job opportunities so promising that each year the country was graduating 500 students who could readily function in Chinese.

Chinese firms have signed agreements to build a number of projects in Ukraine. The most prominent is a new subway line in the capital Kyiv, but others include highways, port dredging and a waste incineration power station. Starting a decade ago, CITIC Construction has been talking with Ukrainian officials about a $15 billion/15 year effort to build affordable housing. Another firm is putting in $500 million to set up a wind farm. One of the earliest and most successful investments came from a Chinese state-owned agricultural company. It has developed corn farms, livestock operations and a forest hunting reserve.

Ukraine has a significant, if not always profitable, defense industry inherited from Soviet days. In 1998, it sold Chinese basketball player turned businessman Xu Zengping a partially-built aircraft carrier. It took Xu a year and a half to get it towed to China. Another decade would be needed before it was commissioned as the Liaoning, China’s first carrier. Ukraine also sold Soviet-designed fighter jets to China. But not all deals have ended well.

The U.S. and other countries have imposed numerous sanctions on Russia. Many companies have shut down operations there. China has not joined these sanctions, though U.S. Commerce Secretary Gina Raimondo has warned that Chinese companies, including semiconductor firms, using U.S. technology to manufacture products subsequently sent to Russia could be punished for violating export controls. Prior to this week’s prohibition against importing oil from Russia, the U.S. took 8% of the country’s oil exports. China, though, is a much bigger customer, taking in 32% of Russian exports in 2021. And it will continue to buy.

At the same time, last week the China-based Asian Infrastructure Investment Bank said it would freeze activities connected to Russia and Belarus. In the last two years, AIIB has financed railways in Russia and roads in Belarus. Last fall, AIIB announced its 2022 annual meeting would be held in Russia. China launched AIIB and has the largest voting share (27%), but here it is following the example of the World Bank which decided to halt programs in Russia and Belarus. The U.S. has the largest voting share in the World Bank. It has not extended new loans to Russia since its 2014 annexation of Crimea.

Ukraine has extensive people to people links with both the United States and China. Twenty-two American cities and twenty-three Chinese ones have sister city ties with Ukrainian towns or cities. Lowell and Beibei (Chongqing) are both linked to Berdyansk, Pittsburgh and Taiyuan to Donetsk, an industrial center and now capital of the Moscow-recognized Donetsk People’s Republic. Arlington County and Nanning are tied to Ivano-Frankivsk. Muscatine, best known to Chinese as the Iowa town where Xi Jinping stayed for a few days in 1985 and revisited in 2012, is sister city to Ukraine’s Drohobych. Cincinnati and Tianjin are linked to Kharkiv, Ukraine’s second largest city and the focus of sustained Russian attacks. Port city Odessa has ties with Baltimore and Qingdao. Uzhhorod is the sister city of Corvallis and Xinzhou. Ukraine’s capital, Kyiv, has ties with Beijing and Wuhan in China and Chicago in the U.S.

More than a million Americans have ancestral ties to Ukraine. But even more Canadians do. 1.4 million Canadians, about 4% of the population, identify as at least partly Ukrainian. Canada’s relationship with China has been testy for several years owing to the perception that China engaged in hostage diplomacy, detaining Canadian citizens in order to put pressure on Canada for detaining Huawei’s Meng Wanzhou. With the Russian invasion of Ukraine, the Canadian embassy made it clear where Canada stood, putting up “We support Ukraine” on signs on its external wall and using its Weibo account to further push out its message in China.