Building a Bridge to a Sustainable Future 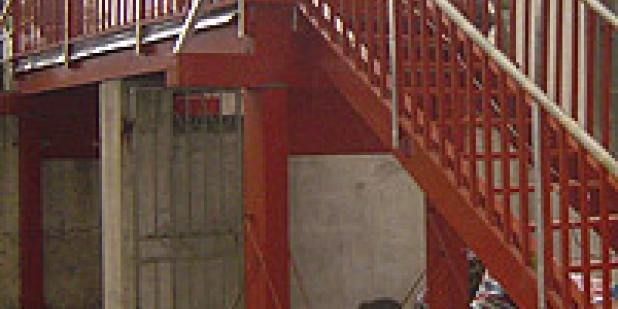 By Eric Mankin
Originally published on March 6, 2007 in USC News and Features.
Photo by Yan Xiao: Prototype of a bamboo footbridge in Changsha, Hunan Province, China.

A USC engineer who has created ply-bamboo and other new materials is organizing an international conference on emerging technology and its message for a world increasingly interested in sustainability.

Yan Xiao, an associate professor in the USC Viterbi School of Engineering, spent the last year in China’s Hunan province, creating new ways to use the ultra-tough, resilient grass as raw fodder for new composite materials.

Hunan and its capital Changsha is a major center of bamboo production.

Bamboo, one of the world’s oldest building materials, has been used in China and other locales for millennia, but it has not penetrated the industrialized construction market (though bamboo scaffolding is used in Asia in the construction of high-rise buildings).

Xiao, working with collaborators in Hunan, took on the challenge of creating materials that could be used in existing processes and designs for modern structures, such as bridges and buildings with a potential for strong, economical and environmentally-friendly structures of all kinds.

The new techniques and material came together in the construction of a footbridge, the world’s first of its kind, in Hunan.

All the main structural elements – including girder beams, columns and beams for stairways and railings – are made from laminated bamboo sheets. Steel and fiber-reinforced plastics are used for connectors at limited locations. The pavement was made with bamboo-reinforced, pre-cast concrete.

Xiao said the bridge would have cost twice as much with steel. In addition to the pedestrian bridge, Xiao and his team also built a portion of a laboratory addition with 20-meter high walls using a hybrid of steel, timber and bamboo.

With worldwide attention focused on sustainability, bamboo as a basic building material has immense potential, Xiao said. It can be grown on farms, reaching maturity in three years or less, which is much faster than trees. In addition, the structural qualities of bamboo as a material are superior to wood in many ways: Bamboo has higher strength, tenacity, tractability and is equivalent to or better in terms of physical performance.

Meanwhile, the use of bamboo in structures around the world is rising, particularly in Asia and South America. In the United States, several members of the American Bamboo Society are advocating the use of bamboo in buildings, as well as other natural materials, to promote sustainability in construction.

Xiao said that even a partial replacement of concrete or steel by natural or green materials such as bamboo could relieve pressure on limited resources and reverse some environmental degradation.

Bamboo, a domestic plant, is a totally renewable resource whose growth removes carbon dioxide from the air, Xiao pointed out.

The international conference on modern bamboo structures will be held Oct. 13-17 in Changsha. Besides USC, academic sponsors include Hunan University and Japan’s Oita University.