Durable, inexpensive structure can be assembled quickly, says the USC engineering professor who designed it. 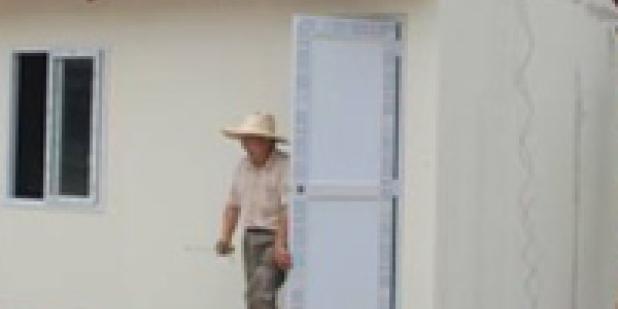 A USC professor on sabbatical in China has created a prototype of a sturdy, quick-to-build bamboo house designed to help the vast number of people made homeless by the May 12 Sichuan earthquake.

Yan Xiao, an expert in structural design and retrofit in the USC Viterbi School’s Sonny Astani Department of Civil and Environmental Engineering, has been experimenting with bamboo-based materials for highly demanding structural uses in China’s Hunan province and recently built the world’s first bamboo truck bridge there, in the city of Leiyang.

He went to nearby Sichuan province on May 13, the day after the earthquake, returned to the Chinese Ministry of Education Key Laboratory at Hunan University, where he has been serving as director, and immediately went to work on a housing solution.

The prototype bamboo quake relief house he built in less than two weeks adopted a modular design that can be adjusted according to specific family needs.

“The modular units are connected by bolts and are easy to manufacture and assemble,” Xiao said. “Four to six workers can assemble a 22.3 square meter (240 square foot) house in about four hours. The majority of the structural materials used are processed bamboo veneer sheets, a kind of bamboo fiber composite.”

Xiao said that interior detailing is similar to the wood frame houses in North America, noting that the design conforms to current U.S. building codes requirements for quake resistance.

“The relief house contains two windows, fans and locations for LPG stove or bath unit, satisfying basic needs for shelter for a family of up to four,” he said.

A first batch of 20 units donated by Hunan University will be sent to the affected area soon, Xiao said. A Chinese newspaper, the China Press, wrote a story about Xiao’s work, leading to contributions for further units.

Xiao ticked off the advantages of the structures: “Unlike tents, the bamboo quake relief house is insulated for heat and sound, is fireproof, allows residents to secure their possession and is more durable,” he said. “It is also inexpensive compared with temporary houses using other traditional materials, such as light-gauged steel. Finally, bamboo is a green and sustainable construction material, widely available in China and other Asian countries.”

The Chinese government estimated that more than one million relief temporary housing units are needed in Sichuan.