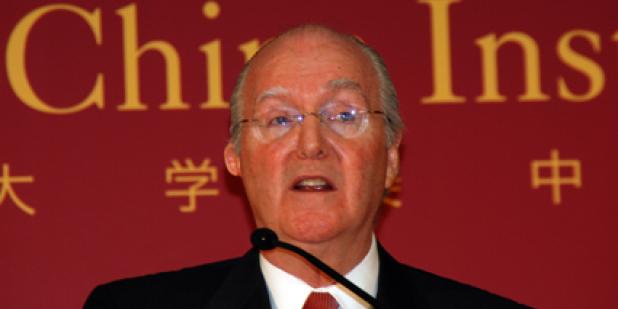 The United States Ambassador to China Clark T. Randt, Jr. (美國駐華大使雷德) said in the 2008 Herbert G. Klein Lecture on April 21 that he and President George Bush consider U.S.-China ties to be the most important bilateral relationship of the 21st century. The speech, hosted by the USC U.S.-China Institute (南加大美中學院) on April 21, also touched on the topics of human rights, trade and Taiwan.

Amb. Randt was introduced by USC Provost and Senior Vice President for Academic Affairs C.L. "Max" Nikias who noted that the lecture recognizes the many contributions Herbert Klein has made to the nation, including his service as President Richard Nixon's communications director. Amb. Randt echoed this, saying that thanks to the efforts of Nixon, Kissinger, Klein, and others in reestablishing ties with China, he could now have "the best job in the U.S. government."

reported that he’s worked continuously since his 2001 appointment to foster dialogue with the Chinese government on trade, human rights and other global and regional problems.  Amb. Randt’s first trip to China was in 1974 during the Cultural Revolution. Ration coupons, he remembered, were needed at that time to buy even staple foods such as rice and flour. But today, three decades after his first visit, the Chinese have become the world’s greatest collective consumers of luxury goods in the world. China has come a long way politically, culturally, and economically. China’s rise is the most significant development of our age, according to Randt, and he insisted that the U.S. welcomes China’s return to prominence.

The ambassador stressed that “the way we deal with China today is going to impact our world and the world our children and grandchildren will someday inherit for better or for worse and for many decades to come.” Both the U.S. and China share important strategic interests in promoting peace and stability, global health, international energy and security.

Amb. Randt next delved into some major issues involving China that have captured the global spotlight in recent months, including Taiwan, human rights, Tibet, the U.S. budget deficit and regional and global security. In order to develop an understanding of these problems, Amb. Randt said Americans must look at China’s history. He noted that current Communist Party leaders came of age during the Cultural Revolution of 1966-1976. Randt thinks the chaos of those days helps account for contemporary fears of instability. China’s leaders are fundamentally intolerant of reforms that might ultimately lessen or threaten their total control over state power. Despite this mentality, the Chinese government has, over the years, loosened its controls over many aspects of life, and the Chinese people, the ambassador said, enjoy greater freedom than ever before.

The United States has played a significant role in the past few decades in urging China to come to terms with its domestic problems, Amb. Randt said. President Bush has engaged in talks with Chinese President Hu Jintao over issues such as freedom of spiritual expression and economics. Randt believes that pressure from the United States has yielded significant success. China has agreed to resume bilateral meetings on human rights with U.S. Secretary of State Condoleezza Rice. In addition, the ambassador said that he and other officials have directly raised questions about the incarceration of AIDS activist Hu Jia and others in prison for simply having spoken out against injustice. With regard to ongoing political unrest in Tibet, both President Bush and Secretary Rice urged China to use restraint in handling the uprising and to engage in open dialogue with the exiled Tibetan spiritual leader, the Dalai Lama. A week after Randt’s talk, the Chinese government announced it would meet with an envoy of the Dalai Lama. President Bush, Ambassador. Randt emphasized, will not boycott the Olympics because it is a sporting event and should not be politicized in any way.

From the Chinese government’s perspective, Amb. Randt said, the most important U.S.-China issues remain “Taiwan, Taiwan and Taiwan.” He said the presidential elections in Taiwan March 22 were fair and successful and that the victory of President-elect Ma Ying-jeou is an opportunity to mend relations and reduce cross-strait tensions. The United States remains committed to a One-China policy and does not support Taiwan independence. America, Randt stated, is fundamentally opposed to any unilateral action by China or Taiwan that upsets the status quo. The historic meeting that took place between Chinese President Hu Jintao and Taiwanese Vice President Vincent Siew in Hainan on April 12 was an important step toward improving the relationship between the two countries.

From the American perspective, trade and economic issues are central in U.S.-China relations. China is currently the

third largest export market for the United States after Canada and Mexico. Since 2001, China has tripled its number of exports to the United States, creating a $256 billion trade imbalance. That imbalance is now three times larger than its deficit with Japan. Amb. Randt noted this imbalance is the source of friction, especially to the extent it results from China’s unwillingness to allow the yuan (which has appreciated 18.36%) to reflect the true strength of the Chinese economy. This currency manipulation, which makes imports from the U.S. and exports to China more expensive than they should be, ought to stop, Amb. Randt said. Another critical economic issue is weak  protection of intellectual property rights (IPR). Last year, the World Trade Organization filed six cases against China for restricting market access and failure to enforce IPR. Illegal downloads and illegal DVDs are pervasive in China, undermining cooperation on free trade. Amb. Randt illustrated his point by noting the popularity in China of the American television series Prison Break. The Fox network series is widely watched, even though it’s never been broadcast in China or legally distributed via DVD.

Despite these problems,however, Amb. Randt opposes erecting trade barriers. He believes that would harden Chinese policies rather than encouraging reform. He advocates increased dialogue between countries and China is the most effective way toward fostering change. He identified signs of progress stemming from the past couple rounds in of senior-level discussions under the Strategic Economic Dialogue rubric..

Amb. Randt noted that the U.S. has also sought to work with China to address issues such as the possible nuclear weapons proliferation on the part of North Korea and Iran and the brutal repression of civilian populations by the governments of Sudan and Myanmar (Burma). Progress on these issues has varied, with Beijing’s contributions to progress at the Six Party Talks on denuclearizing the Korean peninsula as the biggest success thus far. Amb. Randt noted that in this area and in fighting terrorism, the U.S. and China have moved forward, while in others progress has been limited.  On Sudan and Myanmar, for example, Amb. Randt noted that China has substantial differences with the United States and the UN Security Council on what must be done. The ambassador complained that too ofen China continues its “see no evil” approach to relations with problematic states. While promoting an ideal of noninterference in the internal affairs of others may be a core and convenient principle for China, Amb. Randt argued that as in peacekeeping, China needs to do more to carry its weight as a global force.

Amb. Randt stressed that a high level communications between the two countries is necessary to maintain cordial relations. Before President Bush , no sitting president had traveled to China more than once. President Bush, on the other hand, will be making his fourth visit to China this summer. Trust and understanding, the ambassador said, is built not only through high level exchanges, but also via people-to-people contact. Amb. Randt expressed pride at processing more than 400,000 nonimmigrant visas to Chinese visitors in 2007. More than 56,000 Chinese received education visas to visit the U.S. He noted that more than 1,200 students from China, Taiwan, and Hong Kong are presently studying at USC. At the same time, he called on more Americans to study Chinese and to travel to China to study there. Some 8,000 Americans currently study in China. Amb. Randt emphasized that these exchanges between the two countries are the “best way to dispel popular beliefs and perceptions.”

Amb. Randt concluded by arguing that China is not an enemy; rather, it is often an essential partner. Three decades after Deng Xiaoping set China on the road to market reform and normalized relations with the United States, China is considerably more prosperous, with many investment opportunities and markets to provide jobs for millions in both nations. There are natural differences between the United States and China, and the biggest mistake would be to become overly focused on those gaps in our values and policies. The U.S., Amb. Randt said with a smile, wholeheartedly welcomes China’s emergence on the world stage.

Ying-jia Huang is an international relations, East Asian languages and cultures, and history major at the University of Southern California. The 2007 Herbert G. Klein Lecture was delivered by J. Stapleton Roy, former ambassador to China and Assistant Secretary of State for Intelligence and Research. Click here for video of that talk.