Video: Scott Tong on China's Changes Through His Own Family History

Scott Tong's A Village With My Name offers a unique perspective on the dramatic changes in China from the late Qing dynasty to today. 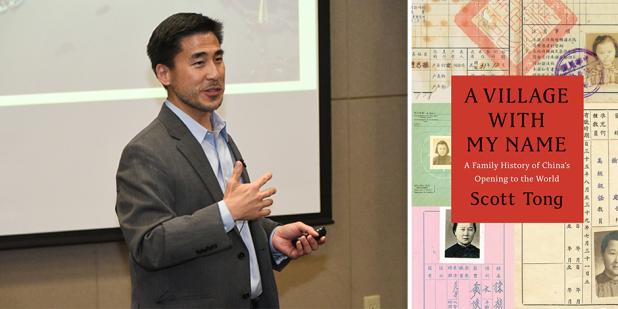 If you find yourself on the wrong side of history, no one tells yours. A Village with My Name: A Family History of China’s Opening to the World is longtime public radio journalist Scott Tong’s long view of China’s links to the West, told through the lives of five people across five generations in his own family. He begins by pursuing the lives of relatives and ancestors whose stories are deliberately left out of the family conversation:

·      A father of three, an enemy collaborator in World War II, exiled to a labor camp from which few survive
·      An eight year-old girl educated by American missionaries, one of the first Chinese girls to read and run who becomes the accompanist for the Nanjing Glee Club.
·      A toddler abandoned during China’s civil war, for decades never mentioned by the father who left him behind.
The untold stories and history help fill in an oft-ignored chapter in Chinese history: the contribution of mainlanders who adopted the ideas, music and literature of the outside world. Although A Village with My Name is a personalized, historical telling, it addresses questions people around the world are asking today about globalization, national identity and drawbridges: when a society lurches from open to closed to open, what is the human cost? Why do bad economics happen to good protectionists? Are open trade and borders the historical norm, or the exception?

About the Author
Scott Tong has reported from more than a dozen countries as correspondent for Marketplace, from refugee camps in east Africa to shoe factories in eastern China. He toured the oil sands of Canada and snuck into Burma. Currently he serves as correspondent for Marketplace’s Sustainability Desk, where his coverage focuses on energy, the environment, natural resources and the global economy.
In 2006, Scott opened Marketplace’s first permanent bureau in China, as Shanghai bureau chief. His first book, A Village with My Name: A Family History of China’s Opening to the World (University of Chicago Press, 2017), is a personal, journalistic discovery of China’s long and interrupted economic opening. More than a faraway story from a long time ago, it addresses the divisive questions about globalization and drawbridges that many countries are debating today.
His reporting includes special coverage of the 2016-2017 globalization backlash; Water: The High Price of Cheap; Venezuela’s economic collapse; the triumph of the shareholder value model in the U.S. and the Price of Profits; the challenge of long-term job creation in the United States; the 2011 Japan tsunami and recovery; the 2011 famine in the Horn of Africa; and the economics of one child in China. In 2013-14, Scott was awarded the Knight-Wallace journalism fellowship at the University of Michigan.
Scott joined Marketplace in 2004, after working as a producer and off-air reporter for the PBS NewsHour, where he produced a series of mini-documentaries from Iraq following the U.S. invasion in 2003. He’s appeared on the PBS NewsHour, the Aspen Ideas Festival and TedxFoggybottom.
A graduate of Georgetown University, Scott is a native of Poughkeepsie, New York. He lives in Arlington, Virginia with his wife Cathy and three children. He is an acknowledged soccer dad and cycles to work at a measured pace.

Scott Tong Discusses His Book "A Village With My Name: A Family History Of China’s Opening To The World"