Video: Panel discussion on "I, Ching," a musical about the life of Madame Mao 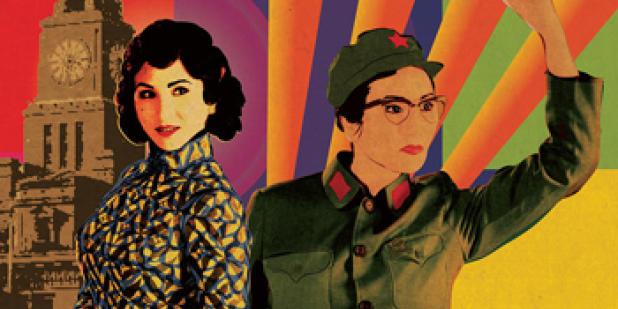 Jiang Qing 江青 (1914-1991) worked as an actress, traveled to the communist base area in Yan'an, married Mao Zedong, suffered an odd isolation, but rose to prominence during China's cultural revolution. In 1976, Jiang was arrested by her husband's successors and, after a 1980 televised show trial, was sentenced to death -- with a two year reprieve. Her sentence was commuted to life and she was eventually placed under house arrest. Suffering from cancer, Jiang took her own life.

Cecile Tang, considered one of the greatest Chinese language film directors of all time, began researching Jiang Qing's story in the 1970s. She ultimately decided that this remarkable story might best be told through a musical. She wrote the play, the lyrics, and recruited others to help with music and choreography. I, Ching opens in the Los Angeles area on September 14, 2012.

On September 6, 2012, the USC U.S.-China Institute, hosted a panel discussion of I, CHING. Playwright Cecile Tang, composer Lowell Lo, and lead actress Marsha Yuan engaged the audience in a candid discussion of their experience creating the play and preparing it for its American premiere.

Cecile Tang (唐書璇), playwright, was born in China and graduated from USC. Among her films are The Arch (董夫人, 1970) and China Behind (再见中国，1974). Ms. Tang left filmmaking and emigrated to the United States in 1979, becoming a respected restaurateur in Los Angeles. Many critics, however, see her influence in the so-called Hong Kong New Wave of edgy, groundbreaking young filmmakers in the late '70s and early '80s.

Lowell Lo is a songwriter, singer, music producer, actor and environmentalist. Born in Hong Kong, Lo was educated in the USA and has written over 800 songs and music for more than 100 movies. He's won numerous awards in Hong Kong and Taiwan.

Marsha Yuan, actress, plays Jiang Ching (Jiang Qing 江青). Marsha studied musical theater at the American Musical and Dramatic Academy (AMDA) in New York City. Over the past 12 years she has established a career as an actress as well as a singer/dancer in Hong Kong.