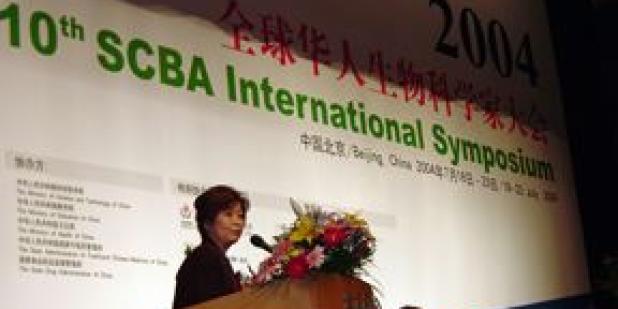 USC scientists were in Beijing last month as China’s capital city played host to an international group of bioscientists in what organizers hope may be a jumpstart to scientific research in Asia.

The 10th meeting of the Society of Chinese Bioscientists in America (SCBA), held in Beijing the week of July 18, brought together more than 2,000 researchers from around the world—including nearly a dozen from the Keck School of Medicine and USC School of Pharmacy—focusing on the life sciences.

Held in the Beijing International Convention Center on the grounds of the former Asian Games Village, the meeting was co-hosted by the Chinese Academy of Sciences, Peking University and the Chinese Ministry of Science and Technology.

The SCBA began 20 years ago with a small group of Chinese researchers working in the United States. Their goal was to create an organization allowing them to interact with similar life-science researchers to network and share their scientific findings.

“It was just a small group of us back then,” said Jean C. Shih, a University Professor and the Boyd P. and Elsie D. Welin Professor of Molecular Pharmacology and Toxicology at the USC School of Pharmacy.

Shih is one of the group’s founding members and organizer of this year’s meeting. “Since then we've grown to nearly 3,000 members,” she said. The society's goal is a noble and challenging one: To promote research and education in the life sciences worldwide and to help its members in networking and developing their scientific careers to the fullest.

The Beijing meeting was the first meeting of the society to be held in China.

Forced to postpone the meeting for a year due to the SARS outbreak, Shih—as immediate past-president of the society—was responsible for this year’s symposium.

“Our goal at this meeting,” she said, “was to stimulate the general public as well as world leaders and their interest in the basic life sciences.”

The SCBA meeting garnered media attention not only for its speakers, which included Shih, but also by the opening ceremony attendance of five Nobel laureates, including Caltech president and Keck Board of Overseers member David Baltimore.

Also present at the meeting was USC School of Pharmacy Dean Timothy Chan, who awarded travel grants to research fellows.

The society’s worldwide reputation has grown dramatically in the past 20 years. Other Asian countries have approached the group repeatedly in hopes of hosting the organization’s biennial meeting. Previous meetings have been held in cities such as Hong Kong, Singapore, San Francisco, Baltimore, Vancouver (Canada) and Toronto. “It's a good sign,” said Shih, “that the organization is growing larger in numbers and reputation.”

A grand closing banquet held in the palatial Great Hall of the People, overlooking Tiananmen Square, emphasized the society’s importance.

Shih is looking forward to having future meetings back on American soil. The society’s next symposium will be in 2006 in California.

“We keep trying to have it back in the United States; after all, it is a society for American-based researchers,” she said. “But many Asian countries have repeatedly asked us to hold the symposium in their country in hopes that it will help their growing life-science industries.”

Dozens of young life-science students and scientists who had heard about the symposium on Web sites registered for the meeting, getting an opportunity to hear and meet world-class scientists. Many students told USC’s Shih that what they learned there in one week was worth three years in school.