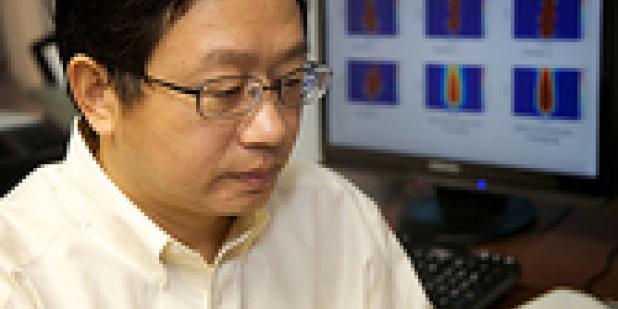 By Maxine Lym
Originally published by USC News on August 25, 2009

A saline aquifer is a subsurface geologic formation which has certain characteristics that could allow it to store significant amounts of carbon dioxide. The Global Climate and Energy Project is awarding close to $2 million for the three-year program, which will use geological modeling, reservoir simulation and laboratory experiments to identify the best approaches to realizing this potential.

Dongxiao Zhang, a professor in the USC Viterbi School of Engineering’s Astani Department of Civil and Environmental Engineering, is directing the 39-member team of scientists, researchers and students from USC, Peking University and the China University of Geosciences at Wuhan.

Qingdong Cai, professor of mechanics and engineering science at Peking University, and Yilian Li, professor of environmental studies at Wuhan, are the co-directors of this effort.

“Through the generous support from (the Global Climate and Energy Project), this research is investigating the fundamental issues associated with carbon sequestration in Chinese saline aquifers,” said Zhang, who holds the USC Viterbi School’s Gordon S. Marshall Professorship in Engineering Technology. “We believe such understandings could help guide similar sequestration efforts worldwide.”

“China and the U.S. are the world’s largest emitters of carbon dioxide — and both rely heavily on coal to produce electricity,” said Sally Benson, director of the Global Climate and Energy Project. “We are very excited to support this unique collaboration between three outstanding research institutions in China and the U.S. that could advance technologies for providing reliable electricity supplies while reducing global carbon emissions.”

With the support and participation of four international companies (ExxonMobil, General Electric, Schlumberger and Toyota), the Global Climate and Energy Project explores the science that could lead to energy technologies that are efficient, environmentally benign and cost-effective when deployed on a large scale. The new effort brings the total number of Global Climate-supported research programs to 66, with funding of $87.4 million committed since the project’s launch in the fall of 2002.