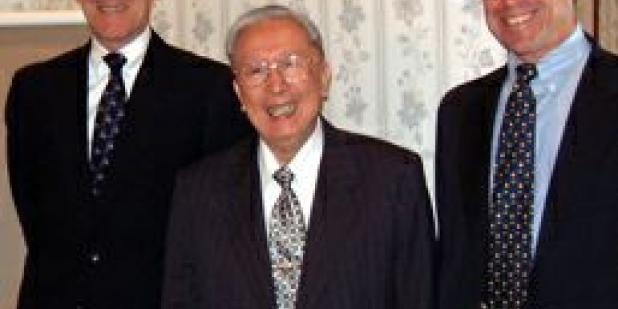 by Jon Nalick
Originally published on October 19, 2001 in HSC Weekly

Stephen J. Ryan, dean of the Keck School of Medicine received Wu Jie Ping, co-chair of the Chinese People's Congress and the highest-ranking Chinese official ever to visit USC, on Oct. 12.

Ryan, on behalf of USC, has signed agreements of collaboration with the most prominent academic institutions in China, such as the Chinese Academy of Medical Sciences and the Chinese Academy of Preventive Medicine and the Peking Union Medical College. Several projects built on these alliances include comprehensive programs for emergency medicine/trauma and HIV/ AIDS prevention. Future projects may include programs in genetic medicine, pediatrics and smoking prevention.

Richard Drobnick, vice provost of international affairs, was able to join Ryan and Wu, as well as Ron Kaufman, senior associate dean for administration, and Robert Tranquada, former dean of the Keck School of Medicine and emeritus professor of family medicine. In this meeting, Wu and Ryan expressed their intentions of building on the relationship between the Keck School and Chinese organizations for the mutual benefit of the institutions.

"The excellent friendship and support of Wu Jie Ping has allowed our messages to reach on several occasions President Jiang Zemin, Prime Minister Zhu Rong Ge and the Minister of Health. I believe that Keck School can play a key role in the collaboration between China and the US in regards to health care," Ryan said.

Pablo Valencia, director of technology transfer and international programs, arranged the meeting and has promoted the collaboration. He said the ability of Keck School officials to maintain associations with major governments has bolstered USC's reach worldwide: "Through our international program we have been able to consult with top officials of several strategic nations: China, Russia, India, Indonesia, Mexico and Brazil. The health ministers of those countries are responsible for the health care of more than half the world's population."

Underscoring the importance of Latin American connections, on Oct. 29, USC will receive a delegation of officials from the Universidad Nacional Autonoma de Mexico (UNAM), with participation of representatives from the State of California. The parties will study new legislation oriented to facilitate the exchange with Mexico. UNAM and the Keck School of Medicine are the key academic elements of the project, Valencia said.