These athletes row to the beat of a different drum 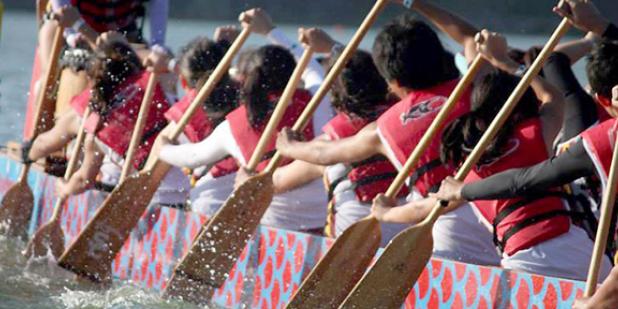 Hunched in boats adorned with dragon heads, the competitors wield their paddles, slicing through seafoam green water as the sound of drums echoes in the distance.

In perfect sync, the athletes row with one collective goal — to win a race. Their sport has been around for hundreds of years in China, and thanks to globalization, it has found itself in our own backyard.

Since 2005, the USC Dragon Boat has hit the water against other universities in a test of stamina and endurance. California teams meet five times a year, racing in events ranging from 250 to 1,000 meters and requiring at least 20 paddlers, one caller and one steersman.

With nearly 30 to 40 members, the team competes against UCLA, Stanford University and University of California squads.

The USC group is composed primarily of engineers, including captain Harrison Lee, a senior studying biomedical engineering. He joined the team as a freshman and has since paddled around the world for various teams, including the Killer Guppies, one of the first competitive dragon boat teams in California.

“Dragon Boat is a team sport,” he said, “and every member makes a significant contribution to determining the team’s success.”

Along with the coaching staff, Lee develops training drills that focus on improving each individual’s strength. As captain, he must ensure that the drills are effective, and as an engineer, he modifies ineffective ones, optimizing the athletes’ performances.

On Nov. 9, USC brought home the bronze medal for a third-place finish in the B division of the California Dragon Boat Association College Race. USC has won one gold, one silver and one bronze medal this season.

Every weekend, the team travels to Long Beach for three-hour practices in rented boats. Its physical dexterity and communication skills are tested throughout an entire race. With the help of the caller who monitors timing and form, each paddler must be in sync with his mates for the boat to glide effectively across the water as the steersman helps them maneuver in a straight line.

“The most important factor is that the boat is only as strong as the weakest paddler,” said Alyssa Naritoku, a sophomore majoring in biomedical engineering. “Because if one paddler is slightly off in the stroke, that could cause the boat to slow down.”