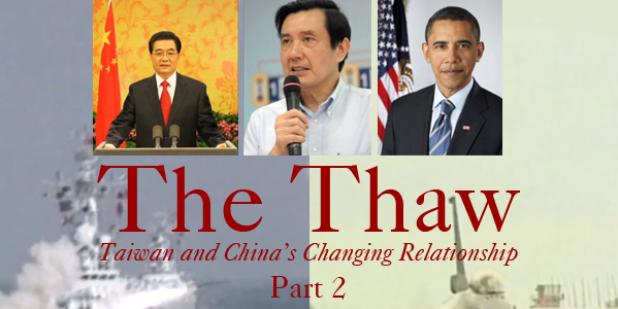 “[The Taiwan-China relationship is] the one place where, if something goes seriously wrong, the U.S. could get involved in a shooting war with China.”
- Raymond Burghardt, President of the American Institute in Taiwan

China’s leaders have long asserted that Taiwan is an inseparable part of China and it is a matter of justice and national honor to restore control over the island and its people. Meanwhile a large majority of Taiwan’s people are not in favor of becoming part of China. The U.S. takes no formal position on how the standoff is to be resolved, but asserts that it should be resolved through peaceful means. While the U.S. ended its defense treaty relationship with Taiwan when it formally recognized the People’s Republic in 1979, severing formal ties with Taipei, the U.S. is still bound by the Taiwan Relations Act to sell Taiwan weapons of a defensive nature. Further, the U.S. asserts that maintaining peace and stability in the region is in America’s national interest. Taiwan remains a central issue, and as Burghardt’s statement above notes, it is the one issue where the interests of the U.S. and China are so great and the commitments so deep, that military conflict could erupt – if the situation is not handled carefully by leaders in Beijing, Taipei, and Washington.

This new USC U.S.-China Institute documentary looks at the security dimensions of the Taiwan-China relationship. It is reported by Mike Chinoy, USCI senior fellow, with principal videography and editing by USCI’s Craig Stubing. A generous grant by the Chiang Ching-kuo Foundation along with the financial support of a number of other agencies and individuals made the documentary possible.

The documentary features news footage and exclusive interviews with:

Raymond Burghardt, President of the American Institute in Taiwan (which carries out U.S. diplomatic functions)

A high definition version of this documentary is available at the USC U.S.-China Institute’s YouTube channel.

Part 1 of The Thaw (focusing mainly on expanding economic ties) is available at the USC U.S.-China Institute website and our YouTube channel.

Video: Taiwan and China’s military buildup – part 4 of Election ’08 and the Challenge of China ( USCI website and YouTube channel)

USCI Symposium on the 2008 Taiwan Election

USCI Symposium on the 2012 Taiwan Election