The Women’s Tennis Association is at odds with China’s government. How big is tennis in China?
December 2, 2021
Print 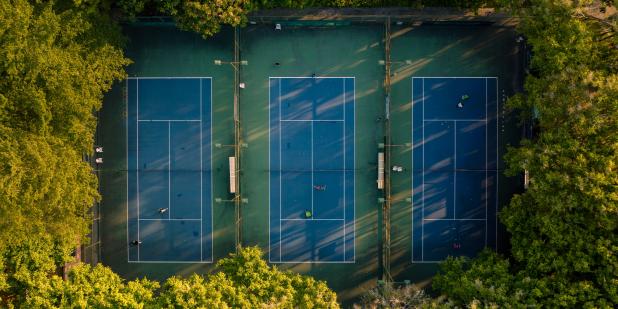 Ahead of the Japanese invasion and China’s civil war, members of the Shanghai Country Club had access to ten tennis courts. By 2016 China had more than 30,000 courts. Some Chinese women earned Grand Slam titles. The sport was growing in popularity and international stars routinely played in China. By 2019, Shenzhen hosted the Shiseido Women’s Tennis Association (WTA) Finals. Australian Ashleigh Barty won there, earning the US$4.4 million top prize, the highest ever awarded to any singles champion, male or female. Pre-pandemic spending on tennis in China (events, advertising, equipment and clothing, broadcasts) might have reached $4 billion.

As the charts below show, an estimated 14 million Chinese play tennis, almost one-fourth of the world’s total. But only 3% of ranked professional players are from China. Peng Shuai 彭帅 is one of those. She’s won 23 doubles titles, including at Wimbledon and the French Open. 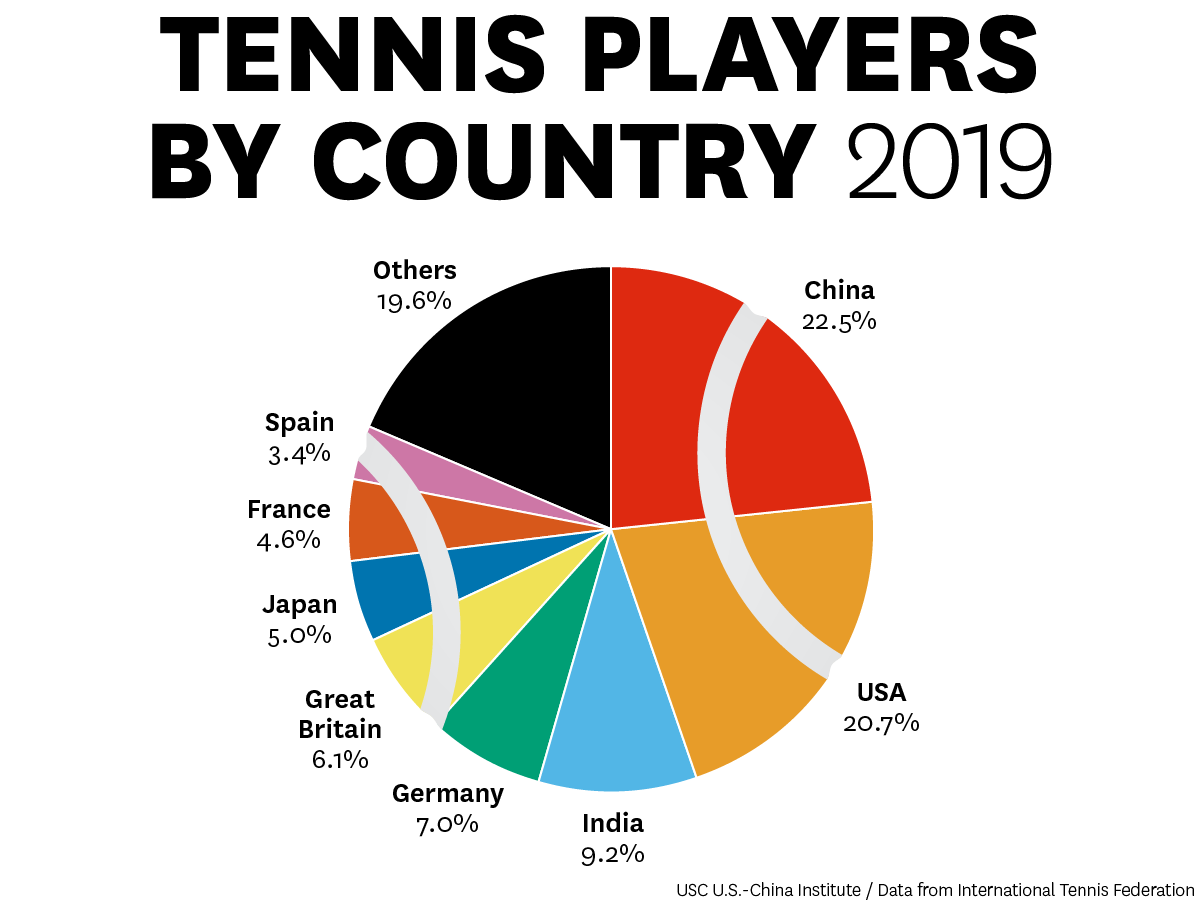 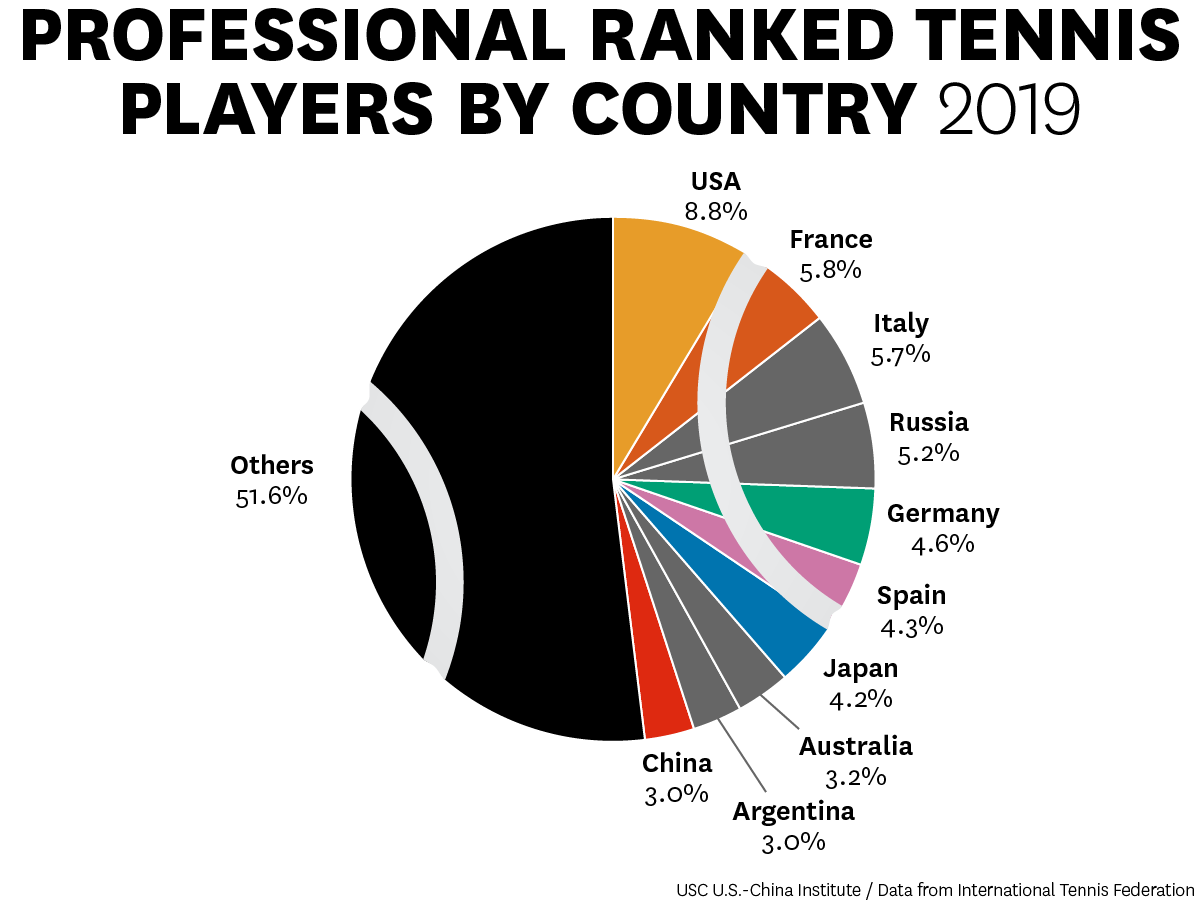 A month ago, Peng posted on Weibo that she had an extended sexual relationship with Zhang Gaoli, who retired four years ago as a member of the Chinese Communist Party politburo standing committee and vice premier. Peng wrote that Zhang had assaulted her. The post was quickly deleted and searches about Peng and Zhang were censored. The WTA sought to speak with her and has not been able to do so. Prominent tennis players such as Naomi Osaka and Serena Williams joined the organization’s #WhereisPengShuai campaign. Chinese state television shared a note Peng is said to have sent the WTA. In it she explains that she’s been resting. Chinese media figures took to Twitter, a platform blocked in China, to share images and video to argue that Peng was quite all right. Those media outlets didn’t publish or broadcast in Chinese to their audiences there, since that might necessitate discussing why Peng’s well-being was newsworthy. Representatives of the International Olympic Committee held a video chat with Peng, a participant in three Olympics, but do not seem to have asked about her allegations or whether or not her movements or speech was restricted. Some complain that the IOC may put its relations with China’s government, host of the 2022 Winter Olympics in three months, ahead of concerns for an individual athlete.

The WTA Board of Directors and its head, Steve Simon, are among those not satisfied with the IOC’s conversation with Peng. Yesterday, Simon wrote, “I have serious doubts that [Peng] is free, safe and not subject to censorship, coercion and intimidation. The WTA has been clear on what is needed here, and we repeat our call for a full and transparent investigation – without censorship – into Peng Shuai’s sexual assault accusation.” He went on to announce the suspension of all WTA tournaments in China, including Hong Kong, “no matter the financial ramifications.”

Many have contrasted the WTA’s determination to stand with one of its athletes with the response of some to the Chinese government’s punishment of the NBA in 2019. A Houston team official tweeted support for prodemocracy protests in Hong Kong. In response, NBA broadcasts in China were halted for more than a year. Laker’s star Lebron James, aware of the China market’s importance to the economic health of the NBA and to footwear and other companies, said that while all, including the Houston official, have freedom of speech, he should have thought more carefully about the potential ramifications of his tweet.

All businesses working in China would like to stay away from politics. But in China #metoo, sources of cotton or a cartoon episode can quickly become political. In Houston last week, Chinese and American athletes paired up to compete as partners in doubles competition. This celebrated the fifty year anniversary of the ping pong diplomacy that helped bring the U.S. and China back together. Today, global sports businesses face new challenges.