This week's issue of the USC U.S.-China Institute's newsletter looks at China's 60th anniversary celebration, invites college students to apply for positions at the Shanghai World Expo, and brings information about events and exhibitions across North America.
October 1, 2009
Print

"Cue the sun,” is a classic line from The Truman Show, a 1998 Hollywood film. Beijing’s made for television National Day celebration was just as scripted, but unlike The Truman Show, the cast stuck to the plan. As his predecessors did in 1984 and 1999, Hu Jintao, chair of the Communist Party’s Central Military Commission, began the festivities by reviewing the troops. The military parade which followed featured an impressive array of Chinese made military hardware (and, thanks to giant television screens, included naval vessels) and precision marching units. After the tanks and missiles and fighter aircraft, four Chinese leaders were honored: Mao Zedong, Deng Xiaoping, Jiang Zemin, and Hu Jintao. For each, a recording blared out a bit of a key speech as marchers held up slogans associated with each. Mao was remembered as the founder of the People’s Republic, Deng as the architect of economic reform and the opening to the outside world, Jiang for broadening the Communist Party to include leading productive forces, even if they might be capitalists, and Hu for pushing for scientific development. Other floats and marchers celebrated scientific, athletic, and other achievements, or China’s regional and ethnic diversity. With the need to reunify the motherland by “bringing back” Taiwan an official and ongoing priority, the Taiwan float received special attention. Among its features was a replica of Taipei 101, for several years the world’s tallest building.

The months of drilling and the recent full dress rehearsals showed. According to the People’s Daily, the parade plan allowed those driving the nuclear missile launch vehicles just a 0.05 of a second margin of error.

Even the weather was in step – the skies over Beijing were blue and beautiful.

Achievements were marked, and an optimistic and ambitious outlook was conveyed.

With nightfall, the show resumed with dancing and an unbelievable fireworks display. Television cameras showed party and state leaders dancing with people in ethnic costumes, reinforcing the theme of unity across ethnic lines. (Click here to see images of and read about past national day celebrations.)

Many people in China will now have several days off. The national day holiday and others were extended in recent years to afford people a chance to relax and spend money. At the recent G-20 summit in Pittsburgh, China asserted its commitment to aid in rebalancing the global economy. This primarily means finding ways to increase domestic consumption.
Government offices and commercial enterprises have had banners and posters marking the 60th anniversary for quite some time. The Chinese websites of many foreign companies also joined in. Below are a few samples. 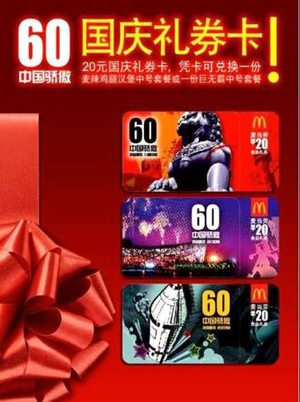 McDonald’s / Coca-Cola
Buy a large meal and get a free Coca-Cola glass – for the national day 60th anniversary, raise a glass and cheer.

KFC
Nationwide celebration of the 60th anniversary of the country’s founding. 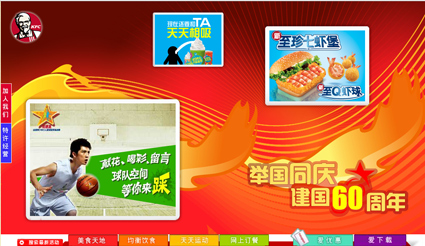 Walmart
Together with you, celebrating a brilliant 60 years 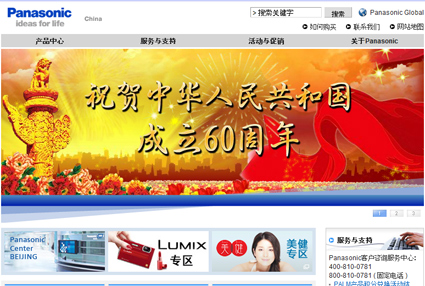 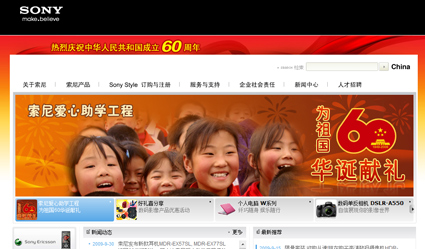 The Sony site is a bit different from others. You can click on the banner to learn about Sony’s work to aid students. This effort began in 2003. The site explains that this year Sony’s working in Shaanxi province, in “the revolutionary base area” where Deng Xiaoping and Xi Zhongxun – (father of Xi Jinping, China's vice president) worked and fought. The site doesn’t mention who those revolutionaries fought against. The firm is busy replacing school furniture and providing other equipment.

Instead of marking the 60th anniversary, Coca-Cola’s site looks ahead to next year’s Shanghai World Expo. It features a poster which embraces the “Better City, Better Life” expo slogan by encouraging everyone to “Change [things] little by little, creating a new and exciting city.” 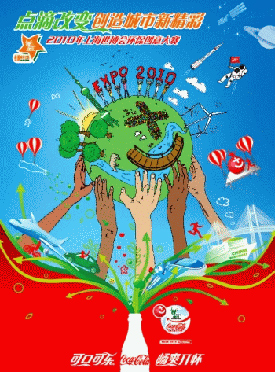 The United States only recently committed to participate in the Shanghai Expo and construction crews are busy erecting the USA Pavilion. We are delighted to be involved in the Expo effort. Later today, the USC U.S.-China Institute will invite college and university students to apply to play important roles at the USA Pavilion. The Institute is working with the USA Pavilion committee to select 160 bright and able people to serve as student ambassadors at the Pavilion. Those selected will receive training, airfare, housing, and a stipend to cover meals and local transportation. They will work in Shanghai from April 15 to July 31 or from July 15 to

October 31. Millions of guests, including VIP business and government delegations, will visit the Expo and Pavilion to see cutting-edge technology and other displays. The Pavilion will also host hundreds of conferences, screenings, and performances. Student ambassadors are required to be currently enrolled, to have studied Chinese for two years (or to have otherwise acquired an equivalent level of proficiency), and to be upbeat and outgoing. The Institute and Pavilion are anxious to assemble a geographically diverse group of ambassadors from a variety of academic disciplines and backgrounds. Please look for our formal call for applications later today. The announcement will also be posted at our website and will offer detailed information about the program. Applicants will need two letters of recommendation. All materials must be submitted online by October 30, 2009. Selection decisions will be sent out in December. This is a rare chance to be part of a huge international gathering in one of the world’s most dynamic cities. Please share this announcement with any who might be interested in pursuing this opportunity.

As the listing below makes clear, those interested in China have many programs and exhibitions to choose among. Please remember that our calendar covers all of North America. Here at USC, October will be a very busy month. Next Thursday (Oct. 8), Prof. Jing Wang of the MIT will speak on how Chinese NGOs utilize social media and other web 2.0 technologies. On Oct. 12, a top delegation from China’s Ministry of Commerce will, along with U.S. attorneys, discuss China’s new patent law and its draft telecommunications law. On Oct. 13, the School of Cinematic Arts will screen six films produced in Beijing this summer by USC students working with Chinese students. On Oct. 14, director Micha Peled will introduce and discuss China Blue, his film about migrant workers and global supply chains. On Oct. 15, we feature a talk by Dan Rosen on China’s outbound investments. We hope you will join us for one or more of these events and that you’ll visit the US-China Today magazine website. Among the newest features there is a multimedia look at the current mash-up of calligraphy and graffiti at the Pacific Asia Museum.

As always, we appreciate your feedback. Please write to us at uschina@usc.edu.

10/13/2009: Romance, Insularity, and Representation: Wong Kar-wai's In the Mood for Love
UC Berkeley
IEAS Conference Room, 2223 Fulton Street, 6th Floor, Berkeley, CA
Cost: Free
Time: 4:00PM - 6:00PM
UC Berkeley presents a talk by Giorgio Biancorosso on the predicament and reactions of a female character in the 2000 film "In the Mood for Love."

10/07/2009: Sex and the Revolution: China in the Sixties
Indiana University
University Club Faculty Room, IMU, Bloomington, CA 47405
Cost: Free
Time: 12:00PM - 1:00PM
Li Zhensheng, will give a special lecture on his personal experiences with sexual repression during the Cultural Revolution.