A special issue of Talking Points noting the passing of Morley Safer, a CBS newsman who managed to produce a report on China during the Cultural Revolution.
Print 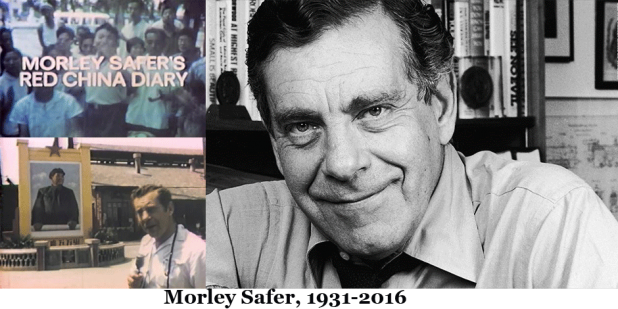 May 16 marked fiftieth anniversary of the start of China's Cultural Revolution in 1966. At the time, there were no Americans and few Westerners reporting from China. The first U.S. television network reporter to bring a sense of China at that time into American living rooms was Morley Safer. Safer passed away last week at 84.

Safer was better known, of course, for his reporting from Vietnam and for his forty-six years as a correspondent for 60 Minutes. In 2011, though, USCI's Mike Chinoy and Craig Stubing interviewed him about that China scoop for our Assignment:China series. The "China Watching" segment in the series opens with Safer. Click here to watch the segment at our website or here at our YouTube channel. Excerpts from the Safer interview begin at 37:48.

******
"If anything frightens a visitor to China today, it is the children, with their mindless parroting of Mao thought and acceptance of it."
- from Morley Safer's Red China Diary, broadcast August 15, 1967
*****

Morley Safer was already a well-known foreign correspondent when he went to China in July 1967. He moved from newspapers to television in 1956, reporting on the Suez Canal Crisis, the Algerian War, and the building of the Berlin Wall. In 1965, Safer set up the CBS bureau in Saigon. His report on the burning of a village by U.S. Marines, sparked heated debate over the mission and tactics of U.S. forces in Vietnam. Later Safer was aboard a helicopter that was shot down.

In 1967, Safer was CBS's London bureau chief. He heard that it was possible to get tourist visas to China. So he applied for one, explaining that he was an archaeologist. Cameraman John Peters, a British citizen, applied saying that he was a travel agent. They spent nearly a month in China, visiting Beijing, Shanghai, Nanjing, Xi'an, Yan'an and Guangzhou. At the Beijing airport they were met by a tourism official who gave them copies of the Selected Quotations of Chairman Mao. After reciting a couple of those quotations, they were ready to begin.

Peters used a camera made to look like the sort of camera a tourist might have. They told the tourism official Peters would use the film to attract customers, to explain why Safer would sometimes stand in front of the camera and speak into a microphone. There were numerous tense moments during the trip. In Xi'an, they visited a museum that was closed. When the museum director was brought out, he was being shouted at by others and his face was bruised. Safer thought he'd been beaten. Flying to Shanghai, mechanical trouble forced the crew to land in Nanjing. Traveling to their hotel, Safer peeked out past the closed curtains of their car and saw what he believed to be burned out cars and other debris left after a violent clash between competing factions. The tourism official advised him to be careful.

But at an agricultural exhibition in Shanghai, Safer observed that, explanations to the contrary, not all the equipment had been manufactured in China. Someone heard this and he and Peters were dragged to a hearing in the lobby of a hotel. Safer struggled to explain that he hadn't intended any insult, but the woman in charge grew more angry. The tourism official whispered that he better apologize. And so he did, with the sort of linguistic flourish Safer became famous for. He blamed Western propaganda for his lack of knowledge of and appreciation for the achievements of the Chinese people and said that the visit had opened his eyes to these.

Safer and Peters hid their 9,800 feet of 16 mm film in their clothes. While their bags were searched when they left China, the film was not found.

What Safer saw and heard over and over was the veneration of Mao Zedong. This was a key theme of the episode of CBS Reports dedicated to the Safer and Peters's trip. Nonetheless, to guard against the charge that it might be soft on communism, a network official had Safer change the name of the documentary from "Morley Safer's China Diary" to "Morley Safer's Red China Diary."

Of course, Safer is best known today for his forty-six years as a correspondent on the popular news magazine 60 Minutes. He reported hundreds stories for the show, including one he completed just two months ago. He earned countless awards and the immense respect of his fellow journalists. This was clear in the celebration that CBS aired a few days before Safer passed away and in the obituaries that have followed. Many of these note that he was one of the few foreign reporters to get into China during those days of upheaval, but these don't have the details of how he and Peters managed it or what they saw while there.

Safer's report attracted considerable attention. Ahead of the broadcast, the New York Times emphasized how he and Peters had managed to get in, "Safer and his cameraman John B. Peters, who have probably seen a few thrillers, hit upon a ruse straight out of Alfred Hitchcock." Not everyone was a fan; the New York Times reviewer complained that the documentary mainly proved that Safer had gotten in to China. On its editorial page, the Hartford Courant complained Safer showed "the Red China Mao wants us to see" and "[i]t isn't every dictator who can get an hour of network TV for free."

But most reviewers welcomed the footage from within China and appreciated the controls Safer overcame to bring the story to viewers. One described it as "the most intriguing documentary of the past several years." Newsday loved the "Safer Style." The Chicago Tribune described it as the most through glimpse into China available in months. The Christian Science Monitor noted its limits and its contribution: "This color documentary... was much more than a tourist's view... True, it wasn't a network 'white paper' on Red China. But it was a fascinating hour of insight into what makes China run. For that, CBS and Morley Safer deserve a burst of applause."

Safer visited China at the most fevered time in the Cultural Revolution. Even today the Chinese and their government are having trouble coming to grips with how to understand the Cultural Revolution. Safer and Peters had to make the best out of a limited opportunity. They successfully conveyed the intensity of the Mao cult and how politics invaded the workplace, the school, and the village. Safer concluded his report with a pertinent observation: while the Chinese were too consumed by their own affairs to express curiosity about the outside world, Americans needed to use the freedom they had to learn more about how others lived and what they thought.

Thanks for reading. We welcome your comments. Send them to us at uschina@usc.edu or reach us via Facebook or Twitter. Please share Talking Points with friends and colleagues.