This week's Talking Points looks at basketball in the U.S. and in China and as always provides information about China-centered events, exhibitions, and screenings across North America.

"At first my boyfriend loves Kobe, then I love him more than my boyfriend. He is so strong, charming and aggressive…. Most important is his faultless performance on the basketball court."
Yao Di, a Beijing fan, quoted by USA Today on August 21, 2008

Today was the Lakers National Basketball Association championship celebration. Tens of thousands of people lined the parade route along Figueroa Boulevard from Staples Center to the Coliseum where more than 95,000 awaited the triumphant team. The procession went right by the USC U.S.-China Institute offices. Here are a couple of photos:

The NBA is aiming at a global audience. U.S. media cutbacks resulted in fewer American journalists covering the final series than in the past, but the drop was more than made up by journalists from foreign papers and broadcast outlets. China, of course, looms large in the NBA’s plans. Back in September 2007, Talking Points noted the NBA was opening a China subsidiary. Games have been broadcast there for many years, but now the league has television deals with 51 different Chinese broadcasters. The NBA's Chinese site often gets more visitors than the American one. Other investors in NBA China include Disney’s ESPN, Legend Holdings (a computer company and property developer), the Li Ka Shing Foundation (the charitable arm of a Hong Kong conglomerate), and the investment arms of the Bank of China and China Merchants Bank.

Kobe Bryant is the sport’s biggest star and, as the quote above suggests, his fans are passionate. And they spend money. Figueroa Street was filled with Bryant jerseys today, but 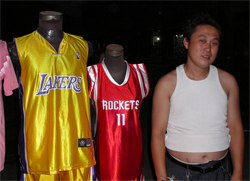 Kobe’s jersey is the NBA’s topseller worldwide. In China, only Yao Ming’s number 11 outsells Kobe’s number 24. The picture below hints at the market penetration of these goods (both licensed and pirated). We snapped this photo last summer at a street stall in Pingyao, a small city in the Shanxi coal region.

The China market is so important to Nike, that it created a reality show which ran on one of the Central Chinese television networks last spring. Kobe Disciples (Kobe mentu Kobe 门徒) had Kobe and others putting 24 Chinese athletes through a rigorous training program.

China’s top basketball league is the Chinese Basketball Association, which was created in 1995. Some NBA players such as superstar Yao Ming and Laker reserve Sun Yue got their professional starts in the CBA. A number of Americans play in the CBA, Lee Benson was among the stars of the 2008-2009 season, averaging 34 points a game for the Shaanxi Kylins (陕西麒麟). Benson’s 35 years old, big, 6’11”, and has had an unusual career. A high school star, Benson served 8 ½ years in prison for dealing drugs and using a gun to abduct and threaten a man in an argument over a drug deal. Some Americans who have played in China later reached the NBA. Chris Anderson, the “Birdman,” now with the Denver Nuggets played for the Jiangsu Dragons. The Guangdong Southern Tigers defeated the Xinjiang Flying Tigers in the CBA finals in May.

Some in China aren’t content rooting for or even owning CBA franchises. Late last month, a Chinese consortium announced it was seeking to buy 15% of the Cleveland Cavaliers.

Sports occupies a privileged place in U.S.-China relations. Ping pong diplomacy helped advance our ties 28 years ago. It’s a safe bet, though, that no one who saw those friendship matches between the U.S. and China would have guessed that the Kobe Bryant/Lebron James puppet commercials would be on Chinese television or that American sports agents would be trolling Chinese high schools and colleges looking for basketball talent.

Filmmaker Frederick Marx is best known as the producer of Hoop Dreams, the Academy Award-nominated film about high school players with NBA ambitions. One of his first films, though, was Dreams from China which he filmed in Beijing and Tianjin in the 1980s. On Thursday, he will screen a rough cut of his new film, Journey from Zanskar. The film focuses on sacrifices Tibetan families in a corner of Northern India make in order to secure an education for their children and to preserve their culture. We hope you can join us. Details are below and in the calendar section of our website.

Please pass Talking Points on to friends and colleagues. They can subscribe at: http://china.usc.edu/subscribe.aspx.

06/24/2009 - 06/25/2009: Crude Oil
Hammer Museum Gallery 6
Time: 11:30am
Cost: Free
An audacious undertaking for both filmmaker and audience, this film installation documents a workday at a remote Chinese oil field, from a stolen nap in a break room to the massive drills plunging into the earth.

06/27/2009: First Emperor
Bowers Museum
2002 North Main St, Santa Ana, 92706
Phone: (714) 567-3600
Time: 1:30PM
Based on the latest research, including location photography at key sites in China, this film sheds new light on the achievements, ambitions, and legacy of the enigmatic First Emperor of China—an emperor who wished to reign for all eternity. 40 minutes.

06/19/2009: The Financial Crisis and the Changing Role of Workers in China
Rayburn House Office Building, Room B-318
Time: 10:00AM - 11:30AM
The Congressional-Executive Commission on China present a roundtable discussion on the financial crisis and worker's roles in China.

06/22/2009: Buddhist Traditions of Tibet and the Himalayas (NEH Seminar)
Contact: Todd Lewis
Phone: 508-793-3436
Email: tlewis@holycross.edu
The College of the Holy Cross a summer program focusing on the study of Buddhism in Tibetan and the Himalayas.