Ethnic violence in Xinjiang, US-China-Russia relations, and the passing of Herb Klein are the subjects of this week's USC U.S.-China Institute newsletter. The newsletter also includes information about China-related events and exhibitions across North America.
July 9, 2009
Print

At least 150 people have been killed and thousands more have been injured or arrested in China’s Xinjiang Uighur Autonomous Region since Sunday. Much of the violence has been carried out by ethnic mobs. A curfew has been imposed, riot police are patrolling the streets, and additional security personnel have been rushed in. Internet ties to the region have been cut. Chinese President Hu Jintao hurried back to Beijing, skipping a G-8 summit meeting.

"We have been good to them. We take good care of them. But the Uighurs are stupid. They think we have more money than they do because we're unfair to them."
-- Liu Qiang, man marching with a Han crowd in Urumqi, quoted by the Associated Press, July 7, 2009

The Han are China’s largest ethnic group, constituting over 91% of the country’s population. Liu’s belief that the Han, who dominate China’s Party-State and its economy, have treated ethnic minorities benevolently is common among the Han. Many Han argue that the Uighurs should be grateful for the assistance accorded them. Liu is right that many Uighur disagree and contend there is systematic discrimination against them and that economic gains in Xinjiang have flowed disproportionately to Han. Uighur advocates note that Han have migrated to Xinjiang in large numbers. In 1953, when the People’s Republic conducted its first census, Uighurs made up 75% of Xinjiang’s population. There were fewer than 300,000 Han civilians residing in Xinjiang then, about 6% of the region’s population. Thanks to government initiatives, by 1964, Han made up one-third of the population and by 1982 they constituted 40% of the population. Since then Xinjiang’s total population has grown to more than 20 million, about 45% Uighur and 40% Han. Han are concentrated in the region’s cities, especially the capital of Urumqi, where they make up 70% of the population.

Han moved into Xinjiang, in part to secure government control of the vast border region and to begin to exploit the region’s mineral resources, especially its energy resources. Xinjiang has China’s largest oil reserves, 40% of the nation’s coal reserves, and is already number one in natural gas production, generating a third of the country’s total output. Xinjiang is larger and economically more important to China than Tibet.

The Chinese government’s response to the turmoil in Xinjiang closely follows its approach to last spring’s unrest in Tibet. In addition to the security actions described above, it has launched major domestic and foreign propaganda efforts. The government asserts that it has restored calm and is providing medical care and financial support for victims. It blames the unrest on foreign-based forces who are aided by biased and false coverage by foreign news organizations.

Below are screenshots of government sites putting forward these views. All date from July 9, 2009. Click on the image to visit the website. 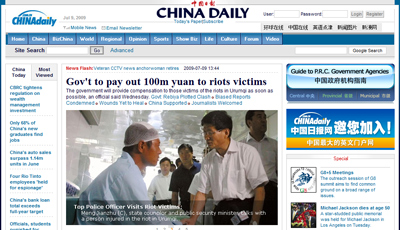 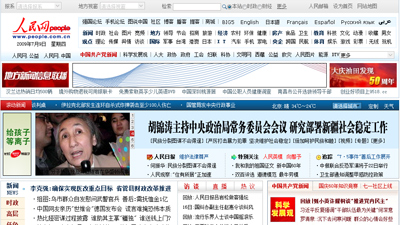 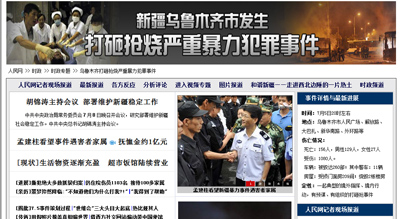 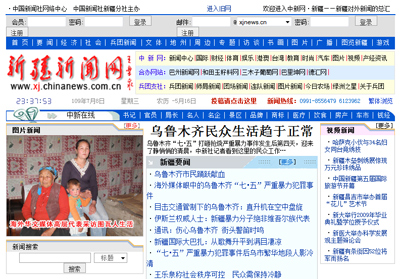 Precisely what happened on July 5 in Urumqi is not clear. China’s government says that “The separatist World Uygur Congress led by Rebiya Kadeer was behind the deadly July 5 Urumqi riot.” The Congress, it says, exploited a June 26th brawl between Uighur and Han factory workers in southern China to stir up ethnic hatred. According to the government, some Uighurs attacked and killed Han. According to the World Uygur Congress, Uighurs demonstrating peacefully were shot and run over by police. What is known is that ethnic violence ensued and spread to Kashgar and other cities in Xinjiang. The government has organized visits for foreign journalists to areas where rioting occurred. Xinjiang, unlike Tibet, is not closed to foreign visitors. No special permission is required to travel there and foreign journalists have been able to talk with a wider variety of residents. Even so, reporters acknowledge that the climate of fear and the quick spread of gruesome tales of atrocities, some perhaps accurate and others almost certainly exaggerated, is making it difficult to know the extent and nature of the battles, or even if they are continuing in other places.

Xinjiang shares a long border with Russia and other former Soviet republics. In some areas, it’s common for trucks to have signs in three languages: Chinese, Uighur, and Russian. This week, U.S. President Obama traveled to Moscow to meet Russian leaders to discuss efforts to reduce the two countries’ nuclear armaments, to stem the spread of such weapons, and trade and other concerns. Russian trade with China has expanded dramatically, increasing 18% last year. Russia ranks as China’s 8th largest trade partner, with two-way trade equal to about one-sixth of U.S.-China trade. It’s striking to remember that mutual worries about the Soviet Union encouraged President Richard Nixon and Chairman Mao Zedong to meet in 1972. The chart below allows for a quick comparison of the size, vitality, and nuclear weapons capacity of the three countries today.

UPDATES:
2010 Visiting scholar and historian of Xinjiang Prof. Yang Zhongdong on “Ethnic Conflicts” or “Social Riots”? How to Understand Ethnic Relations in Xinjiang.
2020 Talking Points Newsletter on Hope and Fear
Symposium on What's at Stake in Xinjiang
2021 Xinjiang and the Belt and Road Initiative

USC Life Trustee and U.S.-China Institute supporter Herb Klein traveled to Beijing with Nixon in 1972. A longtime Nixon advisor, Klein was the president’s communications director. After leaving Washington, Klein headed Metromedia and served as editor in chief of the Copley Newspapers. More recently, he published essays on product safety scandals in China and other issues and offered his thoughts in weekly San Diego television appearances. Herb Klein passed away this week. He was 91. We were honored to have him join us for the Herbert G. Klein Lectures featuring Stapleton Roy (former U.S. ambassador to China) in 2007 and Clark Randt (then U.S. ambassador to China) in 2008. A fuller remembrance of Klein and videos of the Klein lectures are available at the Institute website.

Thank you for reading Talking Points. We welcome your comments at uschina@usc.edu. Looking ahead, the Institute invites teachers to join us for a workshop on Islam in China on September 12, 2009. Get on the Teaching about Asia mailing list to learn more. Best wishes,
The USC U.S.-China Institute
http://china.usc.edu/
Support the Institute via the secure USC server: https://giveto.usc.edu/