This week's USC U.S.-China Institute newsletter focuses on sports diplomacy and Kissinger's secret to Beijing in July 1971. As always, Talking Points updates you on China-related events and exhibitions across North America.
July 22, 2011
Print

In April 1971, at the World Table Tennis Championships in Japan, Glenn Cowan, a member of the American team rushed to board a bus from the practice hall to the tournament. Missing the US bus, he boarded a bus carrying the Chinese team. None of the Chinese players said anything, but from the back of the bus, Zhuang Zedong, a three-time world champion, emerged with a smile and a gift for Cowan.

Was it by chance? Most Americans think that it was. Henry Kissinger doubted it. In his memoir White House Years (1979) he wrote, the Chinese had “firm instructions to befriend the Americans. One of the most remarkable gifts of the Chinese is to make the meticulously planned appear spontaneous.”

Zhuang Zedong, during a 2007 visit to USC, insisted that it hadn’t been planned. He said that the usual instructions for athletes was to be friendly towards everyone, except Americans. He noted that on his way up the bus aisle, teammates asked him what he was doing. Zhuang said that after pictures of him and Cowan appeared in Japanese papers, that the team head told him to focus on playing, not politics.

Regardless of whether or not the initial approach was calculated, there’s no question that the Chinese sports authorities were subsequently directed to invite the American team to visit China. That visit, including an audience with Premier Zhou Enlai, was a dramatic and public signal that Chinese leaders were interested in improving relations with the U.S. There was enormous public interest in the trip, though the American players – going straight to China from Japan – did not appreciate this until they left China.

Much has changed in China, in the U.S., and in the U.S.-China relationship over the past forty years. The ping pong players were among the few Americans able to visit China then. Today, more than 5,500 Americans go to China every day. The American journalists traveling with the team were among the first to gain access to China since 1949. Today there are about one hundred China-based staffers for American news organizations and Americans also have ready access to Chinese news sources. The communications revolution has made it possible for everyone with a phone to contribute text and images to the discussion.

None of the American or Chinese “ping pong diplomats,” nor any of the millions following them could have anticipated the deep economic ties that would develop. In 1971, no one could guess that Yum!, the company that owns KFC, Pizza Hut, and Taco Bell, would get more than 40% of its 2011 total profits from its 4,066 outlets in China and that those profits would be significantly greater than those from its 17,500 outlets in the U.S.

A week ago, the Richard Nixon Foundation hosted a 40th anniversary celebration of ping pong diplomacy. The many who attended got to see contests featuring several of the players who were a part of the 1971 effort. These included Liang Geliang and Zheng Huaiying of the Chinese team and George Braithwaite and Judy Hoarfrost of the American squad.

It’s worth noting that the U.S. wasn’t the only target of ping pong diplomacy. Having missed the

1971 was not the first time “ping pong” was used in reference to diplomacy with China. In 1901, Punch magazine ran the cartoon below: “’Ping Pong’; Or ‘A Game That He Does Understand’” featuring a man in traditional dress playing a match with a woman wearing a crown labeled “Europa.” This was after European nations (and the U.S. and Japan) had invaded China during the Boxer Rebellion. The net the two sides are playing over is labeled “diplomacy.” Of course, 1971 wasn’t the last time that ping pong was used as a metaphor for U.S.-China relations. In 2001, The Economist highlighted a three way game.

Many Americans believe ping pong diplomacy launched the U.S.-China opening. In fact, the invitation was a high profile move by the Chinese government in a process that had started much earlier. In 1965, Richard Nixon traveled to Taiwan. He met there with Arthur Hummel, Jr., then the second-ranking official at the U.S. embassy. Hummel told historian Nancy Tucker, that even with Chiang Kai-shek’s intelligence agents listening in, Nixon asserted that the Nationalists could never retake the mainland and that America had to improve relations with China.
By 1967, Nixon was back on the campaign trail and in Foreign Affairs magazine he asserted,

“Taking the long view, we simply cannot afford to leave China forever outside the family of nations, there to nurture its fantasies, cherish its hates and threaten its neighbors. There is no place on this small planet for a billion of its potentially most able people to live in angry isolation.”

Nixon’s focus on this didn’t diminish with his election. In notes jotted down during his first two days as president, he wrote, “We want contact ... [want] China—cooperative member of international community and member of Pacific community.” He ordered a review of existing policies toward China and brainstorming about alternatives. According to Nixon’s chief of staff H.R. Haldeman, National Security Advisor Henry Kissinger had doubts about how quickly relations could be improved. Told that Nixon expected to visit China during a second term, Haldeman says Kissinger said, “Fat chance.”

Before long, the U.S. was extending feelers to the Chinese authorities through contacts in Poland, France, Romania, and Pakistan. It was Pakistani President Yahya Khan who eventually became the key conduit and it was from Pakistan that Kissinger headed off on his secret mission to Beijing forty years ago this month. We have assembled documents relating to this remarkably successful initiative. For example, the transcripts of Kissinger’s exchanges with Zhou Enlai make for fascinating reading. Please click here to have a look.

Sports diplomacy and sports rivalries have continued. On the rivalry front, we noted in 2008 how American and Chinese news organizations differed in how they presented Olympic medal counts. But sports has definitely helped to bring people together and American sports businesses have certainly seen opportunities in China. The NBA was among the first in this regard. In 1979, the Washington Bullets (now called the Wizards) toured China. Large crowds turned out. Star and history buff Wes Unseld and his wife Connie seized the opportunity to explore a bit. They got up early to see people doing tai chi. Large crowds gathered and Polaroid prints were a spectacular hit. Not all the Americans were so curious and eager to learn. Team owner Abe Pollin was furious that at the Great Wall a couple of the players couldn’t be bothered to get off the bus.

One of the more memorable moments of that visit was in Beijing, where the Bayi (八一 Army) team included Mu Tieju, who was 7 foot 3 inches tall and weighed over 330 pounds. Mu was a giant and could make free throws, but lacked the mobility necessary to fully utilize his size and strength. That certainly was not the case with 7 foot 6 inch, 310 pound Yao Ming.

Yao announced his retirement from the NBA this week. A star from his rookie season in 2002-2003, Yao helped his team make it to the play-offs four times. He wasn’t the first Chinese in the NBA, but he was by far the best. Beyond his remarkable skills (he averaged 19 points and 9 rebounds a game), he was smart and funny. Asked about his progress in learning English, for example, Yao said, “I have learned to say ‘Next question?’” He shrugged off insensitive comments by others. He helped to make China the NBA’s second largest market. Annual revenues from game broadcasts, web advertising, and merchandise sales are estimated at $160 million. 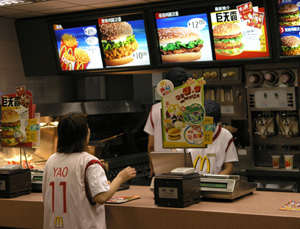 From the outset, Yao was a marketing juggernaut. In 2004, MacDonalds had his cardboard likeness in all their China outlets and dressed the staff in No. 11 jerseys. In the U.S. he made funny commercials for companies such as Apple, Visa, and T-Mobile and for both Pepsi and Coca Cola in China (the links are to YouTube or Youku versions of the commercials). Yao also helped the Red Cross raise funds to help the millions injured or left homeless by the 2008 Sichuan earthquake. He worked to raise environmental awareness, speaking out against consuming shark fin soup and combining with former Lakers star Magic Johnson to make a commercial to educate Chinese about AIDS.

Yao was well-rewarded, both as a player and marketer. He made $4-6 million each of his first four seasons and $12-18 million each of his last five years. His non-basketball income, however, dwarfed that. Forbes listed him as the top earning Chinese celebrity six years in a row. In 2009 he was said to have earned $51 million. That was the year he bought the Shanghai Sharks, the team he was playing for when the NBA came calling.

Because of injuries, Yao played little over the past two years. Kobe Bryant’s jersey has been the top seller in China. Kobe’s comments about leading a group of NBA players on a summer tour of China immediately generated a lot of attention. The NBA’s microblog on Sina.com’s Weibo started luring followers with calls to go see "Heimanba" 黑曼巴 (Black Mamba), Kobe’s nickname.

Thanks for reading Talking Points. Please pass it along to others and encourage them to subscribe. We love hearing from you. Please write to us at uschina@usc.edu and please consider supporting us with a tax deductible contribution.

08/01/2011 - 08/05/2011 and 08/08/2011 - 08/11/2011: USCI/NCTA 2011 Summer Residential Seminar
**Professional development opportunity for K-12 educators
University of Southern California, Los Angeles, CA 90089
The USC U.S. - China Institute (USCI) and the National Consortium for Teaching About Asia (NCTA) are offering a nine-day residential summer seminar for K-12 educators employed outside of the greater Los Angeles area.
Deadline for application accecptance is Friday, July 8, or until the seminar is full.

ends 07/31/2011: Echoes of the Past: The Buddhist Cave Temples of Xiangtangshan
Arthur M. Sackler Gallery of Art
1050 Independence Ave. SW, Washington, DC 20439
Smithsonian Institute presents an exhibition in which majestic sixth-century Chinese Buddhist sculpture is combined with 3D imaging technology in this exploration of one of the most important groups of Buddhist devotional sites in early medieval China.

Please invite others to subscribe to USCI’s free email newsletter for regular updates on events and programs. We will not share names or email addresses with any other entity. Click here to sign up.

You can support USCI by making a tax-deductible donation at http://www.usc.edu/giving/