Say Yes To The West: Globalization Of The Qipao

Chinese dresses like the qipao or cheongsam have become global fashion icons and proliferated into western clothing stores. The spread of these garments and the culture they represent begs certain questions about the authenticity of modern qipao and what it means to appreciate a culture rather than appropriate it.
August 18, 2021
Print 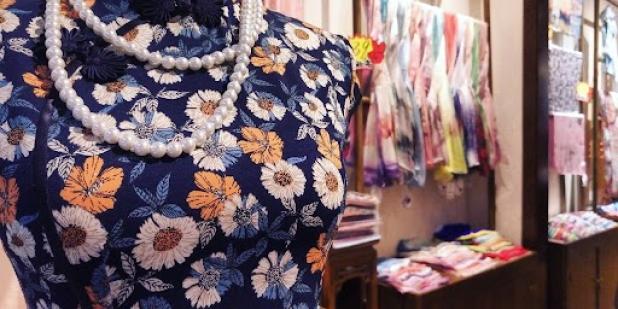 In the now-viral photo, Keziah Daum stands smiling with her date and friends on a white marble staircase before their prom celebration. Pre-dance photoshoots with a large group are incredibly common, but Daum’s pictures ignited a Twitter firestorm of controversy. Unlike her friend who opted to wear more traditional dresses, Daum was wearing a qipao, a traditional Chinese dress. In the comments of the post, Twitter users attacked her for perpetuating cultural appropriation, with one account proclaiming “My culture is NOT your goddamn prom dress”. In the same thread, however, journalists and other Chinese Americans came to Daum’s defense, defending her right to wear the dress. Daum herself maintains she did nothing wrong wearing the qipao and wore it to “[show] my appreciation to their culture”, leaving the question of cultural appropriation unsettled.

This viral incident is only one in a series of western women and brands co-opting traditional Chinese style elements. Chinese dresses like the qipao or cheongsam have become global fashion icons and proliferated into western clothing stores. The spread of these garments and the culture they represent begs certain questions about the authenticity of modern qipao and what it means to appreciate a culture rather than appropriate it. This distinction may be less clear-cut than some would like, especially as cultural elements like the qipao evolve.

Recently, Western fashion brands like Zara, Shein, PrettyLittleThings, Urban Outfitters and Reformation have marketed “jacquard” or “oriental” dresses, featuring elements of the traditional Chinese dress called the qipao or cheongsam. Many Asian Americans have expressed concerns of cultural appropriation and called for these companies to stop their production of such dresses. However, others disagree and do not see these pieces or foreigners wearing Chinese dresses as problematic. University of Southern California Roski School of Art and Design Professor Jenny Lin and Co-founder of East Meets Dress Vivian Chan offer their interpretations on these recent fashion trends in the broader context of global fashion and modernization trends.

When shown the Zara piece, Chan’s first reaction to the dress was “laziness.” While she found the dress to be objectively beautiful, Chan was concerned with the lack of cultural appreciation.

“I think a lot of these brands could have done their marketing and their branding much better in a way where it’s showing appreciation for the culture,” Chan says. “I don’t see any acknowledgment to Chinese culture.”

Instead, Chan suggests that these brands make a greater effort to recognize the inspiration for the dresses. For instance, the East Meets Dress cheongsams are all named after trailblazing Asian women and Asian American women: Gemma, Constance, Sandra, Mindy, Melinda, Amal, and so on. This simple acknowledgment elevates the East Meets Dress pieces and shows genuine thoughtfulness.

Professor Lin, who also found no issues with the piece itself, brought up the underlying core issue of fast fashion: labor. Fast fashion often exploits young women who were already vulnerable to work in dangerous conditions outside of the United States, where labor is the most plentiful and wages are lowest. This is directly at odds with traditional Chinese dressmaking, as the creation of a traditional qipao was a laborious and personal process. According to Professor Lin’s explanation, a personal tailor would come into the house, take careful measurements, and spend a great deal of time and effort into constructing the piece. When the dress was finished, the seamstress would “bestow it on the person with the expectation that they’ll wear it for the rest of their life and then maybe pass it down to generations to come.” The dedication and labor that went into traditional qipaos is a world away from the industrialized process that makes them today. 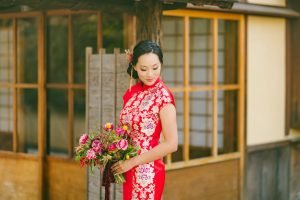 “It’s a very different relationship with the material than fast fashion,” Professor Lin says. “And one that I think we need to learn from and emulate more.” As such, Professor Lin sees the fast-fashion version of the qipao embodying a damaging dichotomy: it epitomizes the aesthetics of an item becoming global, cosmopolitan and luxurious while relying on the exploitation of unskilled labor and dangerous working conditions under which it was made.

While lack of acknowledgment and exploited labor are core issues with this new trend, Professor Lin and Chan found no issues with the design itself. As Professor Lin states, such designs are simply the definition of fashion: Designers deconstruct, play with, undo, mix, and mash together pieces to create fashion that is “always of the moment and this kind of fleeting, ephemeral style.” East Meets Dress’ pieces are a perfect example of this, taking the traditional qipao and recreating it with contemporary tastes in mind. As Chan described, traditional qipaos were a straight sheath and very form-fitting, which may not be the most flattering for many people today. Chan envisioned a more modern rendition that created the romantic and soft look one gets from white wedding dresses while retaining qipao elements, like the color, pankou knots, and trim. “We’re inspired by white wedding dresses,” Chan says. “We just want to be able to combine those elements with the traditional Chinese qipao elements to make a more modern version of a qipao.”

While East Meets Dress has created completely customizable dresses that marries Western trends and Eastern traditions, at one point does the new qipao no longer be recognizable as a qipao? Chan argues there is much flexibility.

Part of East Meets Dress’ mission is to educate others on the tradition and value of the qipao. Chan has written a blog post defining the five basic elements of traditional Chinese dress. One could argue that keeping the majority of these five elements suffices. For instance, some of Chan’s brides dislike the Mandarin collar because it feels too restrictive. Instead, these brides find other ways to incorporate their culture into their dresses, whether it be maintaining the red color or the traditional silk material.

Chan encourages us to keep an even more open mind: One of the East Meets Dress’ most popular dresses is the Asian-inspired Nora Peacock Wedding Dress that has a strapless neckline and features a huge embroidered peacock. “You might not call it a qipao because it does lack some of the traditional elements, but it’s still a Chinese-inspired dress,” Chan argues. “The peacock symbol is very prominent in Chinese weddings and cultures.” 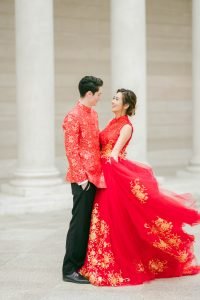 Thus, there is no definitive answer to this question, no doubt due in part to that fact that the Asian American community is still learning about itself. “I think part of our generation is that we’re also figuring out what we want Asian American culture to be,” Chan says. “So it’s a lot of combining different elements from both sides, and then reinventing our own.”

However, Professor Lin still cautions designers against going too far with inspiration. She brings up the 2015 Met Gala and the subsequent documentary The First Monday in May as an example. The theme was “China through the Looking Glass” celebrating Chinese influence on Western fashion fit for an emperor. As Professor Lin shares, Anna Wintour, Wong Kar Wai, and Andrew Bolton met with Chinese government officials to request a loan of China’s last Emperor Puyi’s of the Qing Dynasty robes to include in the exhibition.

Despite the 2015 Met Gala being one of the most popular events in the exhibition’s history, the response was not positive, particularly from Mainland China where viewers felt offended because it was almost entirely Western European and North American fashion designers that were appropriating cultural symbols and motifs from China. According to Professor Lin, many said “we just don’t understand why you’re only showing dragons and these old motifs that makes the viewer get a sense that China doesn’t have its own contemporary modern culture.”

The only answer they were offered was the exhibition was meant to be “the fantasy of China,” which brings up further issues of othering, orientalizing, even fetishizing Chinese and Chinese Americans. This attitude was reflected in some of the questionable outfits that evening.

While designers can be inspired by the Chinese culture and incorporate prominent Chinese symbols like peacocks and dragons, they must also truly understand the value of these symbols and their inspiration to not create “costume-y” pieces that ultimately misappropriate a country and its thousand-year-old history. “That would have been an excellent moment where they could have actually listened,” Lin says. “Maybe learn about contemporary fashion designers.” Instead, Western designers balked at this opportunity and chose to instead create a fantasy version of Chinese fashion for the Met Gala.

So how can one wear traditional or modern qipaos without accidentally misappropriating the Chinese culture? The 2018 Keziah Daum drama is a perfect example of this disconnect. While others criticized Daum, both Lin and Chan did not find Daum’s actions to be offensive. Chan was even critical of the backlash. “We want to feel like we’re welcoming people to understand our culture,” she says. “It doesn’t help when you’re kind of excluding everyone or being mean to everyone.”

Nonetheless, Lin and Chan still draw a line between appreciating and appropriating.

“Taking things without asking from other cultures, and especially if you’re doing it in a mocking or in an exoticizing or in an orientalizing way” creates the problem, Lin warns. Still, she is hopeful: “I think food is a really common example,” she says, “we can enjoy cuisines from around the world. Why can’t we do that with fashion?”

Chan’s brides exemplify the value of cultural appreciation. Some of her customers are engaged to someone with Chinese heritage, and the brides want to honor their fiances’ culture by wearing a qipao and participating in the traditional tea ceremony. “A lot of them actually come very scared because they’re like, ‘I don’t want to misappropriate or misrepresent your culture,’” Chan says. But as long as they are coming from a place of respect and sincerity, Chan and her co-founder are more than willing to educate and help them find the perfect dress and aesthetics. Their website includes a tab dedicated to teaching others the way of the Chinese qipao and tea ceremony, with blogs titled “Chinese Wedding Dress 101” and “The Ultimate Chinese Tea Ceremony Guide.” Resources like these can be helpful to those unsure about how the qipao can fit into their wedding celebration. “It’s nice to see that they’re trying to understand their fiances’ culture,” Chan compliments.

So how can we continue appreciating Chinese culture and fashion? Lin and Chan recommend having open dialogues to educate. As Lin cautions, if we simply punish the perpetrator, they become more likely to maintain their particular thoughts and beliefs. Instead, “we should have a conversation and respectful dialogue of the pros and cons,” Chan encourages. Lin echoes this sentiment: If we can establish a safe dialogue, we can start to understand one another better.

Most importantly, as Lin concludes, “there’s not one authentic, pure Chinese person that represents all of China and all of its history and all of its fashion that would be able to tell us who and who cannot wear the qipao.” Today, the qipao continues to evolve and change thanks to new conceptualizations of form and engagement with disparate audiences around the world, much like Chinese fashion as a whole.