Rob Schmitz creates an unforgettable portrait of individuals who hope, struggle, and grow along a single street cutting through the heart of China’s most exhilarating metropolis, Shanghai. 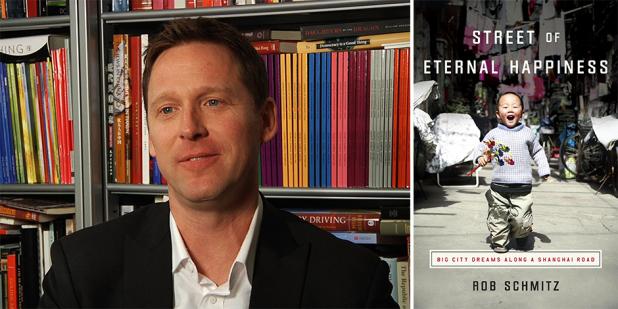 An unforgettable portrait of individuals who hope, struggle, and grow along a single street cutting through the heart of China’s most exhilarating metropolis, from one of the most acclaimed broadcast journalists reporting on China today.
Modern Shanghai: a global city in the midst of a renaissance, where dreamers arrive each day to partake in a mad torrent of capital, ideas, and opportunity. Marketplace’s Rob Schmitz is one of them. He immerses himself in his neighborhood, forging deep relationships with ordinary people who see in the city’s sleek skyline a brighter future, and a chance to rewrite their destinies. There’s Zhao, whose path from factory floor to shopkeeper is sidetracked by her desperate measures to ensure a better future for her sons. Down the street lives Auntie Fu, a fervent capitalist forever trying to improve herself with religion and get-rich-quick schemes while keeping her skeptical husband at bay. Up a flight of stairs, musician and café owner CK sets up shop to attract young dreamers like himself, but learns he’s searching for something more. As Schmitz becomes more involved in their lives, he makes surprising discoveries which untangle the complexities of modern China: A mysterious box of letters that serve as a portal to a family’s – and country’s – dark past, and an abandoned neighborhood where fates have been violently altered by unchecked power and greed.
A tale of 21st century China, Street of Eternal Happiness profiles China’s distinct generations through multifaceted characters who illuminate an enlightening, humorous, and at times heartrending journey along the winding road to the Chinese Dream. Each story adds another layer of humanity and texture to modern China, a tapestry also woven with Schmitz’s insight as a foreign correspondent. The result is an intimate and surprising portrait that dispenses with the tired stereotypes of a country we think we know, immersing us instead in the vivid stories of the people who make up one of the world’s most captivating cities.

Rob Schmitz is Marketplace’s China correspondent, based in Shanghai. Rob has won several awards for his reporting on China, including two national Edward R. Murrow awards and an Education Writers Association award. His work was also a finalist for the 2012 Investigative Reporters and Editors Award. His reporting in Japan — from the hardest-hit areas near the failing Fukushima nuclear power plant following the earthquake and tsunami — was included in the publication 100 Great Stories, celebrating the centennial of Columbia University’s Journalism School. In 2012, Rob exposed the fabrications in Mike Daisey’s account of Apple’s supply chain on This American Life. His report was featured in the show’s “Retraction” episode, the most downloaded episode in the program’s 16-year history.
Prior to joining Marketplace, Rob was the Los Angeles bureau chief for KQED’s The California Report. He’s also worked as the Orange County reporter for KPCC, and as a reporter for MPR, covering rural Minnesota. Prior to his radio career, Rob lived and worked in China; first as a teacher in the Peace Corps, then as a freelance print and video journalist. His television documentaries about China have appeared on The Learning Channel and the Canadian Broadcasting Corporation.
Rob has a master’s degree from Columbia University’s Graduate School of Journalism and a bachelor’s degree in Spanish from the University of Minnesota-Duluth. He speaks Spanish and Mandarin Chinese. He’s lived in Spain, Australia, and China. A native of Elk River, Minn., Rob currently resides in Shanghai, a city that’s far enough away from his hometown to avoid having to watch his favorite football team, the Minnesota Vikings. Sometimes, he says, that’s a good thing.
Click here for the full list of book interviews.