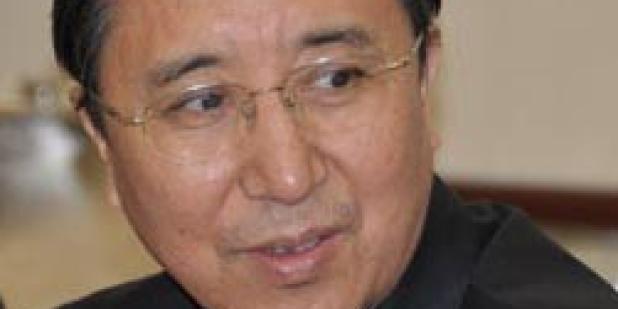 For other articles and documents on Tibet, click here.

China’s government will never permit Tibet to become independent and is unwilling to negotiate Tibet’s future with the Dalai Lama or anyone else outside the country. This was the central message conveyed to a USC U.S.-China Institute audience on December 4 by Sita (斯塔), Vice Minister of China’s Central United Front Department and Vice President of the China Overseas Friendship Association. Sita headed a seven-member delegation of officials and scholars. They were accompanied by representatives from China’s embassy in Washington and its consulates in San Francisco and Los Angeles.
Chinese policies toward Tibet are prominent in the international press. This past March civil unrest in Tibet ended with riots in Lhasa where


non-Tibetans were targeted and many were killed. A military crackdown ensued. Critics of China’s policies in Tibet used the Olympic torch relay stops in Europe and America to demonstrate, prompting counter-demonstrations in China. Beijing authorities blamed the unrest on the “Dalai clique” and said that many foreign critics were simply faking concern for Tibetans in order to bash China. For his part, the Dalai Lama insisted he was not seeking Tibetan independence and expressed support for the Beijing Olympics. He called for an end to violent protest and repression.

In late October and early November, Chinese government representatives met with envoys of the Dalai Lama. Both sides said the talks yielded no progress, with each side complaining the other was unprepared to yield on basic issues. Elements within the Tibetan exile community called for a harder line against Beijing, but at a late November meeting in India, participants endorsed the Dalai Lama’s “middle way” approach, seeking autonomy rather than independence.

Vice Minister Sita (斯塔) was among the Chinese government representatives meeting with the Dalai Lama’s aides. A Tibetan who worked as a teacher and village official in the autonomous region, Sita eventually went to Beijing for college and was later recruited into central government service. He is 54 and has served in China’s embassy in India and a consulate in Switzerland. Sita opened his presentation affirming five points about Tibet. The first is the government’s position that Tibet is an inalienable part of China, noting that the country has exercised effective sovereignty over the region since the Yuan dynasty (the Mongol dynasty, 1279-1368). The Vice Minister’s second point is that as an Autonomous Region, Tibet already enjoys greater self-rule than ordinary provinces. Tibetans, he said, control critical decisions. Tibetans and other Chinese citizens, Sita said in making his third point, enjoy religious freedom. Religion, he insisted, is flourishing. Tibet currently has 1,787 active monasteries, with roughly 42,000 practicing monks. Sita stressed that there is by law, and in reality, a separation of religion and government. His fourth point was that Tibet has enjoyed great economic progress in recent years and that this will be accelerated thanks to government plans to invest US $22 billion in the region by 2010.

The Vice Minister’s final topic was the central government’s evolving relationship with the Dalai Lama. Sita argued that during the Qing dynasty (the Manchu dynasty,1644-1911), Beijing granted the Dalai Lama political leadership of the region. The current Dalai Lama is the 14th and is now 73. He was 15 when Chinese troops moved into Tibet in 1951. Sita insisted the Dalai Lama was a partner in ruling Tibet, but was unwilling to accept true reform following the 1949 revolution. He fled China in 1959 to establish his “so-called government and engage in separatist activities.”

Sita said China’s policy towards the Dalai Lama has remained consistent. Deng Xiaoping, for example, acceded to the Dalai Lama’s 1978 request to resume discussions. According to Sita, though, in 1991, the Dalai Lama, inspired by the break-up of the Soviet Union, abruptly cut off contact. Sita said the Dalai Lama expected China to similarly dissolve.  China did not break up, but rather accelerated its economic reforms and moved forward. Sita said the Dalai Lama sought to restart talks in 2002 because of the country’s progress.
Following Sita’s brief presentation, he and the delegation spent the next seventy minutes responding to questions from the audience. They were asked that while the Dalai Lama has repeatedly stated he seeks autonomy rather than independence for Tibet, why does the Chinese government accuse him of insincerity and is unwilling to really engage in discussions? Sita responded by listing the demands made by the Dalai Lama’s representatives, arguing they included the removal of PRC troops in Tibet and other measures that were essentially moves towards “covert independence.” Sita repeatedly insisted that China’s territorial integrity would be preserved at all costs. In response to subsequent questions, Sita insisted that the Dalai Lama has no standing to negotiate on behalf of Tibetans. He forfeited that, Sita said, when he abandoned Tibet in 1959. The Dalai Lama is welcome to return to China, and the Beijing government will happily discuss this with him. The Chinese government is “not waiting for the Dalai Lama to die,” Sita said. No entity outside Tibet can represent Tibetans, he said. Asked to account for the Dalai Lama’s popularity outside China, Sita argued that the Dalai Lama’s prominence was the product of anti-China maneuvering by the U.S. Central Intelligence Agency in the 1950s and again in the late 1980s.

The discussion turned to economic conditions within Tibet when an audience member asked if the disparity between rich and poor had an ethnic component, which may help explain tensions there. Luorong Zhandui (罗绒战堆), a researcher with the Chinese Center for Tibetan Studies, said that while a large disparity in incomes does exist, it is not an ethnic issue but rather a divide between urban and rural populations. The disparity is large, Luorong conceded, with urbanites averaging 3.8 times the income of rural residents, but this gap has shrunk thanks to economic reforms and central government investments in the region. At the start of the decade, he said, the gap was still larger with rural residents averaging just one-fifth the income of urban dwellers. Luorang argued that because of its greater poverty and isolation, the central government has had to invest more in Tibet than elsewhere. In Tibet, the plan has been to develop the infrastructure of the regions major cities, and allow them to become development engines for the greater area. Luorong explained that most projects give hiring preference to Tibetan herdsmen and  farmers. He said that sometimes these people lacked the education or work habits needed, but were still paid anyway. Lamu (拉姆), chair of the Chinese Tibetan Political Consultative Conference for Nagqu Prefecture and one of two women in the delegation, also highlighted the economic expansion the province has undergone since 1950. She noted that while 900,000 farmers lacked proper housing when the army arrived in 1951, virtually all now have spacious and adequate housing facilities.

The delegation was similarly upbeat regarding the freedom of Tibetans to follow their religious beliefs. Sita and others noted that Tibetan Buddhism was distinct from that observed by other sects within China. He argued that tolerating the faith’s practice of seeking to identify reincarnated leaders was a significant concession to local norms.
If the economy is good and getting better and religious freedom protected, one audience member asked, why then does there continue to be unrest in Tibet? Sita was clear and firm in his response. The problem was entirely caused by outside agitation. He argued that other minority areas such as Guangxi and Ningxia were at peace. Tibet was not, he said, because of the interference of the Dalai clique which had encouraged numerous violent incidents in 2008 alone.
The Vice Minister said that at various times the U.S. government had not supported the Dalai Lama, citing the period between 1972 and 1978, and he hoped that Americans would not encourage separatist activities. Sita urged members of the audience to visit and see Tibet for themselves, insisting that the close friendship of the Chinese and American peoples should not be tarnished by the interference of others.
In addition to Sita, Luogong and Lamu, the Chinese government delegation included Gao Fengying (高凤英), Deputy Division Head of the China Overseas Friendship Association, and Association members Lin Jian (林建) and Li Xia (李夏). Zhang Chao (张超) served as the group’s interpreter.
Several of the twenty faculty and students who met with the delegation noted that, given the clear position of the government against even talking with the Dalai Lama about Tibet’s future, there seemed little prospect that tensions in the region can be calmed in the near term. Hearing directly from such influential officials and scholars on the issue is quite welcome, especially as it helps clarify how energetically the government intends to pursue these policies and how hard it is working to convey its views abroad.

Peter Winter is a USC graduate student in public diplomacy and is deputy managing editor of US-China Today.

Other articles and documents on Tibet:

Fifty Years of Democratic Reform in Tibet | Kolas, Tourism and Tibetan Culture in Transition: A Place Called Shangrila | PRC Officials Discuss Tibet Situation with USC Scholars and Students | Memorandum on Genuine Autonomy | Testimony on ‘The Crisis in Tibet: Finding a Path to Peace | Tibet: Problems, Prospects, and U.S. Policy | The Way to Resolve the Tibet Issue | President Obama Meets with the Dalai Lama | On the 'Memorandum' of the Dalai clique | Beijing-Based G-5 Chiefs of Mission on DPRK, GTMO, Uighurs, Sino-Japan Relations, Dalai Lama |