The popularity of Chinese food in America 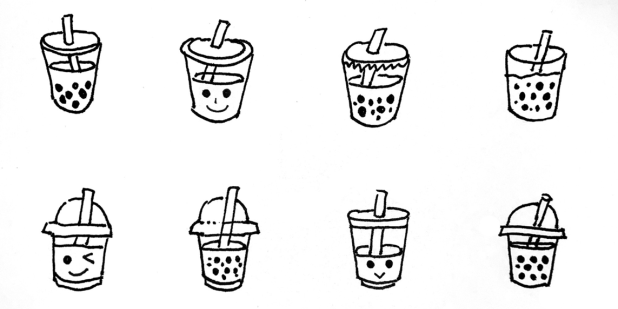 When Americans set foot in China in 1784, they described the food as "the repose of putrefied garlic upon a much-used blanket." While it took another century for the food in New York City's Chinatown to start becoming popular, interest exploded when Americans saw President Nixon eating Peking duck on his 1972 trip to China. People wanted to taste "authentic" Chinese food.

The popularity of Chinese food only continued to grow: in 2015, General Tso's Chicken was the 4th most popular food ordered on GrubHub in the US. That same year, designer Yiying Lu submitted designs for new emojis to the Unicode Consortium, the non-profit that controls the icons on your keyboard. They added her illustrations of a dumpling, Chinese takeout box, fortune cookie, and chopsticks. Her emoji for boba, however, was rejected.

A few years later, Lu and a team of researchers submitted a second proposal for a boba emoji. In addition to the history of the Taiwanese drink, they included research on its growing popularity, such as the expected growth of the global bubble tea market to hit $3 billion by 2023. The proposal was accepted and the new boba emoji will be on your phone later this year.

More about Chinese food in America: