A new USCI documentary looking at the U.S. strategic shift to the Asia-Pacific region. 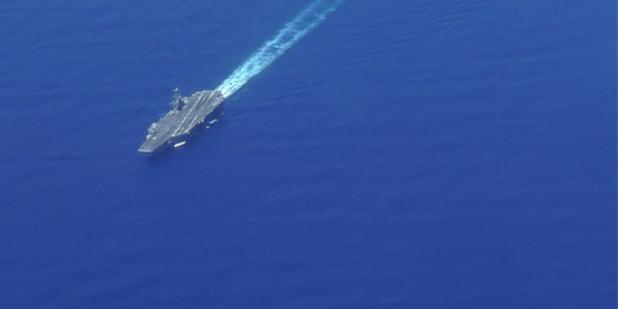 Barack Obama took office describing himself as America’s first “Pacific President, and, as the wars in Iraq and Afghanistan wound down, his administration made Asia a top priority for U.S. foreign policy. The move has been dubbed “The Pivot,” and it has the potential to be one of the most enduring legacies of the Obama presidency.

With three key elements - diplomatic, economic, and military- the Pivot, or “rebalancing,” as administration officials now prefer to call it, is designed to bolster the U.S. position in the Asia-Pacific and enhance ties with key friends and allies. It has produced a flurry of high-level U.S. visits to the region - most notably the president'f first foreign trip since winning re-election, to Cambodia, Burma, and Thailand - a new trade initiative called the Trans-Pacific Partnership, and, most controversially, a series of moves to strengthen the American military posture.

Administration officials insist that the Pivot is not directed at China. But the policy took on added urgency and much greater visibility in the past two years, against the backdrop of a series of increasingly assertive Chinese foreign policy moves. Meanwhile, many in Beijing have complained that the policy is actually designed to contain and block the rise of China.

In a complex, volatile, and hugely important region, the Pivot is in fact a complex and still-evolving policy. This 22-minute film is based on interviews with leading officials, diplomats, and analysts, including Assistant Secretary of State Kurt Campbell, former U.S. Ambassador to China Stapleton Roy, former National Security Council Asia experts Jeffrey Bader and Kenneth Lieberthal, Chinese diplomat Jia Xiudong and others, as well as on-the-ground reporting. It offers a fascinating and detailed look at the Pivot and its implications for U.S. relations with Asia now- and in the future.

The Pivot is available in High Definition on the USCI YouTube Channel.

Center for Strategic and International Studies briefing on the Pivot, Aug. 2, 2012

Sec. Clinton spoke to the American Chamber of Commerce. Her remarks included, “We are very committed to this relationship between the United States and Vietnam, just as we are to the reenergizing of America’s relationship throughout the Asia Pacific. It’s one of the top priorities of the Obama Administration. The United States is, after all, an enduring Pacific power with Pacific interests, and we intend to be a presence in the Pacific region for the foreseeable future.”

The authors note, “The initial responses to America's new defense strategy illustrate that the current environment in China tolerates debate over Beijing's foreign policy challenges. The nuanced nature of some of the comments appears to reflect an evolving understanding of the regional security environment. Although U.S. statements and actions may have exacerbated Chinese concerns about “containment,” they also appear to have motivated Beijing to moderate its approach to dealing with its neighbors. Furthermore, Beijing clearly recognizes the importance of a constructive U.S.-China relationship, particularly given its desire to ensure a stable environment for the upcoming leadership transition that will have unprecedented turnover in the senior-most ranks.”

Sec. Clinton noted, “I participated in the annual U.S.-ASEAN post-ministerial meeting where we discussed my country’s deepening engagement with Southeast Asia and the opportunities we see ahead on so many fronts – from expanded trade investment, to greater cooperation on peace and security, to joint efforts to confront transnational challenges, like climate change, human trafficking, nuclear proliferation, and so much else.”

U.S. Department of Defense, “Military and Security Developments involving the People’s Republic of China 2012,” May 18, 2012