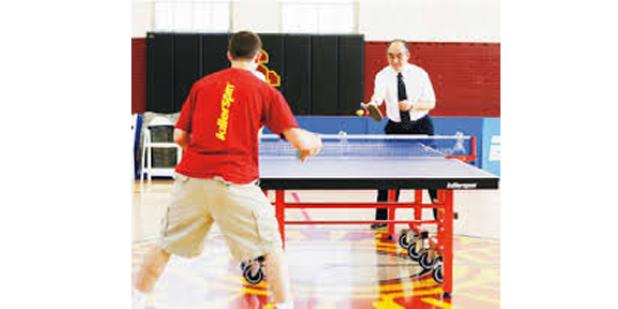 This article was originally published by the Daily Trojan on September 26, 2007.

Zhuang Zedong spoke through an interpreter to students, faculty and ping-pong  enthusiasts at an event sponsored by  the USC U.S.-China Institute, Confucius Institute of UCLA and Ping-Pong Posse, a student organization.

The famous Chinese athlete, now 67,also challenged audience members to beat him in a game of table tennis.

"Everybody in China knows him," said Clayton Dube, director of the USC U.S.-China Institute, who gave the event's opening remarks. "He's a national hero."

Zhuang, who now coaches top ping-pong players in China, including several USC students, captured the audience's attention as he explained his part in restoring diplomacy between China and the United States during the 1970s.

Zhuang explained that he broke the icy tensions that had developed between the two countries during the Cold War with a simple act: He broke taboo and spoke to American ping-pong player Glenn Cowan, who had hastily boarded a bus full of Chinese players after he missed his own bus. Instead of ignoring Cowan like his teammates, Zedong said he spoke with the American player and exchanged gifts with him as a sign of friendship.

The two players' amiability opened the door to renewed diplomatic relations between the two countries, which had virtually no political ties for 22 years.

"He has a very poetic way of speaking… His style of storytelling is just really entertaining," said Jason Sun, a USC graduate and former Ping Pong Posse member.

Zhuang is among only a handful of sports figures - including Jackie Robinson, Muhammad Ali and, recently,Yao Ming - to establish a reputation both as an athlete and as a political figure in the last century, political experts said.

"Some athletes really want to make a difference in their society, and some athletes are willing to risk personal loss to do that," said Jeff Fellenzer, an Annenberg adjunct professor who taught Sports, Business and Media in Today's Society in Spring 2007.

Fellenzer compared Zhuang with Muhammad Ali. Despite their sports fame, both Ali and Zedong suffered from political backlash in their home countries - Zedong was exiled from Bejing after Mao's regime collapsed, but eventually regained recognition from political leaders.

According to USC adjunct professor of political science and former Los Angeles city council member Michael Woo, politicians are viewed as less credible than sports figures to the public."There's a natural tendency to discount politicians. Athletes or other celebrities who are not viewed by the public as having an agenda or an axe to grind may have more credibility," Woo said.

But Woo warned that there is a danger in celebrities and sports figures promoting initiatives that are not "good for the public."

Some students who attended the event, especially those from China, recognized Zedong played a role in formulating modern-day U.S.-China relations.

Ben Liang, a senior majoring in business administration, said Zhuang has contributed to China's status as a global player.

"I definitely thank him for establishing that relationship," Liang said.