Pangolins And A Pandemic: The Evolving Chinese Wildlife Trade

This article offers a look at China's lucrative wildlife trafficking industry and how the pandemic is driving demand.
August 18, 2021
Print 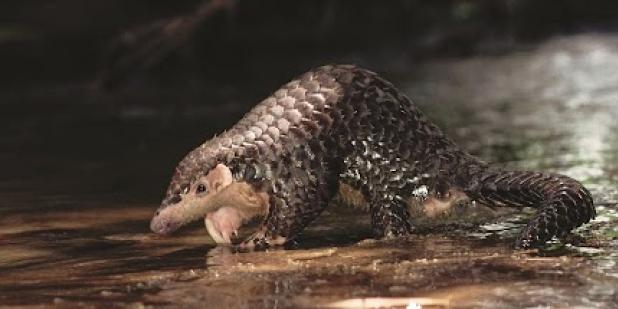 Ask the average American what’s behind the COVID-19 pandemic and you’ll probably hear range of rather pedestrian answers that do not include the word “pangolins,” and certainly have nothing to do with the illegal wildlife trade. But answers like those overlook a shockingly pervasive reality which the COVID-19 pandemic has thrown into stark relief. That reality? China’s incredibly lucrative wildlife trafficking industry.

What, though, is the illegal wildlife trade? Roughly defined, it is any traffic in live animals or wildlife products derived from species that are protected from such use by law. Though global environmental policies like CITES (the Convention on International Trade in Endangered Species of Wild Flora and Fauna) have attempted to halt this ecologically-devastating exploitation of wildlife, the trade continues to flourish. According to China Biodiversity Conservation and Green Development Foundation Zhou Jinfeng, the scope of this trade in China is vast.

“We do not have official numbers for this [the wildlife trade in China], but it is big. Take pangolin scales as an example,” Zhou says. It’s an apt choice: the pangolin, a scaled mammal closely related to the anteater, is the most trafficked mammal in the world, and China is at the center of the demand for pangolin products. “All eight species of pangolin are [protected under the] CITES convention, but each year the number of pangolin scales [confiscated] represent[s] nearly 100,000 pangolins killed in the wild.” That doesn’t even count the pangolins which are successfully trafficked and thus never accounted for.

Grace Ge Gabriel, Asia regional director of the International Fund for Animal Welfare, was careful to point out that “wildlife trafficking is a global issue by definition – it’s not a one-country problem,” but corroborated Zhou’s words about the scale of the demand for wildlife products in China. So why is China’s market for wildlife products so large?

As the case of the pangolin goes to show, much of that demand is related to the use of wildlife products in traditional Chinese medicine. True to that observation, pangolin scales are a component of some traditional medicines. But, as Gabriel pointed out, modern Chinese culture drives up demand almost as much as ancient Chinese traditions do.

“Because of the rising middle class … some people want … wildlife parts and products to define status and wealth,” Gabriel says.

Pangolin meat, for example, is a coveted delicacy among those with the money to partake in it. Its high price tag makes the meat a status symbol. Such social and cultural drivers of the demand for wildlife products can be difficult to change, but experts agree on the need for legislation and policy, which can do much to curtail demand..

“Awareness [is] good, but we need policy support to stop the criminals who are making profit off of illegal [wildlife products – in that case, ivory],” says Gabriel. Both awareness of the ecological harm caused by the use of wildlife products, and policy changes which reflect a desire to put an end to that ecological harm, are necessary to make lasting headway on efforts to save China’s species.

Illegal wildlife trade is not a new issue – Gabriel spoke at length about a very successful campaign to raise awareness about the illegal ivory trade in China in the late 2000s. And the issue has recently gotten the boost it needed from an unlikely source: the COVID-19 pandemic.

Before the outbreak of the COVID-19 pandemic, it was clear that China’s wildlife trade poses environmental dangers, “reduc[ing] wildlife populations, threaten[ing] their survival in the wild, [and] disrupt[ing] the ecological functions they perform in the ecosystem as well as affect the network of species they interact with,” according to Dr. Janice Sur Hey Lee.

But it is becoming pressingly obvious that the widespread trade in wildlife products has alarming implications for public health, too.

“The movement of wildlife from natural habitats to cities means that people come into close proximity to these wildlife species and there is a risk of zoonotic diseases crossing over to humans,”  Lee says.

Zoonotic diseases – ones which enter the human population through contact with animals – have always been a danger. According to the Centers for Disease Control, six out of every ten human diseases is zoonotic, and examples include devastating epidemic illnesses like malaria and the bubonic plague. And now that the global wildlife trade is moving both live animals and animal products into human spaces with such frequency, it seems logical that the risk of such diseases entering the population would increase. The COVID-19 pandemic provides a near-perfect example of just how devastating such leaps from animal to human populations can be.

Though it will probably never be possible to pinpoint the precise origin of the COVID-19 virus, scientists strongly believe that it got its start in a Wuhan meat market where wildlife products were sold. Operating under few animal welfare or public health regulations, that market sold an extensive array of animal products – both legal and illegal – without many measures in place to ensure that the products for sale were safe to consume. It is suspected that the COVID-19 virus entered the human population from either bats or pangolins which were sold at that market. That one of the most likely hosts also happens to be the most trafficked mammal in the world – there go the pangolins again – speaks volumes about the role that the illegal wildlife trade might’ve played in the greatest global crisis of the moment. It would be difficult to find a more compelling reason than that for China to tackle its extensive wildlife trafficking issues, and that is indeed what they’ve done.

In May 2020, only a few months after the outbreak of the pandemic, the Chinese government banned the consumption of wildlife products, and that ban (though, as Dr. Lee noted, there are exceptions) has since led to an increase in the robustness of China’s wildlife protection policies in general.

“Last month, the gov[ernment] revised an addendum to the wildlife protection law, listing animals that need protection – they call it “class 1” or “class 2” protection. It hasn’t been revised for 30 years, and this revision of the list included so many more species [that hadn’t been there before],” Ms. Ge Gabriel noted.

Zhou Jinfeng, Secretary-General of the China Biodiversity Conservation and Green Development Foundation (CBCGDF), an environmental NGO, also spoke about the revisions to China’s endangered species list, noting that pangolins had finally been upgraded to Class 1 – the highest-priority protective status a species can have under Chinese law.

Lee, whose work focused specifically on wildlife farms in China, believes that the measure has been successful at least in part because a recent WHO investigation showed that “wildlife farms are still closed,” noting that “the top-down nature of governance in China helps to ensure that this ban is enforced and implemented across China.”

Zhou also pointed out the Chinese government’s willingness to act on the need for better legislation in this area. At the beginning of 2020, right as the pandemic was beginning to spread, his NGO “took that opportunity to urge authority to [create] new policy and regulation,” and “got positive feedback within two weeks – the foreign ministry issued the new policy to ban wildlife eating.” Clearly, then, things are looking up for the long quest to end the unlawful use and trafficking of wildlife in China.

What still remains to be done?

According to Ms. Ge Gabriel, the first step is to take a broader view of unlawful wildlife use than the one taken by the recent consumption ban.

“Other types of animal use … could also put us into close encounters with wild species that carry viruses we don’t have immunity for,” Gabriel  explained, specifically pointing out the use of wildlife products for clothing and medicine. Her argument is that the wildlife trade can’t be curtailed by a ban with a focus as narrow as the one in place now, and legislation needs to be changed to cover a broader swath of issues. The global nature of wildlife trafficking presents possible paths forwards as well: wildlife issues transcend borders, and Ms. Ge Gabriel also stressed how vital it is that countries cooperate in their attempts to get a handle on wildlife trafficking worldwide. This is especially true given the prevalence of the internet in illegal wildlife-trading activities.

Lee, on the other hand, advocates for a more holistic approach. “We need to protect forests, reduce meat consumption, stem out the illegal wildlife trade, and manage the [legal] trade in wildlife in a way that does endanger their populations or the communities that rely on it,” Lee says.

Their shared stance, though, is clear: China’s recent efforts to address this issue have been good steps in the right direction, but they’re not nearly enough.

In light of that information, another pressing question inevitably emerges: will China take the devastating potential consequences of the wildlife trade, as shown by the outbreak of the COVID-19 pandemic, as seriously as they should? That remains unclear. This is not the first widespread outbreak of disease originating from the wildlife trade, though it is the largest in recent years, and in the past, such outbreaks haven’t even come close to stopping the trade. Lee, Zhou and Ge Gabriel all mentioned the 2010-2011 SARS epidemic, which was suspected to have originated in pangolins as well, as an example of the short-lived efforts that the Chinese government has made to curtail the wildlife trade after past outbreaks of disease.

Though experts are hopeful that the scale of this crisis will be enough to ensure that the bans aimed at preventing another such event will stick, it remains to be seen whether this will finally give China the push it needs to create a better future for its wildlife. Zhou believes that the key to ensuring that it does lies not in policy or enforcement, but in the people of China

“We believe that people’s participation is very important,” Zhou says. “We are trying to motivate as many as possible volunteers to participate, to watch out, to report illegal activities. We think that is the number one way to get improvements.”

Here’s hoping that Dr. Zhou is right, and that harnessing the power of the people – and the pandemic – will be enough to turn the tide for China’s wildlife.