Michael Meyer Discusses "In Manchuria: A Village Called Wasteland and the Transformation of Rural China"

Michael Meyer talks to USCI about his new book "In Manchuria," which presents unique profile of China's legendary northeast territory. 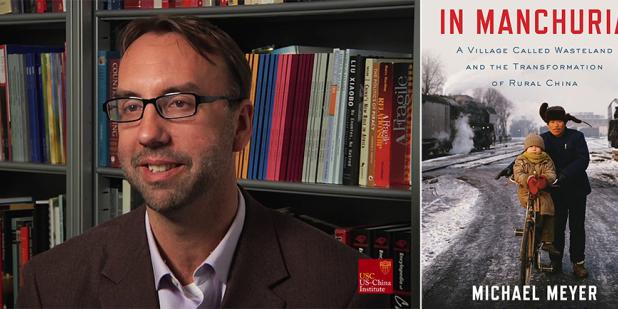 In the tradition of In Patagonia and Great Plains, Michael Meyer's In Manchuria is a scintillating combination of memoir, contemporary reporting, and historical research, presenting a unique profile of China's legendary northeast territory. For three years, Meyer rented a home in the rice-farming community of Wasteland, hometown to his wife's family, and their personal saga mirrors the tremendous change most of rural China is undergoing, in the form of a privately held rice company that has built new roads, introduced organic farming, and constructed high-rise apartments into which farmers can move in exchange for their land rights. Once a commune, Wasteland is now a company town, a phenomenon happening across China that Meyer documents for the first time; indeed, not since Pearl Buck wrote The Good Earth has anyone brought rural China to life as Meyer has here.

Amplifying the story of family and Wasteland, Meyer takes us on a journey across Manchuria's past, a history that explains much about contemporary China-from the fall of the last emperor to Japanese occupation and Communist victory. Through vivid local characters, Meyer illuminates the remnants of the imperial Willow Palisade, Russian and Japanese colonial cities and railways, and the POW camp into which a young American sergeant parachuted to free survivors of the Bataan Death March. In Manchuria is a rich and original chronicle of contemporary China and its people.

Michael Meyer first went to China in 1995 with the Peace Corps. The Last Days of Old Beijing: Life in the Vanishing Backstreets of a City Transformed resulted in a Whiting Writers’ Award for nonfiction, as well as a Guggenheim Fellowship. Meyer has also received a Lowell Thomas Award for excellence in travel writing. His stories have appeared in the New York Times, Time, Smithsonian, Sports Illustrated, Slate, the Financial Times, the Los Angeles Times, the Chicago Tribune and on This American Life. Meyer is an Assistant Professor of English at the University of Pittsburgh, where he teaches nonfiction writing.

Michael Meyer Discusses "The Last Days of Old Beijing: Life in the Vanishing Backstreets of a City Transformed"