Mary E. Gallagher: The Rule of Law in China

Scholar draws on extensive fieldwork in assessing how Chinese are responding to the government's efforts to expand the role of the courts in resolving disputes. 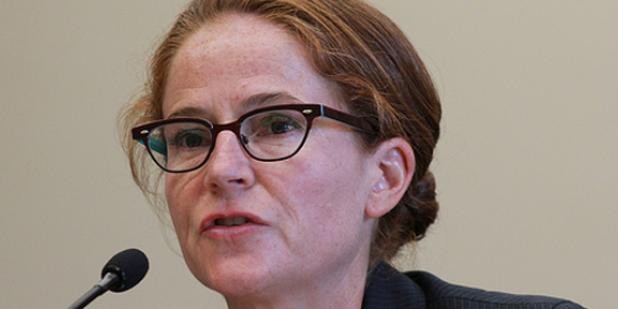 Speaking at USC on January 31, 2008, Mary Gallagher explained that as the Chinese government reforms its socialist legal system, it can simultaneously avoid making more fundamental changes to the political structure of the country. Gallagher argues that the new legal procedures are changing the attitudes of Chinese citizens, reshaping the way they view their rights and approach legal matters. According to her research, while younger workers embrace the formalities of legal procedure, older socialist-era workers may be floundering with the concept.

Particularly pertinent to Gallagher’s research is Chinese labor law, which has undergone extensive reform within the past two decades, most significantly with the passing of the “National Labor Law” in 1995. China’s National Labor Law is the foundation of the country’s current worker’s rights laws, protecting the basic rights of all workers within China, regardless of nationality, ethnicity, or other circumstantial differences.

Perhaps equally significant, the law does not differentiate between private or public enterprises in its application. According to Professor Gallagher, the passing of this legislation by China represents the “state’s abdication as the administrator of employment, much as it has withdrawn from formerly key duties…in other areas of China’s economy and society.” This new legal system contrasts with the more dated, socialist system, in which citizens often petitioned directly to government agencies in hopes that the agency would take legal action.

China’s 2008 “Labor Contract Law” mandates that all workers must be employed on the basis of a written contract which would determine wages and indicate under what conditions employees could be fired. Prior to the new law, approximately 40 percent of workers employed in private enterprises had no contract at all.

But the government may have ulterior motives for making changes to the legal system. Gallagher suggested that the changes are “not a precursor to further political change, but a way to reduce demand for more fundamental change – like competitive parties and elections.” Indeed, the current legal system prevents large-scale social movements like strikes, protests, and independent labor unions. Gallagher pointed to these limitations in the legal system as an indication that the state has perhaps an even more effective governance over its people.

As Professor Gallagher explained, the Chinese government encourages its citizens to engage themselves in the legal system to settle their civil disputes. Endorsement campaigns often urge citizens to “use the law as a weapon” to protect their rights.

In addition to the state’s endorsement and educational programs to help familiarize Chinese citizens with the new labor law, free legal aid fairs are often held in China, offering to help strained workers in their legal battles against employers. As part of her research on Chinese labor laws, Professor Gallagher conducted case by case analyses of several attendees at a legal aid center in 2003, attempting to understand the attitudes of the Chinese working class, their knowledge of worker’s rights, and their past interaction with the legal system. Gallagher also sought to determine what types of people were interested in using the Chinese legal system as a venue to resolve their disputes.

Two cases in Gallagher’s research, though both had ultimately lost their legal disputes, caught her attention because of the sharp contrasts between them. One case involved a fifty-five year-old man, Mr. Zhang, who had been laid off of his job one year before retirement. As compensation for the loss of his pension and retirement security, Zhang’s company offered him 10000 RMB (approximately $1400 dollars) in severance pay, which he accepted. Later, when he decided to sue his company for reinstatement and a chance at a pension and retirement, Zhang lost the case due to the fact that he had already accepted severance pay.

The second case, involved a thirty-six year-old man by the name of Wei. After not receiving overtime pay from his employers, Wei confronted the company only to be informed that his yearly contract would not be renewed. Wei sued the company for overtime back-wages but lost due to insufficient evidence.

Gallagher noted that the important aspect of both cases was not the outcome of each labor dispute, but the manner in which the two parties pursued legal action. An important difference between the two men was their age. Whereas Zhang worked primarily under a socialist legal system, Wei experienced most of his adult life under the reformed legal system. That difference was evident in each man’s perception of the legal system, and his knowledge of his rights. While Wei immediately took his dispute to court, Zhang first approached local governmental agencies, such as the Shanghai Bureau of Labor and Social Security, the Shanghai Mayor’s office, and the Shanghai Municipal Trade Union, in order to petition for governmental action.

In her research, Gallagher observed that while Wei blamed himself for not providing sufficient evidence in court, Zhang blamed the government and the corruptness of its ministers. Moreover Zhang avoided talking about legal facts, stressing his contribution to the nation and his part in helping to build socialism during the Cultural Revolution as reasons for why he should be reinstated and receive his pension. Professor Gallagher explained that, “[Zhang’s] perception of the legal system...and of access to justice is shaped by his connections to the past, and his former identity under socialism.” Interestingly, in spite of the legal action Mr. Zhang pursued, he never actually accused the company of doing anything illegal; their actions were simply immoral in his eyes.

The two cases are not entirely unique. According to Professor Gallagher, the contrasting attitudes of the two men and the way they pursued legal action represent a larger national trend within China which shows younger workers taking action to defend their rights against employers, while socialist-era workers experience difficulty adapting to the legalities of the new system.

***
Mary Gallagher is an associate professor of political science at the University of Michigan and serves at interim director of the university's Center for Chinese Studies. She studies Chinese politics, law and society, and comparative politics. Professor Gallagher is currently working on two projects. The first, funded by a Fulbright Research Award and the National Science Foundation, examines the development of rule of law in China by examining the dynamics of legal mobilization of Chinese workers. "The Rule of Law in China: If They Build It, Who Will Come?" focuses on the demand-side of rule of law through an exploration of legal aid plaintiffs in Shanghai, a four-city household survey on legal knowledge, attitude, and practice, and in-depth case analysis of labor disputes. The second project examines labor standards and practices in four Chinese regions. One goal is to find if there are diffusion effects in legislation, court behavior, and labor practices across different regions. Another goal is to look for evidence of a "race to the bottom" in labor standards and social welfare not between China and other competing economies, but within China’s own domestic economy.

USC student Damon Ferrara is majoring in international relations and East Asian languages and cultures. He has studied in Nanjing and Taipei and is a staff writer for USCI's US-China Today.