Professor Jean-Pierre Bardet, chair of the Sonny Astani Department of Environmental and Civil Engineering, was part of a U.S. delegation visiting the mountainous terrain of Sichuan Province in western China in August. 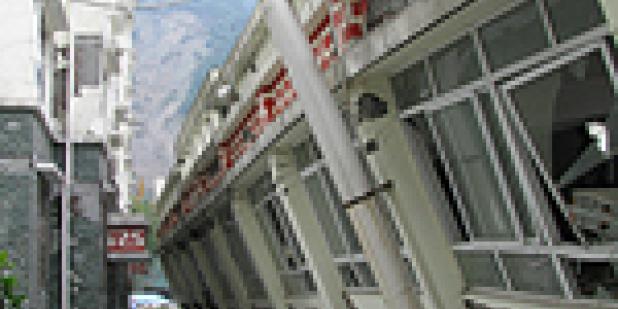 This article was originally published September 3, 2008 in USC News

Professor Jean-Pierre Bardet, chair of the Sonny Astani Department of Environmental and Civil Engineering, was part of a U.S. delegation visiting the mountainous terrain of Sichuan Province in western China in August, after a powerful earthquake struck the region on May 12.

The quake, which measured 8.0 on the Richter scale, was the worst one since 1976, when a temblor ripped through Tangshan, officially killing more than 240,000 people. The quake leveled a few cities such as Yingxiu and Beichuan, killing at least 90,000.

Bardet said the devastation was horrific. Roads were destroyed, bridges collapsed, buildings crumbled and the linings of tunnels cracked.

“More than 200,000 buildings were totally destroyed, wiped out, as well as 6,900 school buildings,” he recently told an audience of fellow faculty, students and a few local engineers on campus. Invited engineers included Endi Zhai, principal engineer at Kleinfelder, Irvine, and Craig Davis and Liping Yan, both engineers at the Los Angeles Department of Water and Power.

“Several millions of people had to move in the aftermath and find shelter in temporary housing, which is like moving the city of Los Angeles out of California,” Bardet said. “The estimated total cost of the disaster is about $100 billion.”

Bardet said the quake occurred on a thrust fault system called Longmenshan, which runs along the northwestern margin of the Sichuan Basin at a depth of about 19 km below the surface. It lasted about two minutes, but was actually two major ruptures that occurred about 10 to 20 seconds apart.

Strong motion sensors recorded the ground moving at approximately 1.3 meters per second, which is considered a strong shaking, and the maximum tectonic uplift was reported to be 5 to 6 meters, Bardet said.

But that wasn’t the fastest ever recorded. During the Northridge earthquake of 1994 - the first to strike directly under an urban area of the United States since the 1933 Long Beach earthquake - the ground moved 1.8 meters per second.

Bardet visited several cities during his tour, including Xuankou and Gaoyuan. He also surveyed damage in Chengdu, capital of Sichuan Province in Dujinagyang, which is nearest the epicenter, and Yinxiu, where one rescue team reported only 2,300 survivors out of a total population of about 9,000.

The delegation included a team from the Earthquake Engineering Research Institute, an Oakland-based nonprofit organization, and the Geo-Engineering Earthquake Reconnaissance, an organization supported by the U. S. National Science Foundation.

The Earthquake Institute team members were Marshall Lew, MACTEC Engineering and Consulting Inc., in Los Angeles; David Friedman and Dennis Lau of Forell/Elsesser Engineers Inc., and Laurie Johnson, an urban planning consultant, all in San Francisco; Tricia Wachtendorf of the Disaster Research Center at the University of Delaware in Newark; and Jian Zhao of the University of Wisconsin at Milwaukee.

The Geo-Engineering team members were Bardet; David Frost of the Georgia Institute of Technology, Savannah; and Tong Qiu of Clarkson University in Potsdam, N.Y.

The group traveled from city to city via four-wheel drive SUVs under the guidance of the Chinese Earthquake Authority. Helicopters or aircraft were prohibited from flying in the area, “certainly for military reasons,” Bardet said. “They had only been permitted to fly in the weeks after the earthquake for rescue efforts.

“Roads in the mountains affected by the quake were extremely unsafe due to landslides and rock falls that could be triggered at any time by rains and aftershocks,” he said. “Many cars crushed by large rocks had been discarded on the roadside and stood as reminders of the constant road dangers from landslides. “

Bardet inspected schools in Dujiangyan that had been demolished, observing playgrounds that had been transformed into fields of debris.

“The buildings are all masonry, made of bricks,” he said. “Very poorly built schools by our construction standards. We would not dare to build like that in California.”

In Beichuan, to the north, an estimated 80 percent of buildings in the old town were destroyed, and 60 percent in the new town was thought to be ruined. Yingxiu to the south was completely obliterated, he said.

There were possibly as many as 10,000 fast-moving landslides after the quake, Bardet said, which caused houses, buildings and bridges to crumble and tunnel entries to be buried.

Thousands of people were evacuated from Beichuan on May 17 when one such lake threatened to burst, according to news reports in the China Daily. Bardet said about one million people all over the region were evacuated due to landslides, floods and other after-effects of the quake.

Bardet said he took thousands of photographs, which he plans to use to build a Google map of the devastation. The map will feature annotated and geo-referenced photos allowing the public to relive his experience during this post-earthquake reconnaissance trip.

He said it would be available online through the Sonny Astani Department of Civil and Environmental Engineering Web site.

He held out little hope that some cities would be restored.

“It will take years to reconstruct the roads, the bridges, the hydroelectric power plants and all the buildings,” Bardet said. “Some of these cities will probably be relocated, there is no point rebuilding them where they are.”