With the 50th anniversary of the world’s first gay pride parade in Los Angeles, we look across the Pacific at the two very different climates provided to LGBTQ individuals in China and Taiwan. 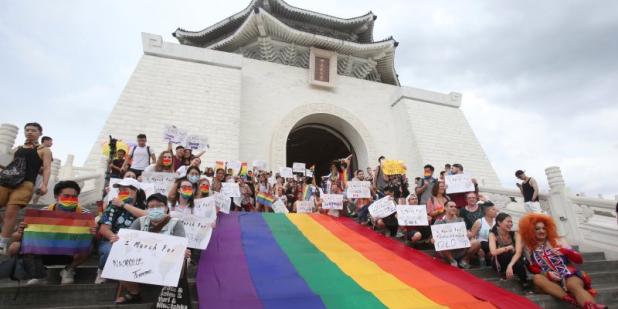 Fifty years ago the world’s first gay pride parade took place in Los Angeles. Progress has been slow since then in affirming that LGBTQ people in America are entitled to equal rights. The U.S. Supreme Court ruled in 2015 in favor of same-sex marriage and last month the court ruled that civil rights employment protections enacted in 1965 applied to gay and transgender people. Change has also come, slowly, for LGBTQ people in China, though progess has been rapid in recent years in Taiwan.

Li Yinhe, a pioneering scholar of sex and gender roles in China, noted in 2014 that most Chinese were indifferent to homosexuality and same sex marriage. In 1997, the government removed homosexuality as grounds for prosecution under hooliganism and in 2001 the Ministry of Health removed homosexuality from its list of mental disorders. Still, Beijing Normal University researchers found that while 89% of gay teenagers had come out to someone, only a quarter had come out to their parents or teachers. Depression and fear of rejection was common among LGBTQ teens. In 2016, China’s media regulator banned all LGBTQ scenes to crackdown on “vulgar, immoral and healthy content.” According to a UN Development Program survey over half of China’s LGBTQ population reported unfair treatment or discrimination, especially at home. Many report suffering physical or emotional violence.

That UN study, however, highlighted how attitudes towards LGBTQ people are changing in China, particularly among younger people. Only 9% born since 1990 said they would reject a gay child. Businesses are shifting too: an ad for Alibaba’s Tmall this year depicts gay and lesbian couples. Same-sex marriage is still not permitted, but Blued, a dating app for LGBTQ Chinese has taken off and is expanding beyond China. Ex-police officer Ma Baoli created Blued while he was still on the force. Yesterday, BLCT shares rose 46% and the company raised US$85 million with its NASDQ initial public offering.

The internet has long provided Chinese with a relatively safe space to talk about their sexuality and Yang Yifan of East China Normal University uses the case of a lesbian college student who sued the Ministry of Education over homophobia in textbooks. Yang argues that social media has enabled sexual and gender minorities to support one another and to reach the broader public and, in effect, to bargain with the party-state. Qiu Bai (a pseudonym) lost in court, but generated widespread debate in China. When Sina Weibo announced in 2018 that it would delete posts related to gay themes, popular pushback was overwhelming. People’s Daily, the Communist Party’s mouthpiece, used its Weibo account to say that the the government was not backtracking from its tolerance of homosexuality and Sina Weibo said it would target pornography, not gay material.

Social attitudes have shifted even faster in Taiwan and the law has responded.  In 2017, Taiwan’s Constitution Court ruled that it was unconstitution to deny same-sex couples the right to marry and directed the Legislative Yuan to bring the law into compliance. Despite strong opposition from conservative groups, last year Taiwan became the only place in Asia where same-sex marriage is legal. The landmark decision was largely ignored on the mainland, with just one English-language newspaper mentioning it.

Tiny compared to last year’s 200,000 strong Taiwan Pride parade, many people still turned out in Taipei on June 28 to celebrate LGBTQ pride. The bigger event is scheduled for October.

In 2019, Taipei’s Museum of Contemporary Art hosted Asia’s first major LGBTQ art show that featured 50 works by 22 artists. While these freedoms are still new, the gay happiness index ranks Taiwan as the 34th in the world comparied to the PRC’s 63rd (the U.S. came in at number 26).

Homosexuality is still illegal in 35% of United Nations member states. Fewer than 30 countries recognize same-sex marriage. In the U.S., China and Taiwan LGBTQ acceptance is not complete, but the overall shift has been relatively rapid. In 1996, only 27% of Americans told Gallup pollsters they supported marriage equality. In May, 67% told Gallup they supported it. Young people in China seem similarly comfortable with it, but legal change will likely have to come from the party-state rather than judicial action.