History and China's Foreign Relations: The Achievements and Contradictions of American Scholarship

Historians, political scientists, and policy analysts discussed whether or not studies of the past help to illuminate the China's foreign affairs in the present. 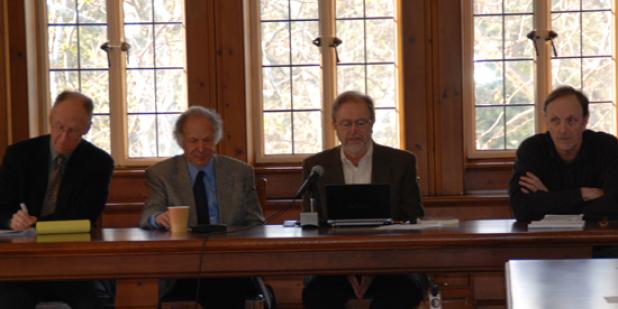 Can studies of Chinese imperial era foreign affairs help those developing America's policies toward contemporary China? This was the question leading historians, political scientists, and policy analysts addressed on February 17, 2008 at a USC U.S.-China Institute symposium entitled "History and China's Foreign Relations: The Achievements and Contradictions of American Scholarship.” The public symposium followed a two day private workshop where participants debated what lessons could be derived from the such studies and whether or not they were relevant to contemporary policy-makers. Although the conference speakers participated in closed workshops throughout the weekend, a summation and analysis of what was discussed were presented to the general public on Sunday afternoon at Doheny Memorial Library.

[The conference papers were originally shared here, but revised versions are now available in a special double issue of The Journal of American-East Asian Relations (v.16, n. 1/2 2009) and in a book Past and Present in China's Foreign Policy (2011).]

Keynote speaker Harry Harding, a Professor of International Affairs at George Washington University, began with a personal analysis of what implications the history of China's foreign relations has on the nation's current foreign relations.

Harding proceeded to break down his answer into five parts, the first of which was the agenda of problems left over by history continues to resound in modern day society. These problems tend to deal with China's territorial boundaries, Western imperialism in China, and China's status as a direct descendent of a colonial empire. Although he acknowledged that some of these issues have been resolved, such as China's border disputes with Russia, he averred that many of these issues still remain unresolved and unstable, such as the issue of Taiwan. The second manner in which Harding believes the history of China's foreign relations has affected present day foreign relations is a product of history providing a narrative of how China has related to other countries. He maintains that it is this narrative that illustrates how things have changed over time and prompts foreign policy to change with it. The third implication of history Harding presented was that history can become a large problem if two societies remember or weigh the same event differently. Although the Nanchang Massacre and Tiananmen Square were cited as two prime examples in which this has occurred, he noted that this problem can, in fact, be resolved through methods such as reconciliation, apologies, and the publication of textbooks. The fourth implication Harding presented was that history can be seen as a set of lessons that have come from the past but are relevant to the future. He stated that while the past may not be analogous to the present, the lessons of past heroes and villains can provide a framework through which future villains and heroes can be assessed. Harding summed up the fifth, and most complex, narrative of what implications China's history of foreign relations has on current foreign relations by identifying 3 sub-narratives. The first of the three subnarratives is that China sees itself as the political and social center of the world. The second contrasting sub-narrative illustrates China as a modern nation state that sees itself as humble and quickly developing in a contemporary world. This narrative presents China as a more confident nation that is successfully emerging and garnering respect within the international community. The third sub-narrative depicts China as an unstable state whose large size and diverse population makes it vulnerable to invasion or attack. Harding identified this large and diverse environment as the primary factor that fosters domestic contradictions and subsequently makes China an easy target to be taken advantage of by other states. He also speculated that it is this very environment that may push China to strive to deter others, only making China more insecure and further perpetuating the vicious cycle.

Following Harding's summary, University of Chicago historian James Hevia stressed the importance of Chinese history on foreign policy. Hevia contended that it is essential that Chinese history remain in the consciousness of policy makers because it is always in the consciousness of others. He additionally asserted that in order for history to be useful in shaping current and future foreign policy, the confrontation of both unpleasant and pleasant events alike must be made.

Stanford University research fellow Alice Lyman Miller shifted gears by addressing another heavily debated question: Is it useful to generalize Chinese behavior over long historical periods of time? Lyman declared that making this sort of generalization is useless, as each era experienced different problems and threats. In addition to generalization, Lyman also discussed the nature of warfare and how it reflected the Chinese state throughout the years. Lyman maintained that by surveying the battles and wars throughout Chinese dynastic history, Chinese strategic culture can be better understood.

University of Virginia political scientist Brantley Womack followed with an analysis of the asymmetries occurring within China, the asymmetry of Chinese-Vietnamese relations, and how the United States can learn from both. Womack contended that three asymmetries occurring in China are the asymmetry resulting from the negative consequences of the excess of information available to the general public, the asymmetry of language and culture, and the asymmetry of the nation's size and why it is, and remains, so big. Womack then cited the war between China and Vietnam as one specific example of an asymmetrical relationship that was successfully resolved. Relations between China and Vietnam today are friendly and cooperative despite the history of war between the two states. According to Womack, this is mainly because neither side still sees the other as a threat. From this example, Womack concluded that in order for two countries to develop stable bilateral relations a smaller nation must show deference to the larger nation, while the larger nation must respect the smaller nation and its autonomy. Womack argued the U.S. can learn important foreign policy lessons from China and Vietnam. The U.S. often fails to respect smaller nations, a mistake that will damage future U.S. – China relations, especially given China's rise as a regional power in Asia. Womack further stressed that the U.S. can learn from China by studying China's history within the context of its political and economic successes rather than its failures.

Finally, Michael Swaine of the Carnegie Endowment summarized the weekend's discussions and outlined key points.  First, Swaine concluded that it is historically incorrect to say that China sought to assert preemptive military power in Asia. Second, strong Chinese states did, in fact, seek to neutralize potential threats and used peaceful and non-peaceful means to do so. Third, China was not driven over centuries of rule to expand its territory based on an imperialistic mission, as the nation was unified well before that era. Fourth, the influence of Chinese history on China's present foreign policy is largely reliant upon what the Chinese believe that history to be. The fifth and final point that Swaine presented questioned the extent to which asymmetrical relationships could be applied to modern relationships, particularly the relationship between the US and China, and China and many European nations.

Although no definitive answer as to whether or not the study of Chinese imperial foreign affairs helps those developing America's policies toward contemporary China was arrived at upon the completion of the symposium, the variety of insightful and thought provoking analyses Harding, Miller, Womack, Purdue, Hevia, Swaine, and Wills provided was able to construct a solid foundation on which an exact answer could later be derived.

The papers authored by the symposium participants are currently be revised and will be published in the Journal of American-East Asian Relations. Journal editor Charles Hayford was among those participating in the workshop.

John Wills, Jr. is professor of history emeritus at USC. He is the conference organizer and continues to work on China's foreign and trade relations. He is the author of Pepper, Guns, and Parleys: The Dutch East India Company and China, 1662-1681 (Harvard, 1974), Embassies and Illusions: Dutch and Portuguese Envoys to K'ang-hsi, 1666-1687 (Harvard, 1984), and Mountain of Fame: Portraits in Chinese History (Princeton University Press, 1994; paperback 1996). He co-edited From Ming to Ch'ing: Conquest, Region, and Continuity in Seventeenth-Century China (Yale, 1979; paperback, 1981).

James Hevia is a professor of history at the University of Chicago. His research has focused on empire and imperialism in eastern and central Asia. Primarily dealing with the British Empire in India and Southeast Asia and the Qing Empire in China, the specific concerns have been with the causes and justifications for conflict; how empire in Asia became normalized within Europe through markets, exhibitions and various forms of public media; and how the events of the nineteenth century are remembered in contemporary China. Current research centers on how European empires in Asia developed and became dependent upon the production of useful knowledge about populations and geography to maintain themselves.

Harry Harding is University Professor of International Affairs at George Washington University. From 2005 to 2007, he served the Eurasia Group as Director of Research and Analysis, a political risk advisory and consulting firm headquartered in New York.  A specialist on Asian affairs with a particular interest in China, he is the author of A Fragile Relationship: The United States and China Since 1972 (Brookings Institution Press, 1992), China and Northeast Asia: The Political Dimension (University Press, 1988), China's Second Revolution: Reform After Mao (Brookings Institution Press, 1987), and Organizing China: The Problem of Bureaucracy, 1949-1976 (Stanford University Press, 1981). He has published articles in a wide range of scholarly and policy journals, and serves on the editorial boards of the China Quarterly and the Journal of Democracy.

Alice Lyman Miller is a research fellow at the Hoover Institution at Stanford University and general editor of and contributing author to Hoover's China Leadership Monitor. She also teaches as visiting associate professor in the Departments of History and Political Science at Stanford. She is the author of Science and Dissent in Post-Mao China: The Politics of Knowledge (Washington, 1996).

Brantly Womack is a professor of Political Science at the University of Virginia. He is the author of China and Vietnam: The Politics of Asymmetry (Cambridge, 2006) and Foundations of Mao Zedong's Political Thought, 1917-1935 (1982) and co-author of Politics in China (1986). He has edited and translated three additional books.