Growing up in China, Haochen Wang struggled with his studies. But after deciding to learn for fun, not validation, this USC 2019 salutatorian found his passions: math, science and even music. 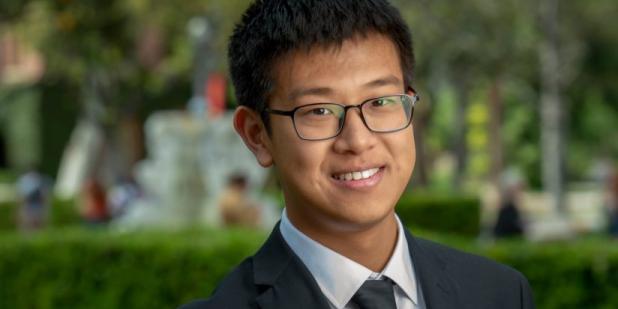 In middle school in China, Haochen Wang would dread getting his grades back. In a selective math and science program, the teacher would read the test scores aloud.

“They started with the highest [scores],” he said. “Very often, I was in the second half.”

Wang, who grew up in a port town in Anhui province, would study around the clock — hours every night and the entire weekend — determined to be a better student. One day, he went to his teacher’s office hours and asked what he could do to improve. He knew he took copious notes and never missed a class.

“He just told me he didn’t know,” Wang said. “I was so devastated. Teachers, they always told us the fantasy that if you worked the hardest you will be the best — the world will reward you for the work you put in. In middle school, I learned that was not true.”

Wang, a 2019 salutatorian, is graduating this month with bachelor’s degrees in astronomy and mathematics at the USC Dornsife College of Letters, Arts and Sciences. In the fall, he’ll start a PhD program in physics at the Massachusetts Institute of Technology. He’s contributed to research all four years at USC, studying the sun’s activities and assisting a NASA mission by observing and capturing images of Jupiter. He recently authored his first paper, working with researchers at JPL, on the search for low frequency gravitational waves.

Looking back over the last four years, sometimes he feels like pinching himself.

“It’s totally unimaginable, like 10 years ago, that I would go to a school like USC and then MIT,” Wang said. “Even MIT, I almost didn’t apply. I did my application on the day of the deadline because I did not think I would have much of a chance to get in.”

How this USC salutatorian started studying for fun

Education has always been No. 1 to Wang. Anhui is one of the poorer provinces in China, he said. When he was very young, living conditions were tough. He shared a cramped apartment with his parents and grandparents. They didn’t always have their own bathroom. The roof leaked when it rained. His parents are physicians, which wasn’t a high paying job in China.

To learn something, to explore something — the only reason to do it is because you like it.

“They always asked me about grades, which was both a good thing and bad thing,” he said. “It was a very high stress environment.”

Back in middle school, after being discouraged, Wang decided to change his perspective. He would no longer do math or science for validation. He would do it for fun.

“If it’s something you feel passionate about, you should pursue regardless of the results,” he said. “Everybody grows in different ways. To learn something, to explore something — the only reason to do it is because you like it.”

Wang has applied this philosophy to other interests too. At age 13, he got a hold of his aunt’s Carmen CD, a soundtrack of the French opera. He was obsessed with the music — listening to it over and over. To tap into his new-found love of music, his parents got him a keyboard.

Then, during his junior year in high school, he was an exchange student in Portland, Oregon. Walking in the halls of Madison High School, one of the first things he saw was a flyer for choir auditions.

“I had never sung in China before. Music is not a big part of the middle school and high school education [there],” he said.

After getting into choir, something clicked.

“I loved it immediately,” he said of performing with a group.

Salutatorian sings with the Stones

While at USC, it happened again. He heard of the USC Thornton Chamber Singers and got in. He later found out the ensemble was full of USC Thornton School of Music students studying at the professional level. Over the past four years, he’s performed at the Walt Disney Concert Hall and alongside The Rolling Stones, performing “You Can’t Always Get What You Want” during the Desert Trip Music Festival.

“I had never seen that many people in my life before,” he said of the audience.

The funny thing is, Wang didn’t know much about The Rolling Stones, which he attributes to growing up mostly in China.

“My friends — they were crying,” he said. “I was like, why are people overreacting? Later, people told me they are huge deals.”

Ever since, it’s been a hot topic. Professors brought it up when he was visiting graduate schools.

“Everyone wants to ask about it,” he said with a laugh.

Wang has another reason for pursuing music: He loves math and science because he is curious about the laws of nature. Music, on the other hand, is all about telling stories and expressing feelings. It’s that mix that helps him feel connected with people.

Although becoming a professor and researcher is his ultimate goal, professional musician is now on his list, too. And when he gets to MIT, he’ll be looking for a choir flyer.