Former Trojans team up to take American football to China 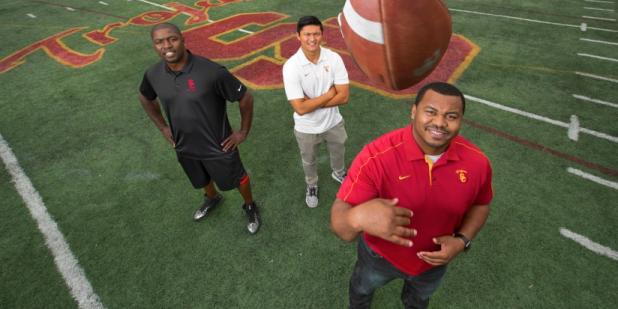 ina might be the last place you’d expect to find an American-style football camp. That’s exactly why a pair of former Trojan football players decided to launch one there.
The Student-Athlete Experience (SAE) is the brainchild of Chris Barrett ’07 and Joesph Krassenstein ’15, former USC football players who saw an opportunity to provide a unique experience for Chinese youths: a program combining on-field training with concentrated lessons in English.
“I saw the high demand for English education, and I saw how fast football was growing in China,” Barrett said. Add the huge popularity of soccer and you have a perfect storm: He and Krassenstein expect to find more than a few promising kickers and punters among the campers.
Introducing student-athletes
The program is also unusual in that it focuses on training the youngsters as student-athletes. It’s a concept unheard of in China, where promising athletes progress down a different track from academically focused youths.
The intense SAE program has two weeklong sessions starting July 14. Students will spend half of each day in the classroom and the other half on the field. In the evenings, activities will include motivational speakers and football-related movies.
“It’s not just a sports camp; it’s also an academic camp. It’s multifunctional,” Krassenstein said.
By helping improve the participants’ English as well as their football skills, the program makes the students more appealing to American schools they might be interested in attending.
“Something like playing football makes them more well-rounded,” Krassenstein said.
Unique facility
The camp will be held in Foshan, a city of about 7 million in the Guangdong province about 75 miles west of Hong Kong. The site is the Foshan Skyway Centre, one of the few stadiums outside North America dedicated to American football and the only one of its kind in China. The facility includes exercise and weight facilities, a cafeteria, classrooms, a dormitory and an NFL-regulation-sized playing field.
In addition to Barrett and Krassenstein, camp coaches include USC veterans Will Poole, Kevin Thomas Jr. and Mike Williams and former UCLA assistant coach Quincy Avery. USC alum Christina Napolez will handle the classroom duties.
For more information, visit the program’s website at saecamp.com.