USC International Artist Fellow Fei Kayser's script was selected to be performed at the Pasadena Playhouse. 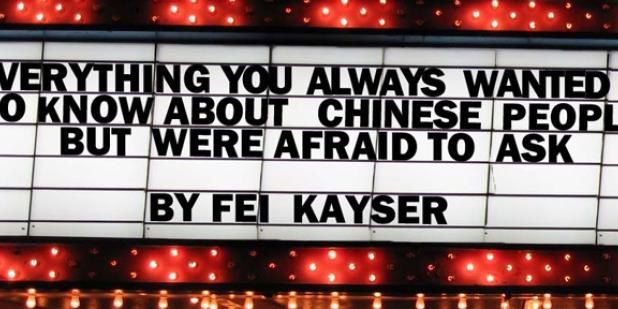 Originally published by the USC Office of International Services on April, 30, 2014 by by Lydia Siriprakorn.

Fei Kayser may be one of USC’s first International Artist Fellows, but she certainly hit the ground running when she arrived last summer. The Chinese native is only in the first year of her MFA in Dramatic Writing in the School of Dramatic Arts, and her play, Everything You Always Wanted to Know About Chinese People But Were Afraid to Ask, was selected for a staged reading at The Pasadena Playhouse on April 29.

Everything You Always Wanted to Know About Chinese People But Were Afraid to Ask is a series of monologues set in contemporary China. Kayser uses soliloquy to get the characters to open up. “If you’re not in China, you wouldn’t get the chance to talk to a stay-at-home mom. I wanted to show the side of life in China with real factors.”

The monologues are from the perspectives of contemporary Chinese people – characters that are real, not stereotypes – including a research botanist, a prostitute, an economics graduate student at a Chinese university, and a Chinese elder who  lived through famine, just to name a few. “A lot of people outside of China have little contact with Chinese people, except maybe a waiter or a doctor,” she says. “I wanted to do Chinese characters that the audience hadn’t met yet.”

Kayser’s script was selected as part of the playhouse’s Greenhouse program, which selects new plays written by three first-year MFA in Dramatic Writing students at USC. Its mission is to develop plays that further the playhouse’s commitment to diversity. And she is no stranger to crossing cultural boundaries. The international playwright has written for stage, TV and film, print, and taught American and British literature and film in China. After graduating from Yale University with a degree in theater studies, she returned to China and founded a screenwriting program at a film company, where she also served as a consultant in scriptwriting. For the next two years, she will share her talent with us here in Los Angeles.

Kayser is one of four fellows who make up the USC International Artist Fellowship Program’s inaugural group. Provost and Senior Vice President Elizabeth Garrett spearheaded the program’s development, which strives to foster an “international arts conversation” between USC and emerging artists from the Pacific Rim, Southeast Asia, and Latin America.